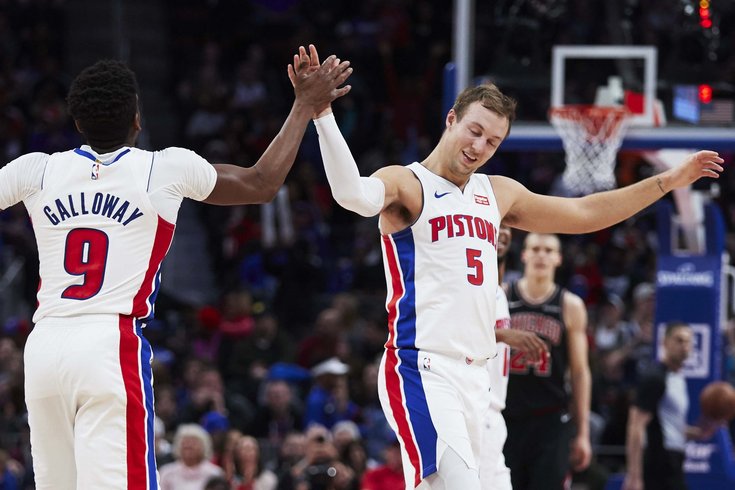 Detroit Pistons guards Langston Galloway and Luke Kennard are both reportedly on the Sixers' radar.

The Sixers are reportedly interested in Pistons guards Luke Kennard and Langston Galloway, along with current free agent forward Jeff Green, according to a report from the Inquirer's Keith Pompey.

Pompey's report follows a week in which the Sixers have been linked to just about every theoretical trade target on the market, from Washington's Davis Bertans to Denver's Malik Beasley. Most of the players the Sixers have been connected to have shared one common characteristic — plus-shooting from deep.

That is not necessarily the case for Galloway, who is in the midst of a career-year from deep (39.9 percent) but is a tick above average (36.4 percent) over the course of his career. The St. Joe's product is a combo guard, but not necessarily in a good way — he has the size of a point guard but has transitioned into more of an off-guard role over the years.

Galloway's value would largely be defined by his catch-and-shoot numbers from deep, which have been excellent this season but not necessarily a strength year-to-year. As a buyout candidate (Galloway is on the final year of a three year, $21 million deal), Galloway would make some sense. But packaging one or more of Philadelphia's few movable contracts only seems to make sense as a fallback plan.

Kennard, on the other hand, is a bit more interesting. He has missed some time recently with a knee injury, but the third-year guard has taken a step forward on offense this season, maintaining good efficiency from deep while adding more playmaking and improving his finishing around the basket.

As a catch-and-shoot player, Kennard has been excellent from Day 1 in the NBA, and his secondary creation skills would give the Sixers a bit of flexibility with their lineups down the stretch and in a playoff setting. Playing Josh Richardson as the nominal backup point guard in the playoffs would be an easier sell offensively if someone like Kennard was sharing the backcourt with him, able to create for himself and others when things break down.

The question is more about whether he's available at all, or what it would take to get him. Kennard's club option for 2020 was picked up by the Pistons, and Detroit has to decide whether they'd rather hold onto cost-controlled talent or move it now as they stare down the potential of a more dramatic rebuild. He seems like the sort of guy they'd want to keep around, but if not, it would be to the benefit of Philly, as Kennard is on a rookie contract and fills some offensive needs.

(Of note: Zhaire Smith and Luke Kennard's contracts could be traded for one another straight up, and the Pistons getting a lottery ticket and the Sixers getting a guy who could produce right now makes sense on a basic level. But by virtue of his production and Detroit's reluctance to move him, Kennard has a good bit more trade value than Smith at this moment, so shelve any one-for-one proposals bouncing around in your head.)

Green is the only guy of Pompey's reported trio who they could sign outright if they wanted to, and the Sixers had a representative at a workout he and his management held in Miami while they were on a recent road trip, a team source confirmed to PhillyVoice.

Due diligence is a fine enough reason to keep an eye on him, but I don't really see what purpose he would serve in Philly. He's an erratic player whose defining characteristic has been not being good at any one thing in his career, and while he might be of some value to a team in need of a big-bodied, athletic defender, the Sixers have no shortage of those and their guys are significantly better.