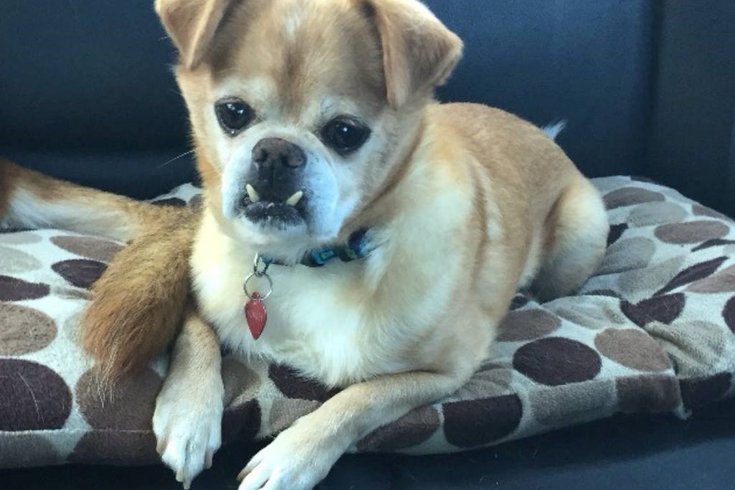 Michele and Jeff Allen founded Monkey's House, a foundation that cares for terminally ill dogs, after taking care of Monkey, pictured here, for 17 months before he passed away from a heart condition.

Where do dogs go to die?

If they're lucky enough to have caring owners, hopefully they can spend their final days in a loving home. But for those stricken with terminal illnesses living in shelters, that's not the case.

That's where Monkey's House in Burlington County, New Jersey, comes in. Michele and Jeff Allen run a sanctuary for dogs in their final days. On their small Southampton farm, sick canines can be found peacefully spending the last legs of their lives.

The story of Monkey's House begins when Michele was working at a no-kill shelter. There, she met Monkey, a small dog diagnosed with a severe heart murmur, making him unadoptable. Despite Monkey's illness taking a toll on his body, the shelter didn't intervene, which Michele found "unacceptable."

The Allens took Monkey in and had some of his medical problems treated. After 17 months with the Allens, Monkey passed away in 2015.

Fast forward to 2017, and the Allens currently house 27 formerly homeless dogs who were facing death in shelters, according to a recent CNN profile. With a team of volunteers, they rely on donations and a dog food company that provides meals for their guests in order to give these dogs a compassionate end to their lives.

They founded Monkey's House shortly after Monkey's death, and the foundation was made official in 2015. Michele believes her past job as a nurse prepared her for the work she and her husband do now.

"I used to take sick dogs and say, 'Well I can handle this -- I used to be a nurse.' Now I think I was a nurse and that was my preparation for this," she told CNN.

The Allens do have to make some tough decisions. Michele told 6ABC in January she has to turn away about two dogs a day via email, and that they'll get Facebook messages pleading with them to take a dog that's scheduled to be killed later that day.

Ultimately, however, the payoff is worth it.

"It gets frustrating at times, but it's so rewarding when you come home from work and there's 15 dogs meeting you at the door," Jeff Allen told 6ABC.

The costs of running Monkey's House are high: about $3,500 a month, according to 6ABC.

If you're interested in donating money or even volunteering, you can visit the Monkey's House website here: http://www.monkeyshouse.org