The first 'Aladdin' trailer is here and Will Smith is a very blue, muscular Genie

The Internet has reacted accordingly 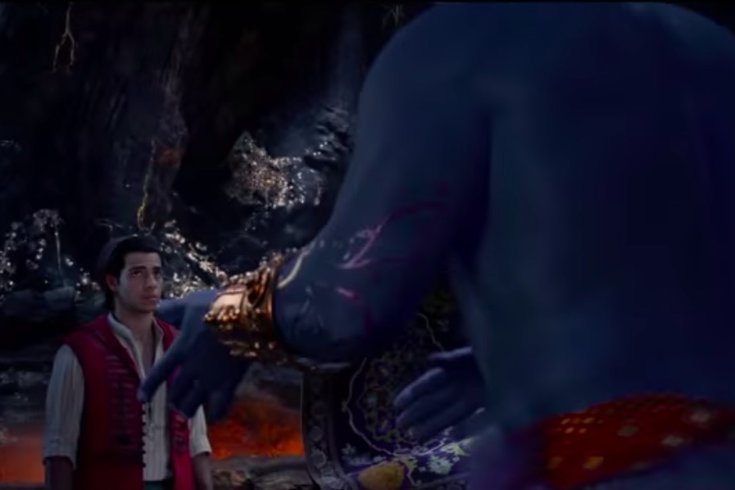 In the first trailer for Disney's live-action "Aladdin," Will Smith makes his first appearance as the shirtless, muscular, and very blue Genie.

Last year when pictures of Will Smith as the Genie in Guy Ritchie's live-action "Aladdin" surfaced, we were left with two big questions: First, what are the mechanics of his ponytail? And second, is Smith going to be blue or not?

While the first question may always remain a mystery, the latter was officially solved Sunday night when a new trailer was released for the movie, with Smith appearing at the very end to shock and delight the masses, sort of, as the floating, muscular, and, yes, extremely blue, Genie.

MORE CULTURE: Where to stream, rent and see this year's biggest Oscar-nominated movies

Though the trailer was just released during the Grammys last night, Twitter has, of course, provided much feedback on Smith's Genie.

Will Smith as the genie looks like what one of those kids from the 90’s Fruit Gushers commercials would look like if they never found a cure for their fruit curse.

First look at Will Smith as the Genie in the up coming live action Aladdin pic.twitter.com/yFLxrVJXv2

Was down for that #Aladdin trailer the whole way thru til I saw blue Will Smith. pic.twitter.com/bSBf02ul2c

So, it seems like the initial reaction to the genie is one of ... fear? Confusion? Regardless, we have some time to get used to it before the movie is released on May 24. Check out the full trailer below.