The first round of the NFL playoffs are in the books, and the contenders separated themselves from the pretenders. We have three new obituaries in the Philadelphia Eagles, Dallas Cowboys, and Arizona Cardinals.

The Eagles' 2021 season will almost unanimously be considered a success, seeing as they made the playoffs when most thought that they wouldn't. This time a year ago, the team had just finished a 4-11-1 season, and were heading into an offseason in which they were in cap hell, with no obvious answers at quarterback, and a roster littered with glaring holes. Now, after finishing 9-8 behind the No. 1 rushing offense in the NFL, the team at least had an identity, even if only for one season, and much more reason for optimism.

But there are still some honest points to be made about this team's 2021 season.

• In an effort to make more money, the NFL cheapened its product by adding a seventh playoff team to each conference. In the two years under that new playoff format, 7 seeds are 0-4, with a combined point differential of -50. The two 7 seeds this year, the Eagles and Steelers, both got absolutely smoked. The Eagles were down 31-0 at one point to the Bucs, while in the AFC, the Steelers were down 35-7 in their game against the Chiefs. Those two teams wouldn't have been in the tourney before 2020.

• The teams that the Eagles beat had a combined record of 53-99-1 (0.350). They beat one team with a winning record this season. That would be the Trevor Siemian-led 9-8 New Orleans Saints. They beat zero teams that made the playoffs. The quarterbacks that they beat were as follows:

• Whenever they played anyone half decent, they lost, often in lopsided games. The blowout loss to the Bucs in the playoffs only reinforced that while the Eagles are clearly better than the worst teams in the NFL, they aren't close to the big boys.

Going forward, it will be interesting to see what the Eagles do at quarterback. Howie Roseman emphatically endorsed Jalen Hurts as the team's starter in 2022. Of course, that doesn't really mean anything, just like it didn't mean anything when he said losing Carson Wentz would be like losing fingers. Still, Hurts may have played juuuust well enough to keep the Eagles in quarterback purgatory for at least another season, which might ultimately be worse than if he had simply been bad.

MORE: Roseman says Hurts will be Eagles starter in 2022 — what other choice did he have? | Eagles sign a bunch of guys to futures contracts | Eagles 2022 mock draft roundup, version 1.0

It's hard to decide what was more egregious — the Cowboys' idiotic play call at the end of their loss to the 49ers, or their pathetic bitching about the officiating of that play in the aftermath.

I mean, LOL. That is the dumbest play call I have ever seen in my life. Watching that live, as soon as Prescott took off running, my immediate thought was, "OMG this game is over."

I can remember covering training camp practices during the Chip Kelly years, and from one snap to the next, when they were in extreme fast tempo mode, they would get plays off from one to the next in around 10-11 seconds. And that was in an offense in which all they did was run tempo, and 10 seconds was the best they could do in a controlled practice environment without an umpire who was trailing the play from behind who had to set the ball himself before it could be snapped on the next play.

And somehow, Mike McCarthy and the Cowboys ran this play seemingly unaware that they had to depend on the umpire to make an athletic play to spot the ball in order to get the snap/spike off in time. McCarthy even blamed the official for not spotting it fast enough.

"That was the best option ... it's the right decision."

If you go back and watch the play again, the official actually did the Cowboys a HUGE favor. Watch where Prescott begins his slide. He's at the 26 yard line. That's where the ball should have been spotted. Instead, the Cowboys spotted it themselves at the 23. The official moved it back a couple feet, but not so much that the entire offense had to move back a few yards and get re-set before the snap. Had they gotten the snap/spike off in time, the Niners would have had a legitimate reason to be furious about the incorrectly spotted ball.

As players and officials left the field, bottles and assorted trash rained down onto the field.

“Stay classy Dallas.” @BabeLaufenberg reaction to Cowboys fans throwing bottles on the field and @TankLawrence blocking one with his helmet. @NBCDFW https://t.co/QEf1vu8Yo6 pic.twitter.com/L2QocwwQ6o

Dak Prescott was asked about that fan conduct at the conclusion of the game. At first, when he thought that the projectiles were being aimed at players, he was kinda like, (GASP!) "THAT'S OUTRAGEOUS!!!" When he was told the trash was likely directed at the officials, he was basically like, "Oh well in that case, they deserved it."

Realizing that heavy fines were soon coming Prescott's way, Prescott's agent or lawyer or literally anyone other than Prescott wrote the following apology on Twitter.

"I deeply regret the comments I made regarding the officials after the game on Sunday. I was caught up in the emotion of a disappointing loss and my words were uncalled for and unfair. I hold the NFL Officials in the highest regard and have always respected their professionalism and the difficulty of their jobs. The safety of everyone who attends a game or participates on the field of a sporting event is a very serious matter. That was a mistake on my behalf, and I am sorry."

In the end, it was merely the latest in a long line of Cowboys playoff choke jobs over the last quarter century. And it was delicious.

Speaking of choke artists, the Cardinals were in prime position to make the playoffs in 2020, but they lost their final two games, and it was off to Cabo.

In 2021, the Cardinals were at one time 10-2, and in a great position to land the 1 seed in the NFC. They then went 1-4 down the stretch, pissed away the NFC West division, and then got trounced in the wild card round by the Rams. In a span of about a month and a half, Kliff Kingsbury went from "This guy should be the NFL Coach of the Year" to "This guy should be fired." 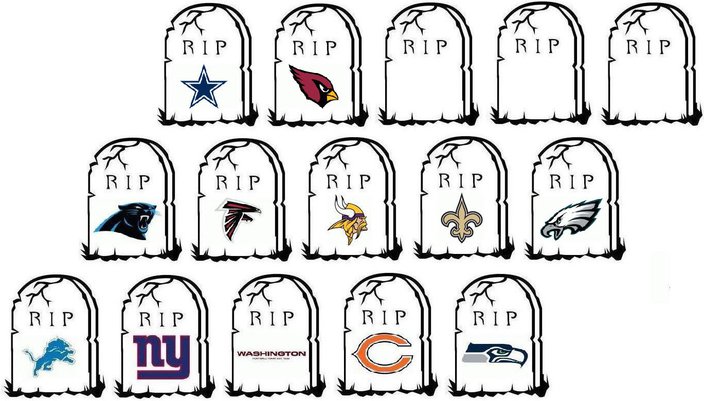 4) 49ers (11-7): I loved the Niners' matchup against the Cowboys on Sunday. The Cowboys have a playmaking defense, but they are also undersized up front, and they tackle poorly in the secondary. I had little doubt that YAC machine guys like Deebo Samuel, Brandon Aiyuk, and George Kittle would make plays, and that the Niners would have success in the run game. The one fear I had was Jimmy Garoppolo, because, well, Jimmy Garoppolo stinks. Case in point:

The Packers are another interesting matchup for the Niners this weekend. If you'll recall in the 2019 NFC Championship Game, the Niners ran for 285 yards, while Garoppolo only attempted 8 passes, like they were Nebraska in the 1990's playing Kansas. In 2021, the Packers allowed 4.7 yards per carry, which was third-worst in the NFL.

The Niners will eventually lose a game because of Jimmy G, but maybe they can hide him again in Green Bay?

3) Rams (13-5): The Rams quietly have the best defense of the remaining teams in the NFC, which is sort of a weird way to put it when they employ Aaron Donald, Jalen Ramsey, and Von Miller.

2) Buccaneers (14-4): Chris Godwin done for the season with an ACL? No problem. Antonio Brown kicked off the team? Meh. No worries. Tom Brady can win with Mike Evans, Rob Gronkowski, and a bunch of mediocre skill players otherwise.

BUT... If Tristan Wirfs (sprained ankle) can't go on Sunday, that is potentially a major problem for the Bucs, since backup RT Josh Wells couldn't block... (checks notes)... Ryan Kerrigan!

Von Miller should be very excited for Sunday if he gets to face Wells.

1) Packers (13-4): The Packers have won double-digit games 10 teams in the Aaron Rodgers era, which included a 15-win season, a trio of 13-wins seasons, and a 12-win season. This will be the fifth time they have had a first-round round bye during that span. In those four previous seasons that they earned a first-round bye, they were 3-4 in the playoffs, and never made it to the Super Bowl. I look forward to seeing how they blow it this year.