NFL: No conclusion yet on Pats' deflated footballs 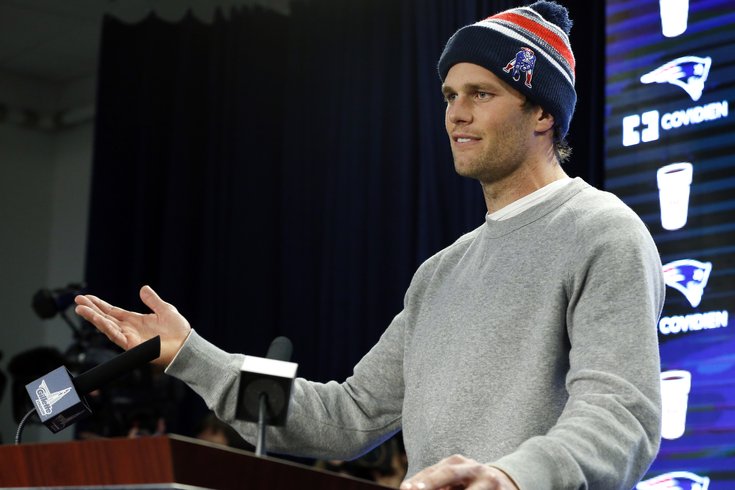 FOXBOROUGH, Mass. — The NFL says it is still investigating how the New England Patriots used underinflated balls in their last game but has no conclusions yet and no timetable for resolving the cheating accusations with the Super Bowl nine days away.

The league said Friday that evidence shows the Patriots used underinflated footballs during the first half of the AFC championship game Sunday night against the Indianapolis Colts.

It issued a statement that the Patriots have pledged full cooperation and have given the league information it requested and made personnel available upon request. Quarterback Tom Brady said Thursday afternoon he had not been contacted at that point.

The NFL said it began its investigation Sunday night and expects full cooperation from other clubs. It has hired an investigatory company to help in reviewing electronic and video information.

Patriots owner Robert Kraft said investigators were in Foxborough for three days this week after he received a letter from the league on Monday informing him of the probe.

"We provided access to every full- and part-time employee the league's representatives requested to speak with and produced every communication device that they requested to search," he said. "I very much support the league's desire to conduct a complete investigation."

The Patriots are preparing to meet the defending champion Seattle Seahawks in the Super Bowl on Feb. 1 in Glendale, Arizona.

The league said when it is able to come to conclusions, they will be shared publicly.

"Over the past several days, nearly 40 interviews have been conducted, including of Patriots personnel, game officials, and third parties with relevant information and expertise," the statement said.

"We have obtained and are continuing to obtain additional information, including video and other electronic information and physical evidence," the statement said.

NFL Executive Vice President Jeff Pash and Ted Wells of the law firm of Paul Weiss are leading the probe.

Wells was the investigator in the Miami Dolphins bullying scandal. His report last February detailed widespread harassment in the team's locker room that extended beyond the two players at the center of the probe. It said guard John Jerry and center Mike Pouncey followed Richie Incognito's lead in harassing offensive lineman Jonathan Martin.

It wants to find out why footballs were underinflated during the first half and whether "deliberate action" caused it.

"We have not made any judgments on these points and will not do so until we have concluded our investigation and considered all of the relevant evidence," the league said.

"Everything, I'm sure is going to come out in the investigation," he said when asked if the Colts alerted the NFL to the underinflated balls. "It's in the league's hands."

Brady and coach Bill Belichick said Thursday they had no explanations for how the footballs were underinflated.

"I didn't alter the ball in any way," said Brady, who said he likes footballs pumped to the lower limit of 12 1/2 pounds per square inch. "I have no knowledge of anything, any wrongdoing."

Belichick said that before this week, he didn't give air pressure in footballs much thought.

"I've learned a lot more about this process in the last three days than I knew or have talked about it in the last 40 years that I've coached in this league," he said.

Softer balls are generally considered easier to throw and catch, and quarterbacks, specialists and equipment managers are known to have very individualized preferences in how footballs are readied for games. Belichick said he was unaware of the process for game balls until the accusations were raised.

Under league rules, each team provides balls for use on offense. Referees approve the balls more than 2 hours before game time, then keep the balls until they're turned over to ball handlers provided by home teams just before kickoff.

"The playing rules are intended to protect the fairness and integrity of our games," the NFL said. "We take seriously claims that those rules have been violated and will fully investigate this matter without compromise or delay."

"Tom is a big boy," defensive tackle Vince Wilfork said. "He knows how to handle all situations, so he'll handle this with class, like he always does."

"This team has a lot of trust in Tom," safety Devin McCourty said. "Honestly, I don't think anyone in this locker room is worried about it."

Several players said they wouldn't be distracted by the investigation as they prepare for the Super Bowl.