NFL analyst: Some Eagles players questioning if Sirianni 'can truly lead this team'

These comments from NFL Network's Michael Robinson come just a few days after Lane Johnson went to bat for the new coach. 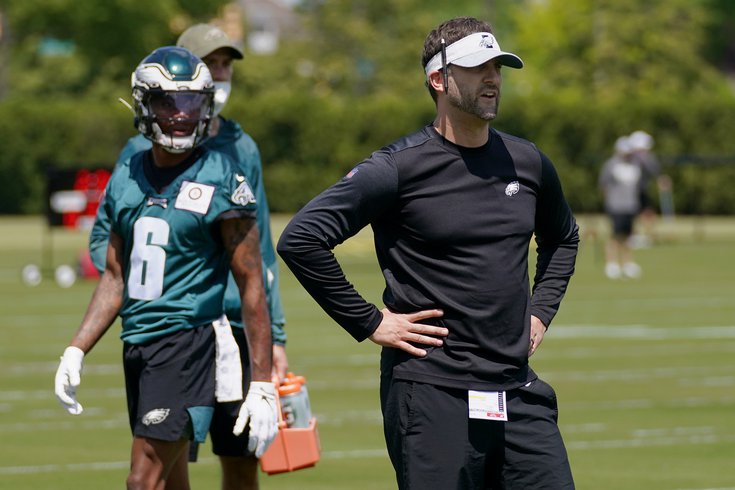 Nick Sirianni's first training camp running the Eagles hasn't even started yet — and won't for two weeks — but that hasn't stopped his own players from questioning whether or not he's up for the task at hand. At least that's the word from former fullback and current NFL Network analyst Michael Robinson.

"I don't know if he's a quarterback whisperer or an offensive guru, or whatever the case may be, but it just doesn't seem like he is that guy. It seems like Frank Reich was calling plays and Frank Reich was the juice behind that offense. So, I think it is about this team getting to know Nick Sirianni.

"I'm not going to say any names, but I know some guys in that locker room who they question this guy and they question if he can truly lead this team. And me personally, my personal thoughts on it is that maybe Howie Roseman wanted to put somebody, a yes-man, in the head coaching position because Doug Pederson didn't want to do things all the way his way. So he wanted to get a yes man in there, at least, that's what it looks like to me."

It's strange because this sounds almost exactly like what was being said about Doug Pederson following his hiring — and the departure of the coach who pushed back on Roseman so much that he pushed him all the way over to the other side of the building.

It's certainly a fair criticism to question Sirianni, given the fact that he's never been a head coach at any level before, but Robinson also played in the NFL and knows that coordinators hold a significant amount of power and depending on the situation can be almost as powerful when it comes to their respective side of the ball (see: Jim Schwartz, Eagles). The natural progression for a coordinator would be to move to a head coaching gig. Sure, a stop in college could come before that, but that's becoming less of the norm in recent years. When he was hired back in 2016, Pederson was getting the same criticism over the fact that his only head coaching experience came at the high school level, and as an NFL coordinator, he was rarely, if ever, the primary play-caller. Just a few short years later, Pederson had shown not only that he knew how to win, but that he was more than capable of pushing back on management and ownership, which depending on who you believe was part of the reason he's no longer the team's coach.

In comes Sirianni, who admittedly sucked during his introductory press conference but has seemed much more confident since then. He's going to need to grow on the job, and sure, it would make sense that there are guys in the locker room who still aren't sold on him being the right man for the job. That's part of what a first-year coach must do in his first offseason of work — get his players to buy in — with the majority of that to come during training camp.

Furthermore, it's nice to see a young, up-and-coming coach get a chance rather than seeing the Eagles trot out some re-tread looking to find success after failing multiple times elsewhere. In the big picture, what's the worst that happens? They fire Sirianni after a year and hire someone else next year? They missed out on some other coach who got snatched up elsewhere and went on to be more successful? That's fine, as there seems to be a new "hot" coaching candidate every offseason.

But then there's the upside. There's the chance that Sirianni, like Pederson before him, can catch lightning in a bottle and produce a winner when fans hardly see it coming. He also won't have any bad habits that he picked up in other stops along the way. And being that he's so young, he could connect with the players in a way other wouldn't be able to. Could he also be a yes-man for Roseman and Jeffrey Lurie? Absolutely, but if he can put together a few wins on the field, he'll likely gain the fortitude to push back more and more. If he loses, he'll be gone and none of this will matter anyway.

But for however many players there are questioning Sirianni, there are going to be just as many on the opposite side of the spectrum, as Lane Johnson recently showed when he backed his new coach and said basically the opposite of what Robinson said.

“He’s taken great command of the team early on," Johnson said on ESPN on Saturday. "I think what I appreciate about him the most is he holds everybody accountable. So, when we go to practice, it doesn’t matter if you’re a veteran or a rookie, first day. If you’re making mistakes, he’ll push you on the board. Not to call you out, but really to kinda get you better. I think what that shows is that if he can do that with veterans, then the younger guys will come along as well. That’s been my impression early on. It’s been a lot of fun, really a lot of energy. But moving forward, we have a lot to prove.”

The Eagles have a lot to prove, sure. But Sirianni has the most to prove. Maybe give him a chance first before abandoning all hope?