Could the Flyers be looking to add veteran defensemen T.J. Brodie or Andy Greene? 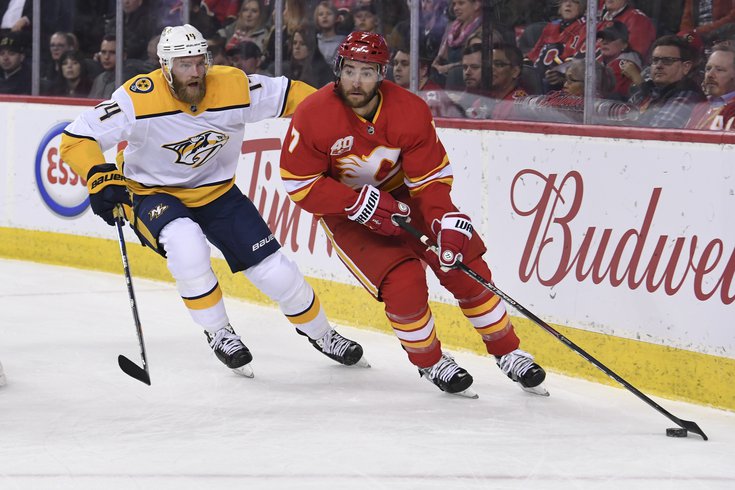 UPDATE [4:48 p.m.] — According to Elliotte Friedman, the Flyers are one of the teams interested in free agent defenseman T.J. Brodie.

Per @FriedgeHNIC, the Flyers are among the teams in on TJ Brodie. The fit makes sense in terms of him being a right-side D (though a left-handed shooter) who plays 20+ mins a night, kills penalties, skates well and moves the puck.

Last season with the Calgary Flames, Brodie finished with 19 points (4 goals, 15 assists) and was a plus-7 while averaging 20:27 in ice time.

Brodie is a solid defenseman. I'm a little iffy due to a potential Mark Giordano effect, but in fairness, he wouldn't be expected to carry a pair in Philly either. Good complementary top-4 guy. At a not-ridiculous price it could certainly work.

During that same update, Friedman also said that Andy Greene is on the Flyers' radar, but that he could prefer returning to the Islanders.

Don't forget to check in on the live tracker below for all the latest rumors...

UPDATE [12:34 p.m.] — The early signings around the NHL included some names familiar to Flyers fans, with Wayne Simmonds going to Toronto, Radko Gudas signing in Florida and Luke Schenn heading back to Tampa — as well as local product Bobby Ryan signing with the Red Wings.

But it appears the Flyers will be losing one of their depth forwards, as Tyler Pitlick appears to be signing with the Coyotes:

We've barely turned the page from the 2020 NHL season, let alone this week's draft, but it's already time to begin shifting focus to free agency, which opens at noon on Friday.

The Flyers, after losing Matt Niskanen to retirement, have a clear need on defense that general manager Chuck Fletcher should be looking to fill this offseason, while there could also be other changes on the offensive side of the puck as the team looks to improve on its surprise run to the No. 1 seed in the Eastern Conference, aided by their red-hot run before the season was halted due to COVID-19.

The Flyers didn't fare as well in the bubble, falling in the Eastern Conference semifinals to the Islanders, but now they'll have a chance to make some tweaks to the roster in an effort to improve next season, whenever that begins.

MORE: What they're saying: Potential free agent options for Flyers, and rounding up some draft grades

There are plenty of names available, and we'll have more on some of those options later today. But in the meantime, we've got a live tracker to help keep you up to date on all the latest news and rumors from around the NHL. (We'll also update the top of this post with any major Flyers news that breaks.)