How realistic a scenario is Johnny Gaudreau to the Flyers? 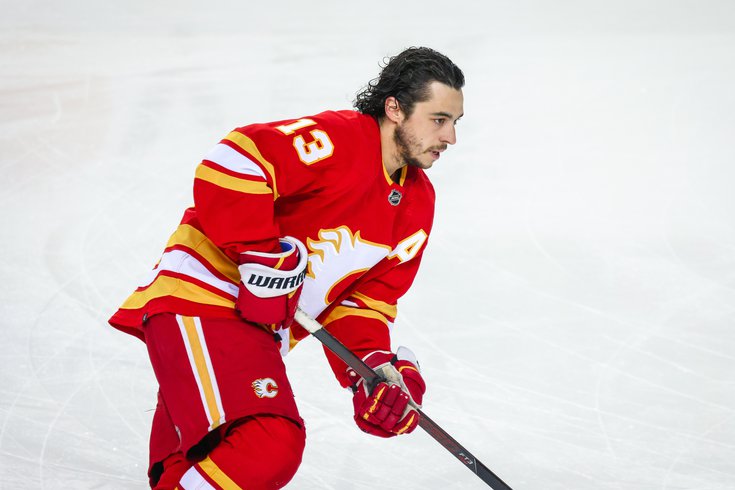 For right now, the Flyers are pretty handcuffed.

On top of being a bad team the past two years, they've become a highly expensive one.

They're right up against the salary cap with just shy of $77.4 million committed to 18 players heading into the 2022-23 season, according to CapFriendly, and just over $5 million left to fill out the rest of the roster.

It's far from a great starting point for the "aggressive retool," which was already going to take a lot of finessing and brilliant decision-making on general manager Chuck Fletcher's part if the plan really is to have the Flyers competitive again quickly.

And if part of that plan is to add a top-end offensive talent like Gaudreau or Filip Forsberg or Nazem Kadri, assuming they even reach free agency on July 13, it's going to take at least a couple of drastic cap-clearing moves because let's be real here: Gaudreau is coming off a 115-point season in Calgary, Forsberg a 42-goal one in Nashville, and Kadri an 87-point campaign in Colorado. All three of them are career bests. These guys are going to get PAID.

Affording a big-name free agent is already a tall order for the Flyers as is, and that's not to even mention the fact that Fletcher and co. will likely have to do a whole lot of convincing to sell that the team can and will be back in playoff contention.

Fun times ahead this summer...

But for now, let's just focus on Gaudreau because chatter about him to the Flyers goes back years, pretty much to the point when the South Jersey native left Boston College and broke out as a rising NHL star for the Flames. With him playing his best hockey yet on an expiring contract this season, that chatter has only picked up — The Athletic's Flames writer Hailey Salvian, for example, marked Philadelphia as a potential destination for the 28-year old left winger should he leave Calgary in a piece published on Wednesday, and local beats have also taken stock of the possibility in the past month (A, B).

Before we get into why Gaudreau to Philly can or can't work, the TL;DR of it is this: Is there a chance? Yes. How great is that chance?...I mean, it's slightly better than a snowball's chance in hell. 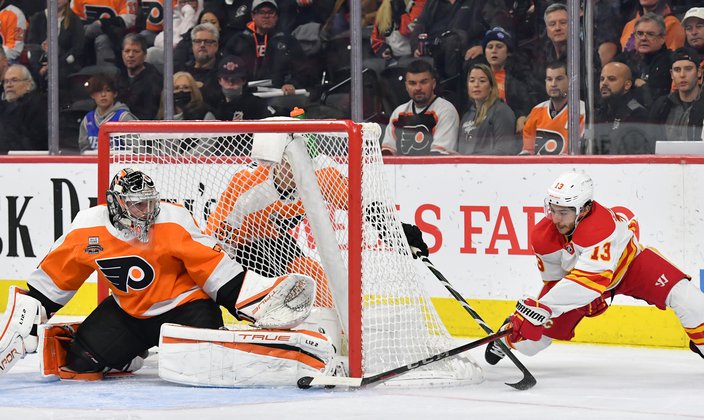 The reasons for Gaudreau to leave Calgary and sign with Philly, more than anything, are borne out of sentimentality and desperation.

• He's from Salem and he and his family still have plenty of ties to South Jersey. He went to Gloucester Catholic and came up through the area's youth and junior hockey programs, like the Little Flyers down in Aston.

• He grew up a Flyers (and Eagles) fan and has even said in the past that it would be "sweet" to play for his hometown team someday.

• Him and current Flyers center Kevin Hayes are good friends going back to their time as teammates at Boston College.

• In a lot of ways, Gaudreau coming to Philly would mirror Danny Briere signing with the Flyers back in the summer of 2007. The 2006-07 season was the team's worst as a franchise, but the front office had made a series of moves to position the club to bounce back for the 2007-08 campaign. Then they landed Briere, the undersized center who was the top prize of the free-agent class, and the Flyers were instantly back in the playoff picture. They went to the Eastern Conference Finals that year.

Now there's an undersized winger who will be this summer's top free-agent prize if he gets there, one who cheered for that Flyers team way back when. Granted, the Flyers aren't coming off their worst season ever — though it sure did feel like it often — and there aren't any Mike Richards or Jeff Carter equivalent prospects waiting in the wings this time.

• The Flyers are in bad, bad need of a fast and dynamic offensive threat. Travis Konecny's 52 points led the team and James van Riemsdyk finished as the leading goal scorer with 24, but after a season like the one the Flyers just turned in, that isn't saying much. This team STRUGGLED to score. Their 210 goals for were the second-least in the NHL — only the Arizona Coyotes scored less with 206 goals — and their power play was a league-worst out of all 32 teams at 12.6 percent.

The Flyers' offensive attack this season was slow, uncreative, and uninspiring. Putting the puck in the back of the net often looked like a messy and monumental struggle for them. Watching games just wasn't pretty.

Adding Gaudreau to the left of the top line would be a massive shot in the arm and would give opposing teams something to worry about because he's the opposite of all those things. He's an incredible skater and can create space and opportunity for himself from anywhere on the ice, as he did so often with the Flames this season and in prior ones — I sat ice level when the Flames were in town a few years ago and got to see Gaudreau's skating up close. He had the puck along the boards with a defender clamping down on him. After a couple of lightning-quick crossovers from side to side, he was suddenly free and firing a shot toward the net. It was incredible to watch in person.

• The Flyers are also in bad, bad need of a new draw. This past season inspired little outside of apathy. Watching games became a chore and attendance took a hit as a result. What to do to get butts back in the seats? How about the hometown kid who's an established NHL star and in the prime of his career? Gaudreau can't right the entire ship himself but he can immediately renew some interest. 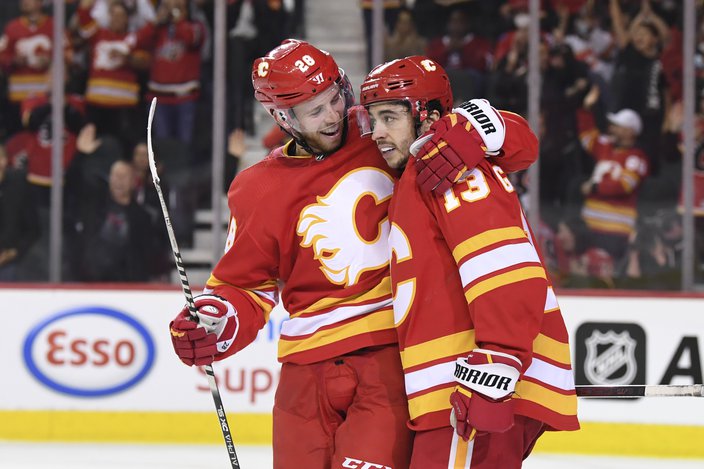 The business side is where the bulk of the reasons fall that Gaudreau won't be sporting orange and black anytime soon.

Again, Gaudreau is going to get PAID this summer. Calgary GM Brad Treliving said back in April that the Flames will "move heaven and earth" to try to keep him on board. But they're facing a heavy number of contract decisions this summer — Gaudreau (UFA), Matthew Tkachuk (RFA), Andrew Mangiapane (RFA), and Oliver Kylington (RFA) the biggest among them.

If Gaudreau doesn't get the bag in Calgary, which will likely go for 7-8 years and potentially as much as $9 million per, he'll definitely get it elsewhere.

The Flyers' problem is that unless they find a way to shed massive salaries either via trade or, in the worst-case scenario, a buyout  — like van Riemsdyk's final year at $7 million or Ivan Provorov's remaining three years at $6.75 million each — they can't spend that kind of money because they already did.

Forwards Sean Couturier's (eight years, $7.75 million per) and Joel Farabee's (six years, $5 million per) big extensions kick in with the 2022-23 season; Defenseman Ryan Ellis is expected to return off long-term injured reserve, bringing his $6.25 million cap hit back into the fold; And Rasmus Ristolainen got re-signed to that surprising five-year, $5.1 million per year extension that might be the first step toward a blueline makeover, but for now, really only serves to further restrict the books.

Going back to our look at the salary cap last month, the Flyers are carrying nine contracts that carry a cap hit of at least $5 million, and they total more than $56.3 million — nearly 69 percent of the team's cap hit for next season — and Farabee is the only player on that list below age 25.

There are also the pending deals the Flyers will have to decide on down the line. Travis Sanheim, Ristolainen's regular partner and the team's best defenseman this year, is a UFA after the 2022-23 season. Cam York will be an RFA along with a number of other guys, and then it will be goaltender Carter Hart's turn in 2024.

*Non-roster; **Did not have enough professional time to qualify for restricted free agency

Then there's the competitive aspect again.

Gaudreau just capped off a year with the Flames where he was part of a dominant top line with Elias Lindholm at center and Tkachuk at right wing. They combined for 124 goals and 301 points, won the Pacific Division, and despite getting knocked out in five games by the rival Edmonton Oilers in the second round of the playoffs, appear headed in the right direction under coach Darryl Sutter after he was hired last March.

The Flames want him back, and Gaudreau does like it over there in Calgary.

The Flyers? Well, they need to hire a coach and are taking their sweet time doing it, have the No.5 overall pick in what's being considered one of the weaker draft classes of late, and are ultimately left having to convince everyone that an "aggressive retool" is the fix for a roster that this season proved is a cap-strapped mismatch of banged-up veterans and so far underwhelming youth, all while possibly having to give away a player or two and potentially a couple of extra draft picks for no return just to get a little bit of spending money...again...

So question: Why would you pass up the money and the chance to stay put in Calgary, or to go try and win elsewhere, to come here?

Is there a chance for Johnny Gaudreau to sign with Philly? Maybe.

But it's only just a bit better than a snowball's chance in hell.