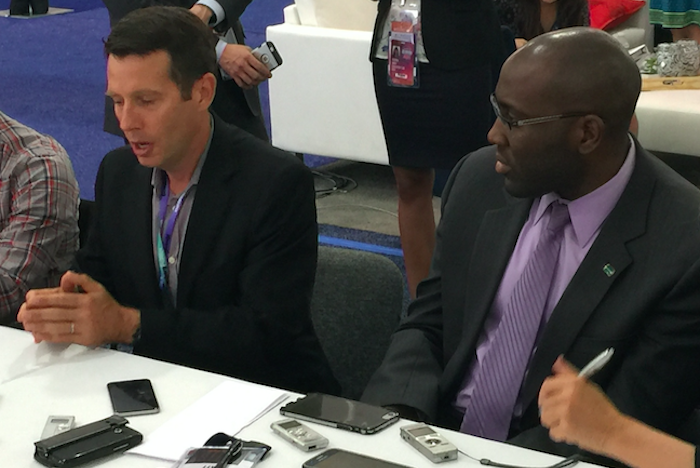 David Plouffe, campaign manager of the 2008 Barack Obama campaign, and Marlon Marshall, director of state campaigns and political engagement for the Hillary Clinton campaign, spoke about Pennsylvania's role in the upcoming presidential election at the Democratic National Convention on Wednesday, July 27. 2016.

A few hours before his former boss was scheduled to take the Democratic National Convention stage, David Plouffe – campaign manager for Barack Obama’s 2008 presidential campaign – spoke about the importance of the Philadelphia region in Hillary Clinton’s ability to win in November.

The discussion, during a daily press briefing with print and web reporters, also featured Marlon Marshall, director of state campaigns for Hillary For America, who focused on electoral map routes to victory in the unorthodox battle that 2016 presidential election has become.

“The other candidate doesn’t believe in campaign- or data organizing. Some people believe we’re in a ‘black swan’ moment and none of that will matter and they’ll win,” Plouffe said of Trump before lauding the mechanisms installed by the Clinton campaign, following in the steps of Obama campaigns. “They have a goal of registering millions of new voters and turning them out, and that still matters.

“They’re tailoring their campaign to the actual voting that’s happening, and that’s an art: When candidates are in states, where they’re going, your advertising, your social, your digital, the organization you build has to be married to when people vote.”

Plouffe discounted polls that are making headlines this far out from Election Day as far less significant than voter turnout and the like.

Marshall, who oversees state operations, said the campaign plans to establish a presence even in states they already know they won’t win.

“I believe [Hillary's] going to pick up more suburban votes support here in Delaware County and Montgomery County than [Donald] Trump may pick up in the western part of the state." – David Plouffe, campaign manager for Barack Obama in 2008

He labeled Pennsylvania as a battleground state.

“We think Pennsylvania is going to be a close race. That’s one of the reasons why we’re beefing up our organizing program here,” he said. “We have a few hundred staff already in-state and they’ve been registering voters every weekend. Having the convention here has been helpful for our organizing program.

Plouffe admitted “there’s a little more volatility” in the electoral air today as opposed to eight and even four years ago but that “my strong belief is that that volatility will benefit Hillary Clinton,” which is how Philadelphia’s neighboring counties entered the discussion. (“I don’t envy the Clinton campaign. I’m glad I’m retired,” he would later note.)

“I believe she’s going to pick up more suburban votes here in Delaware County and Montgomery County than Trump may pick up in the western part of the state. That’s my belief,” Plouffe said.

“Where Clinton has the biggest chance to gain votes, there’s more voters. Very important,” he continued. “Barack Obama’s margin here in Philadelphia, Montgomery and Delco was about 600,000. Let’s say Hillary Clinton only walked out of here with a 500,000-vote margin, which I don’t think is going to happen, Marlon would be very disappointed by that, but she would still win the state comfortably.”

He noted, however, that the female vote could help Clinton exceed Obama’s suburban margins.

“Trump, with all due respect, thinks it’s Tweeting and saying stuff at rallies,” he said. “What Marlon and his team is doing is, How do we register voters? How do we turn out people who will definitely vote for Clinton but at some risk not to vote?’ Then you have the suburban puzzle How do you maximize that? And, how do you retard Trump from gaining too much in some of his areas. That’s what the campaign is.”

He did, however, talk about a potential path to victory for Trump.

For that to happen, four things would have to fall into place: “Historically bad Democratic turnout, historically good Republican turnout, Trump over-performing even [Ronald] Reagan in some rural areas and Clinton underperforming in suburban areas.”

“I don’t think any of those things are going to happen,” Plouffe said. “Could it be a two-point race nationally? Maybe. Could it be an eight-, nine-point race nationally? My firm belief is that the fall is not going to be friendly to Donald Trump. One thing I’ve learned about going through this twice is voters take this decision very seriously, they take it more seriously as you come close [to Election Day]. Those debates are going to be important as they really do envision this person in the Oval Office.

“Hillary Clinton’s strengths were not always the strengths that you would choose for a primary, but her dependability, her strength, her competence are going to be strengths in the general election. I believe so strongly. That’s why he’s bumping up against a ceiling.”