Revised ordinances allow police officers to take disruptive minors into custody without filing charges. Instead, their parents must come pick them up 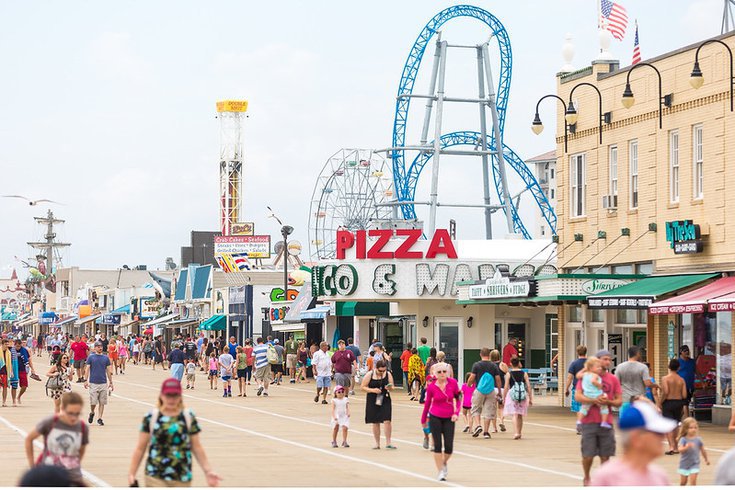 Ocean City will try to reduce crowds of disruptive teens by allowing police to detain minors instead of simply issuing curbside warnings. No charges will be filed; their parents will be called to pick them up.

When shore season gets back in swing later this year, Ocean City will try a new strategy to deal with the annual nuisance of raucous, teenage crowds taking over its boardwalk, beaches and streets.

Revised ordinances approved by city council this month give police officers the authority to detain minors for "breach of the peace" violations. The changes cover offenses such as curfew violations, excessive noise, littering, vandalism, setting off illegal fireworks and riding bikes on the boardwalk after hours, among other common issues that have led to complaints.

Instead of giving unruly teens curbside warnings, Ocean City officers will be empowered to bring these kids to the police station and call their parents to come pick them up, without filing any charges. This could serve as an unofficial pilot program for other Jersey Shore towns that have become fed up with teens disrupting life at the beach.

Shore communities have struggled in recent years to manage crowds of unattended young people, whose behavior has tested the patience of local officials, police and residents.

In Ocean City, residents have told city council that loud music, fighting and large crowds of teens have become a threat to the community's family-friendly reputation.

The revisions to local laws in Ocean City are partly a response to the juvenile justice reforms made by the state attorney general's office at the end of 2020. Those reforms, spelled out in a 33-page directive, were meant to address systemic racial disparities by limiting youth detentions and formal court proceedings that leave minors with troubling records into adulthood.

With input from police and the Cape May County Prosecutor's Office, Ocean City's 22-page ordinance places minor offenses under the municipal code for disturbing the peace. This gives police more power to intervene in disturbances without charging minors with more serious offenses.

"The ordinance amendments in Ocean City do not create any new violations or penalties that would give a juvenile a permanent record," Ocean City spokesperson Doug Bergen said. "The new designation is aimed at giving police the authority to remove offenders from the scene where they are creating disturbances, take them down to the station, and notify their parents to come pick them up."

The goal is to let parents and young people know that minors do not have free rein in the community.

"Ocean City wants to send a message that it's not going to be 'anything goes' this summer," Bergen said.

How Ocean City and other shore towns arrived at this crossroads is partly a matter of the state's legal standards and partly an outgrowth of social media, particularly during the COVID-19 pandemic when teens were left with fewer places to congregate indoors. Young people frequently use the internet as a tool to throw together sudden, massive gatherings that police departments struggle to predict and contain.

In North Jersey, nearly 5,000 people showed up in Long Branch last May for a flash party that was promoted on TikTok. Police responded in tactical gear, using smoke and a flash-bang to disperse the crowd in the middle of the night. More than a dozen people were arrested and the city issued an overnight curfew.

Similar scenes have unfolded in recent years in Point Pleasant, Belmar, Seaside Heights, Avalon and Margate, where a throng of teens overtook a Wawa and a nearby beach in 2017.

What makes the trend especially frustrating for the affected communities is that police often find the majority of teens who show up at these events come in from out of town.

Even on a smaller scale, dealing with unsupervised groups of 50 to 100 teenagers on a regular basis puts strains on police departments that have had their authority to act curtailed.

The juvenile justice reforms made by the attorney general's office require local police to issue only curbside warnings to minors for ordinance and disorderly persons offenses. That includes cases involving alcohol and marijuana.

As a last resort, when such encounters escalate, officers are permitted to take minors to police stations to have their parents called. The goal in such cases is to resolve situations without filing charges.

Cape May County Prosecutor Jeff Sutherland played an advisory role in suggesting that Ocean City look at its local ordinances to give police a new tool to deal with disruptive teens. He and his staff attended local meetings about the issue, working alongside Ocean City Police Chief Jay Prettyman and members of city council.

Sutherland said that modernizing breach of peace ordinances is not an attempt to circumvent the state's juvenile justice reforms, nor is it some sort of "police state" measure. The move is focused on crowd control in the age of social media, using precedents established by prior court cases to address a different set of problems than those the state reforms were broadly intended to counteract.

"If an ordinance is designed to address breach of peace and have that language in it, an officer has always had the ability to make an arrest under an ordinance," Sutherland said. "This is just basically a town updating some of its (ordinances) to be reflective of that to control crowds."

Part of the motivation is public safety, particularly in the wake of last summer's unsanctioned H2oi car rally in Wildwood, where two people were killed during the chaotic pop-up event. In Ocean City, large juvenile gatherings can put young people at risk of violence or drowning, Sutherland said. Treating unruly teen behavior under the city's breach of peace ordinance gives police more latitude to disperse people from scenarios deemed to be at high-risk of escalating.

"Most of the time, if kids see an officer having to arrest or remove somebody, they're going to change their demeanor because they don't want to be in that position," Sutherland said. "It's a way of doing it without trying to charge somebody with a crime ... it's really just a way for police to de-escalate a situation and remove somebody."

In some cases, an officer may decide to let minors go after they are removed from a situation, instead of bringing them to the station. If that happens, the outcome would not differ substantially from a curbside warning. Ocean City police simply will have greater discretion to handle these cases as needed.

Sutherland added that the intent of the Ocean City ordinance to control groups of teens shouldn't be conflated with how police officers handle cases involving individual adults.

In Wildwood, for example, the city notoriously reached a $325,000 settlement with a Philadelphia woman who resisted arrest on suspicion of underage drinking in 2018. The woman, who was 20 at the time, was thrown to the ground on the beach after a verbal altercation with a seasonal officer who pursued her when she defied orders.

"That's not really something that an ordinance like this would be designed for," Sutherland said.

Given the way that high-profile incident unfolded in Wildwood, it's not unreasonable to point out that both young people and police can panic or react unpredictably during arrests. The state's reform measures favored curbside warnings, in part, to make youth encounters with police less threatening.

Prettyman, the police chief in Ocean City, told OCNJ Daily that the breach of peace ordinance amendments do not pertain to underage drinking or marijuana consumption, since those are already covered by state law. A group of lawmakers in Atlantic County have proposed legislation to update how those issues are dealt with, advocating temporary detainments for juveniles that would allow their parents to be contacted and charges to be avoided.

For the state as a whole, the push toward rehabilitation instead of youth detention has been a success in many ways.

Since New Jersey began its Juvenile Detention Alternatives Initiative in 2003, the total number of juveniles in detention per year has dropped by 80%, from about 12,000 to less than 2,500, with youth of color accounting for almost 90% of the decline, the attorney general's office said.

But the state's standard of curbside warnings has left some shore towns in a unique bind relative to other parts of New Jersey that aren't recreational destinations in the same way.

Police departments in some shore communities have found the state's emphasis on curbside warnings to be inadequate since juveniles don't seem to fear any repercussions. The state's reforms don't even require kids to give their names to police officers.

Since the authority of police has been limited in these situations, communities have sometimes opted to take blanket actions that impact everyone.

In July 2021, for example, Avalon Mayor Martin Pagliughi decided to shut down the town's boardwalk and beaches overnight due to public property damage and excessive littering from large groups of young people. Pagliughi argued that the problem of rowdy teens is just as much a parenting problem as it is a matter of law enforcement policy.

"This unfortunate measure is a direct result of Gov. (Phil) Murphy's destruction of effective enforcement of laws pertaining to juveniles, and the elimination of certain police powers," Pagliughi said at the time. "Accountability and education begins at home, and some parents need to take an active approach in managing the activities and whereabouts of their juveniles. If they refuse, more drastic measures will be considered that would impact everyone as a result of actions of a few inconsiderate people."

A Murphy spokesperson said the governor is receptive to strategies like the one adopted by Ocean City.

"Just as the governor has worked with his administrative and legislative partners, our office will continue to work with the local mayors and law enforcement officials of our shore towns to find fair solutions for these disruptions," the spokesperson said.

The attorney general's office declined to comment specifically on Ocean City's ordinance amendments and how they align with the state's reforms.

Sutherland said it goes beyond his authority to call for similar policies to be adopted in other Cape May County communities, but he's supportive of Ocean City's initiative to make the town safer and more peaceful.

The upcoming shore season will be a test of how Ocean City police respond to juvenile crowds when given more leeway to break them apart, including by removing people who don't comply.

"It may not be used much," Sutherland said. "It may be used a few times. It may be used a lot in one night if there happens to be a large crowd and police needed a way to dissipate it."