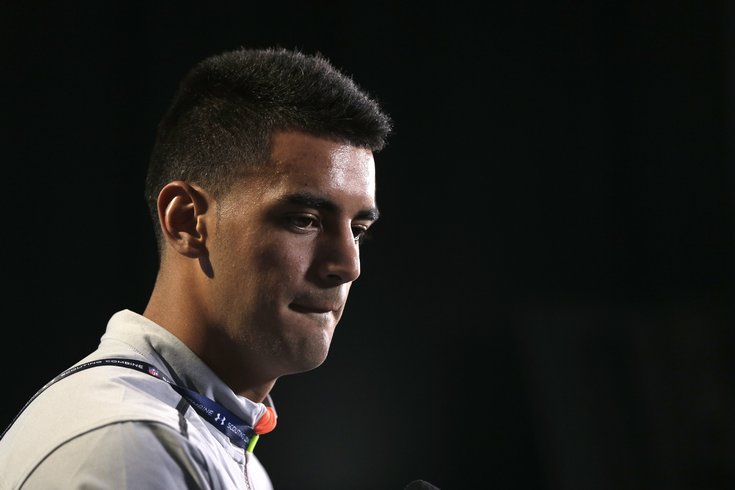 Oregon quarterback Marcus Mariota answers a question during a news conference Thursday at the NFL Combine in Indianapolis.

Read More
INDIANAPOLIS — The numbers do not bode well for all the wannabe NFL quarterbacks at the combine this week.

Of the 62 QBs picked in the NFL draft this decade, 15 are out of the league and another 24 have spent most of their time on the bench or the practice squad. That's 63 percent of the total.

Among the rest, sure, there is Russell Wilson, who has a Super Bowl ring and was one ill-timed play call from winning another. And Andrew Luck, who's showing signs that he'll win one someday.

But the other 21, including Andy Dalton and Colin Kaepernick, have started some — or many — games, and are still trying to prove they're either worth the money or the draft pick spent on them.

"The quarterbacks we have coming into the game today are a lot better than 10, 20 years ago," Gil Brandt said. "But the game is also considerably harder to learn."

So, the message for Jameis Winston, Marcus Mariota and the 13 other quarterbacks working out for coaches, scouts and GMs this week is simple: There are plenty of opportunities, but the odds are against you.

"I think it's harder and harder to play the position and develop the position because of the timetable and the fact we're not very patient as a society or a league," said Rich Gannon, the MVP quarterback who spent nearly two decades in the league. "Teams draft a kid and expect him to become successful right away. And just because Dan Marino or Peyton Manning didn't take very long to get it figured out, we think they're all going to be that way."

One story line whenever the combine rolls around is that quarterbacks are better suited to make the quick switch from college to the pros because passing offenses have proliferated around the country over the past decade. High school and college teams line up in spread-out, pistol and shotgun formations and, from the time they're teenagers, quarterbacks are used to receiving the ball, making a quick scan across the field and throwing.

But as everyone from Tim Tebow to Teddy Bridgewater have shown, the art of playing quarterback changes drastically once they reach the NFL.

Defenses adjust more quickly, the athletes are better and the option of tucking the ball in and running isn't as available in the NFL.

"The quarterbacks we have coming into the game today are a lot better than 10, 20 years ago," said Gil Brandt, the longtime director of personnel for the Cowboys. "But the game is also considerably harder to learn. Not so much from an offense standpoint, but from a defense standpoint. People do so many different things, coverage-wise, now. In the old days, it was the grade-school version of defense. Now, you better be a grad student from MIT."

The top three quarterbacks chosen in the last two drafts have served up proof of how difficult this transition is.

• Blake Bortles won only three games with Jacksonville and finished with 11 TDs and 17 interceptions.

• Johnny Manziel's flame-out in his first start with Cleveland and his eventual landing in a rehab facility this offseason stood as the starkest example of how rough the transition can be, both on and off the field.

• Bridgewater helped the struggling Vikings win a few games but management had to tread carefully, realizing he wasn't ready to step right in and take over.

"A lot of factors went into it, with how the rest of the team, how the offensive line was playing, how the receivers were," said Vikings coach Mike Zimmer, who made Bridgewater the starter four games into the season. "There's so many variables that come into it. And then the quarterback himself. What kind of person he is? How quick does he handle things?"

• E.J. Manuel got benched in Buffalo in favor of Kyle Orton. The Bills are currently shopping the free agent market.

• Geno Smith took a back seat to Michael Vick for a time with the Jets. His window is, by many accounts, on the verge of closing.

• Mike Glennon, who was pulled from Tampa Bay's starting lineup last year. Bucs coach Lovie Smith insists Glennon could be the quarterback of the future, all the while looking hard at Winston and Mariota when deciding how Tampa should use this year's first pick.

"I think it helps a little bit if you've done more of the things in college that you'll be doing in an NFL game," Smith said, when asked if Winston's experience in a pro-style offense at Florida State could help him. "But a lot of this is about projections."

Luck, much like Manning 17 years ago, is one of those once-in-a-generation talents who lived up to the projections, making the transition without too many growing pains. He threw for 4,300 yards and took the Colts to the playoffs in his 2012 rookie season and has gotten better from there.

But two teams' front offices will take chances on these players. And in a league built on quarterbacks, their jobs will hinge on the decision and what they do after they sign the quarterbacks.

"What's pretty consistent is that teams that are firing coaches are also the ones looking for quarterbacks," Gannon said. "You look at the New York Jets, Buffalo, some other places. You see that they fire coaches when they can't get the quarterbacks to play well."