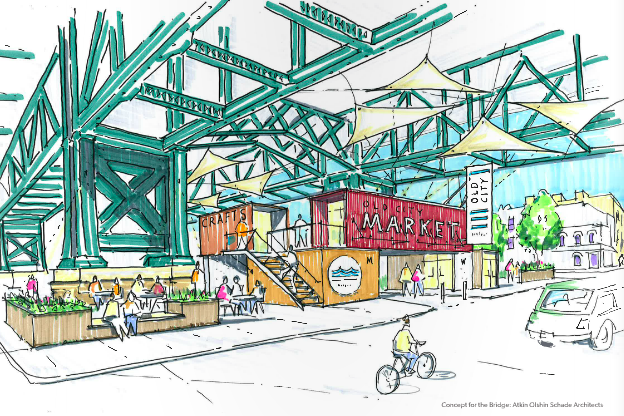 Among all of Philadelphia's neighborhoods, Old City arguably possesses the most representative combination of what defines urban life. Historical sights, riverfront attractions, a bustling commercial presence, and tourist amenities all make Old City a unique marker of Philadelphia's past, present and future.

Looking ahead at the next decade, the Old City District, a public-private partnership geared toward improving the neighborhood's quality of life, conducted a series of resident surveys and studies to map out several development goals that can advance area's appeal in the future. Joined by the RBA Group, OCD, Urban Partners, and Atkin Olshin Schade Architects, the group published its Vision 2026 report to outline those goals and provide a summary of feedback gleaned from residents.

While several themes figure prominently in the report, the overarching objective presented in the plan is to make Old City more of a walking district, particularly on Market Street between Penn's Landing and 4th Street, by adding additional green open spaces and cultivating vacant properties to enhance local business activity.

The report identifies Christ Church Park – located at the corner of Market, 2nd and Church streets – as the existing green space most in need of a renovation. With a goal to turn it into more of a commons, the report proposes new entrances, walking paths, seating, and other placemaking efforts, such as new trees and planting.

For greater walkability, the report examines the possibility of a 2nd Street Station Plaza that would create a shared street for pedestrians and motorists. As detailed by Plan Philly, the concept is popular in European cities and transforms roadways into curbless streets that better equalize the flow of traffic among pedestrians, bikers and drivers. 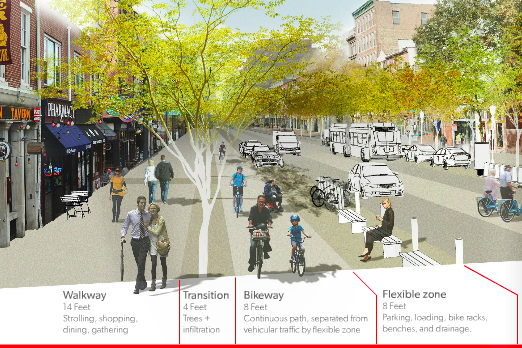 Vision for shared roadway at 2nd and Market streets.

One of the more ambitious goals presented in the report is the idea of introducing commercial development beneath the Benjamin Franklin Bridge.

"Underutilized space below the bridge offers the opportunity to create a new and unique destination for commerce and social events, as well as reframing and redefining an iconic portal to Old City, in a way that transforms a barrier between parts of the neighborhood into a hub of the community," the report reads.

Since the area beneath the bridge is controlled by the Delaware River Port Authority, Old City District hopes to collaborate with them to explore the viability of future development there. Plans to do so would be bolstered, the report says, by establishing a direct highway link between the Vine Street Expressway and the Benjamin Franklin Bridge.

Overall, residents, workers, business owners, and visitors in Old City said that history is their favorite aspect of the neighborhood, followed by dining and a mix of shopping, arts and culture and architecture. Those surveyed said that if Old City should emulate any other neighborhood in Philadelphia, it's Rittenhouse (27 percent), East Passyunk (13 percent), Society Hill (13 percent), and Northern Liberties (10 percent).

You can read the full Vision 2026 report here.