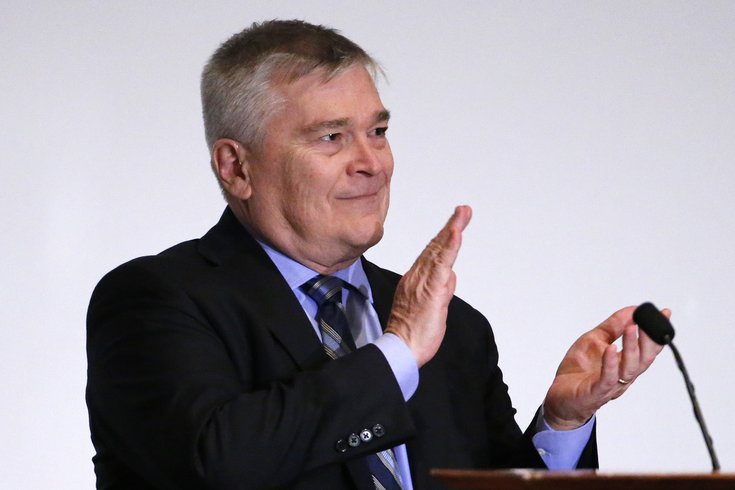 Eric Barron told The Associated Press that the report by former FBI Director Louis Freeh took a prosecutorial approach and created an "absurd" and "unwarranted" picture of students, faculty and others associated with the university.

"I have to say, I'm not a fan of the report," Barron said during a half-hour interview in his office in Old Main, the school's administrative headquarters. "There's no doubt in my mind, Freeh steered everything as if he were a prosecutor trying to convince a court to take the case."

The Freeh report concluded that former administrators Graham Spanier, Tim Curley and Gary Schultz, and former football coach Joe Paterno intentionally concealed key facts about Sandusky's child sex abuse to avoid bad publicity after receiving complaints in 1998 and 2001. It also recommended more than 100 changes to school policies and procedures and said Penn State was permeated by a culture of reverence for the football program.

The Freeh team's report, he said, "very clearly paints a picture about every student, every faculty member, every staff member and every alum. And it's absurd. It's unwarranted. So from my viewpoint, the Freeh report is not useful to make decisions."

"There's no doubt in my mind what was completely and totally wrong was the notion that this entire alumni base, our students, our faculty, our staff, got the blame for what occurred," Eric Barron said.

Weeks after the Freeh report was issued in 2012, Penn State and the NCAA entered into a consent decree that imposed a four-year ban on postseason play, temporarily cut scholarships, required a $60 million fine and invalidated 112 football team wins from Paterno's later years. Although the legality of that deal has been questioned, Barron said he has no doubt that his predecessor, Rodney Erickson, had the authority to do it.

The NCAA last year restored the bowl rights and scholarships, and agreed two weeks ago to restore the wins.

"I think it adds more clarity and it reflects circumstances better," Barron said. The recent decision amounted to "removal of penalties that, in my mind, don't quite match NCAA obligations, and so I think the consent decree dissolution is a very positive thing for the university."

Despite Barron's criticisms of the NCAA's process, his office stressed that the school was still committed to procedural changes and its commitment to funding child abuse prevention efforts.

He said the NCAA's main role should be making sure teams don't get an unwarranted advantage on the playing field, and he argued any Sandusky cover-up did not result in the type of advantage teams get from illegal recruiting. The matter should have gone through the NCAA's infractions committee, he said.

"I think it's increasingly clear that none of the things that transpired had any impact on the field," Barron said. "And therefore I think almost universally, people say, well, those teams win those games. I think it's equally clear that in almost every instance we pay a penalty if we don't follow a process. And the NCAA stepped out of their process."

Barron said he has not finished a formal review of the Freeh report that he is conducting for university trustees.

Sandusky, a retired assistant coach, was accused of sexually abusing boys, some of them on campus. He is serving 30 to 60 years in prison after being convicted of 45 counts of child sexual abuse, though he has consistently maintained his innocence.

The case of Spanier, Schultz and Curley for an alleged criminal cover-up is pending before a county judge in Harrisburg, 90 miles from the Penn State campus. Barron said that proceeding may bring to light new facts.

"Unfortunately, there are a lot of shoes that have to drop. You could argue that public opinion has found us guilty before the criminal trials," Barron said. "There's no doubt in my mind what was completely and totally wrong was the notion that this entire alumni base, our students, our faculty, our staff, got the blame for what occurred."

Student applications to Penn State have continued to rise, external funding of research is strong and donations have poured in, but the impact of the Sandusky scandal remains acute, Barron said.

Barron said conflict among the trustees that pits those elected by alumni against the others comes down to different ideas about "a path forward."

"Of course I'm concerned about antagonism," he said. "And I'm concerned particularly because if you go to the foundations of all those individuals, they all love Penn State, they're all giving an enormous amount of time to Penn State, and for no other reason than they believe in the institution."

Penn State is developing a proposal to the Big Ten Conference to revise an athletics integrity agreement that currently applies to the university. Barron said a discussion about returning Penn State's share of the conference's bowl revenues from recent years "will be a face-to-face discussion."