The Democrat, currently in his second term, said his wife Frances Wolf wouldn't take kindly to the idea 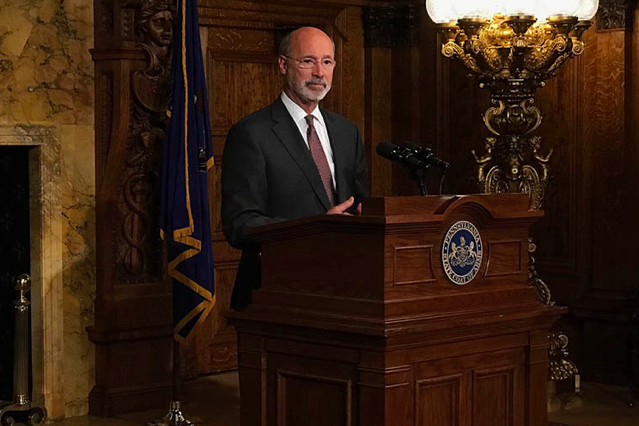 Pennsylvania Gov. Tom Wolf during a radio appearance Wednesday morning said he isn't interested in joining the 2020 Democratic presidential ticket as the candidate for vice president.

Wolf, currently in his second four-year term as governor, appeared on WITF's "Smart Talk" segment Wednesday, during the show's trip to the governor's residence in Harrisburg.

Here's how the exact exchange, which happened during the portion of the interview featuring Pennsylvania first lady Frances Wolf, went down:

WITF: "We saw several social media posts, where I saw mention of you as a possible candidate, as a running mate, for one of the Democratic candidates for President."

Frances Wolf: "The answer is no."

TW: "In June, we will have been married 45 years. If I were to come home and say, 'Let's start thinking about this,' I wouldn't make it to my 45th wedding anniversary."

WITF: "So that is an absolute no?"

WITF: "That is an absolute no, Tom Wolf will be not running mate for vice president."

TW: "I seriously doubt anybody's going to ask, but yeah, no."

Wolf is currently enjoying the highest approval rating of his time as governor, according to a Quinnipiac University poll from earlier this year. Wolf's support in Pennsylvania measured at 54%, and two-in-three respondents were at least somewhat satisfied with Pennsylvania's current direction.

Interestingly, Pennsylvania's governor's job could be a point of intrigue in the 2022 midterm elections, particularly to Philadelphia voters. The Philadelphia Inquirer reported last month that Mayor Jim Kenney, fresh off a successful re-election campaign, is eyeing a run for governor.