For an absurd campaign, an appropriately absurd satirist 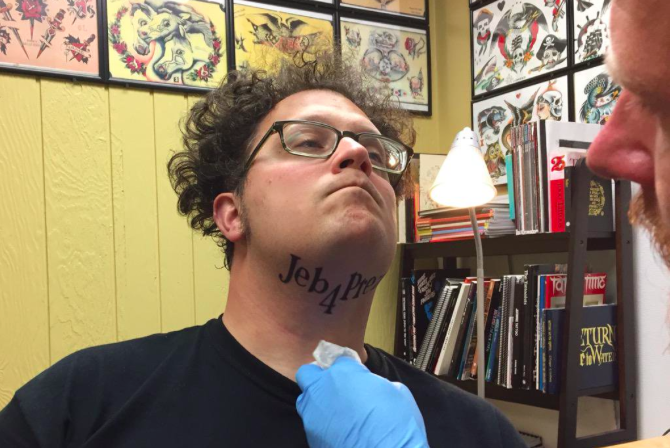 How do you satirize an election that's become a parody of itself? How can a comedic institution like "Saturday Night Live" acutely point out the absurdities of a campaign where the line between absurd and reality has evaporated?

Alec Baldwin may have nailed Donald Trump's bombastic and unpredictable nature in the "SNL" season opener, but if you turned on NBC late that Saturday night with the live audience laughter muted, would you have been able to tell it was a joke?

Enter Vic Berger, the Lehigh Valley man who, through intentionally not-so-slick editing, has been churning out re-cut videos of the 2016 debates, stump speeches and campaign events to millions of viewers on YouTube. Berger doesn't use impressions, and he doesn't give a monologue like the late-night talk show hosts.

Instead, Berger chops up tape of those debates and speeches to create an alternative universe of random interruptions, too-close close-ups, misplaced sound effects and awkward silences. There's a good chance you've seen one of Berger's videos shared on Facebook, but for reference, here's a compilation of clips Berger made with one of his favorite targets, also-ran Jeb Bush.

Berger's videos, which are published on the YouTube channel Super Deluxe, don't only address politics — his work showing Steve Harvey sinking into an existential crisis while hosting "Family Feud" has more than 8 million views on Facebook. He also gained local media attention in 2014 with his viral "music video" featuring the bizarre hold music played on the E-ZPass customer service line.

But it's his election videos that have brought him national attention, including features in The New Yorker, Wired and Vice. Much of the buzz came after he and frequent collaborator Tim Heidecker of "Tim & Eric" fame (Heidecker is also a Lehigh Valley native and a Temple University graduate) pulled an elaborate prank on Bush's campaign with a viral Vine video and a fake tattoo. (For that full story, click here).

I'd like to make Vic get a #Jeb4Prez tattoo. He's halfway to 1mil, give this Vine a few views... https://t.co/iIGFSDB4Pm

ATTENTION! @JebBush!
The Vine hit 1mil, so I had to do what we agreed on. Last night, I got a #Jeb4Prez neck tattoo. pic.twitter.com/5i3HzWQ7jF

In a Q&A with PhillyVoice, Berger discussed the election, his editing style and more.

You're from Bethlehem, a stone's throw away from Allentown, where your frequent collaborator Tim Heidecker grew up. How did you guys get to know each other and when did you guys start working together?

I had been a huge fan of Tim's work for years; about three years ago, I was really into his show with Gregg Turkington called 'On Cinema.' It's like a Siskel & Ebert show on movies, but movies are far from what happens on the show. There's always these personal issues with Tim that take center stage. It's a genius show. I had been sending Tim these songs that I would write and record after they released an episode and they would essentially be a fan's reaction to what happened. And I would have a little video that went along with it, even though I hardly knew what I was doing in that department. Which is why it surprised me when he asked me to edit a segment for the 'On Cinema Oscar Special.' He thought I was a video editor. I didn't tell him I wasn't, so I said yes and then bought a laptop and recording software and learned how to use it quickly. Thankfully, they liked my work and it was successful. I have Tim to thank for making me into a video editor!

When did you start delving into political satire? Did it start with your Jeb Bush prank and just snowball from there?

It was a natural progression because for what I tend to do, I need footage. I work mainly with things I find on YouTube or record off of the TV. I had been making goofy videos using footage of Guy Fieri, Steven Seagal and, especially, Philadelphia's own Chubby Checker. The candidates started announcing that they were running and, because it's on people's minds and because there is endless amounts of material available, I started working with it. Jeb Bush's YouTube channel gave me so much material. His handlers really wanted him to look relatable to the public, so there were loads of videos of him doing relatable things like listing off Apple products he likes and even him putting on a hoodie. (Which was clearly the first time he did it, because he put the thing on over his head despite it having a zipper.)

Yeah, the Jeb prank snowballed thanks to Jeb, actually. It was a Friday night around midnight and I tweeted some dumb thing like if this Jeb Bush Vine hits 1 million views, I'll get Jeb 4 Prez tattooed on my neck. And in an effort to be relatable to millennials with neck tattoos, Jeb's people tweeted it out and encouraged people to watch this and said, 'I want to make Vic get a neck tattoo.' Very stupid! One thing that candidates should never do is interact with people online. I really think it's a bad idea. You don't know who these people are and things like this happen!

Your videos don't seem to be taking partisan political stances; instead, they appear to point out the general absurdities of the campaign and the candidates. Are you trying to make a point with any of your videos, or are you just making fun of the whole thing?

In general, I don't take sides with my videos, though I do point out a lot of the hypocrisy and things that are outright lies. And I have to say, most of my material comes from [Donald] Trump's campaign. I made videos that are comedy, yet I'm working with political footage. If the politics outweighs the comedy, then it's not all that fun. But also my work is a reflection of what is going on in the world, and I can use editing to comment on that. If you look back about six months ago, my stuff was a bit more lighthearted compared to my more recent work. I think my newer videos reflect the constant negativity and personal insults that Trump has been putting out there since he announced he was running. We are tired of this election, and I think almost anyone can agree, even his supporters, that we are tired of the negativity.

Many people get mad at me for not editing Hillary as much, but I have to go where the funny is. And Hillary just isn't great material in comparison to Trump, who gives me way too much to work with. It's overwhelming, to be honest. I don't have enough time in my life to edit everything he gives me!

One of my more pointed videos was when Trump went on Jimmy Fallon a few weeks back. This is after months and months of Trump saying racist things and insulting women and trying to ban people of a certain religion and so on. The video wasn't really focused on Trump; it was more on why it was wrong in my eyes that Fallon would allow this person onto his show and help to normalize his behavior.

Besides Trump and Bush, which candidate has given you the best material for your videos?

Trump and Jeb are the big ones. I miss Jeb terribly. Lincoln Chafee would have been a gold mine had he stayed in longer. Chris Christie is fun to work with because he's clearly this corrupt bully who yells at everyone and of course he's backing Trump. He's given me some great videos and Vines. But I'd have to say Ted Cruz would win third prize were ... [I] to give out an award for best material. I spent a long time editing this 10-minute mix of my favorite Ted Cruz videos, and it's this horrible nightmare that is just so dark and creepy. And the day I finished it, I went to see Ted Cruz at the Hamilton Family Restaurant in Allentown. My buddy, who is also an editor named Todd Dracula, and I went there and got photos with him. We were just curious to see what he was like. He was very weird, as expected, but it's extra weird to edit these people the way I do and then see them in person.

Your editing style is, to say the least, unique. How did you come up with it?

Well, I've only been editing for about three years, so a lot of it comes with trial and error and figuring out what makes me laugh. I'm not trained, so I've basically been learning as I go.

Sometimes, you're editing down a two-hour debate into a three-minute video. How long does it typically take to finish one?

The debates are a ton of work. For the first debate with Trump and Hillary, Super Deluxe asked me to pull an all-nighter to have it out the next day. Including watching the live debate and figuring out what I was going to do with it, it took about 16 hours. That's a little more rushed than I would like, but it's sometimes good to get stuff out really quickly, as long as the quality doesn't suffer. Usually, I spend a bit longer. Maybe 20-24 hours or more. It all really depends on the material. Sometimes it's hard to know where the video is going, which slows it up, but sometimes I get on a roll and can hammer it out quicker.

When the election is over, do you plan on doing more political satire videos or move on to more of your pop culture stuff, like those Steve Harvey-in-a-tailspin videos?

I love the Steve Harvey stuff and especially my Jim Bakker videos. There's so much material out there that needs to be worked with. I'm sure I will be working with political stuff, but you can expect way more Steve Harvey-esque videos and possibly more pop culture kind of stuff.

What's weirder, this election or the videos you've made about it?

It's a close call. Trump has been saying and doing some truly crazy things that sometimes I feel like I'm on another planet and can't believe he is a real person who is this close to being in the White House. But I would say since my videos are a reflection of what is happening in reality, and I'm only amplifying what these people are doing, I'd say the actual election is weirder. There are many, many times when I feel like I don't even need to edit things. They do most of the work for me.