Wolf pushes for some Pennsylvania households to get $2,000 checks 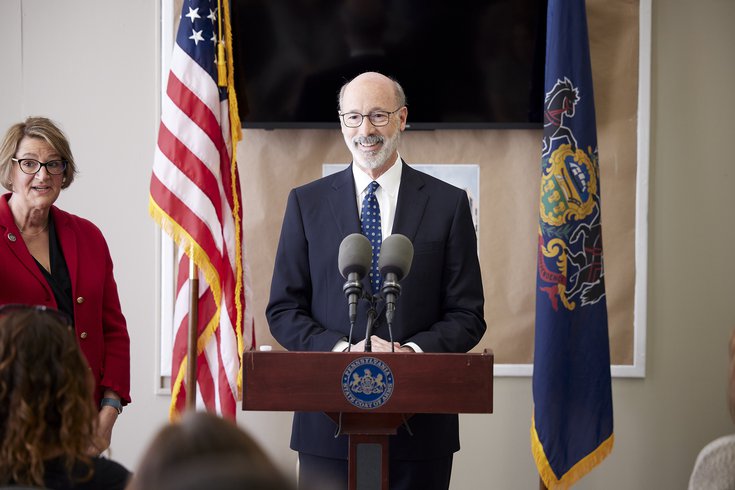 Pennsylvania Gov. Tom Wolf speaks at the Pocono Family YMCA to promote his proposed PA Opportunity Program, which would send $2,000 checks to Pennsylvanians.

Pennsylvania Gov. Tom Wolf renewed his call Thursday to give up to $2,000 to households that earn $80,000 or less by tapping into unspent funds from the federal American Rescue Plan Act.

Wolf originally unveiled his proposal in February, calling on the General Assembly to take action with $1.7 billion in surplus federal funds that will need to be returned to the federal government by the end of 2024 if a plan is not approved to spend the money.

Wolf also wants to use the money to provide small business grants and property tax relief, and to fund health care and conservation programs.

The $1.9 trillion American Rescue Plan Act, passed in March 2021, included $195.3 billion for states known as the Coronavirus State Fiscal Recovery Funds. Pennsylvania received $7.29 billion and allocated about $4.6 billion for fiscal year 2021-22, leaving more than $2 billion left in the state's general fund for the next fiscal year.

"Pennsylvanians should not have to choose between paying for utilities or groceries, child care or gas. We have the opportunity and the means to ensure they're not struggling, to ensure their success," Wolf said. "I'm asking the General Assembly to unite across aisles on this for the sake of every Pennsylvanian – for when they succeed, our commonwealth succeeds. Let's get this money out of our coffers and into the pockets of Pennsylvanians."

Wolf's $1.7 billion proposal would commit $500 million to the PA Opportunity Program, which would make direct cash payments to households similar to the federal coronavirus stimulus checks that went out in three rounds during the first two years of the pandemic.

"For people who faced the most severe economic hardships during the COVID-19 pandemic, the governor's PA Opportunity Program would provide such a boost," said state Rep. Maureen Madden, D-Monroe. "Even as the economy recovers in record fashion and unemployment numbers continue to drop, we're still facing worldwide inflation, and the higher cost of living is impeding the recovery of working-class families who are the lifeblood of our communities."

Wolf and other Democratic lawmakers have urged Republicans in the state legislature to work with them to reach a deal that puts the ARPA money to use.

In March, Republican Sen. Pat Browne, of Allentown, told The Morning Call that he believes there is room for a compromise to be reached on the use of some federal funds.

"We may not be able to accommodate all the things he is proposing," said Browne, who chairs the Senate Appropriations Committee.

Pennsylvania's choices about ARPA funds come in the context of a looming gubernatorial election in 2022. That makes the surplus $2.2 billion an appealing resource for an incoming administration if Wolf is unable to get Republicans to back a plan to allocate the money this year.

Some Republican lawmakers say keeping the ARPA funds in reserve is necessary to ensure the state budget remains balanced over the next two and a half years. The money would be gone after that point, however, and the concrete benefits it could provide the state in the interim would not be realized.

Wolf has argued that the state's general fund balance of $8.8 billion, which includes about $2.2 billion in ARPA money, is at a safe level for lawmakers to make use of the funds.

In addition to direct cash payments, Wolf's $1.7 billion plan would include $225 million in support for small businesses. Grants ranging from $5,000 to $50,000 would be available to help businesses impacted by the pandemic cover operating expenses and access technical assistance.

About $204 million would go to relief for low-income renters and home owners, including an expanded Property Tax Rent Rebate that would provide an average of $475 to an estimated 466,000 Pennsylvania residents.

Finally, $450 million would be dedicated to conservation programs that support agriculture, recreation, community revitalization and initiatives that prepare the state for extreme weather events and the long-term impacts of climate change.

Pennsylvania is far from the only state that has moved cautiously in spending its ARPA funds. A number of states have yet to allocate any of the federal funds, and the weight the money has varies from state to state based on how much of the annual state budget it represents.