The group was targeting experiments on canines tied to the university 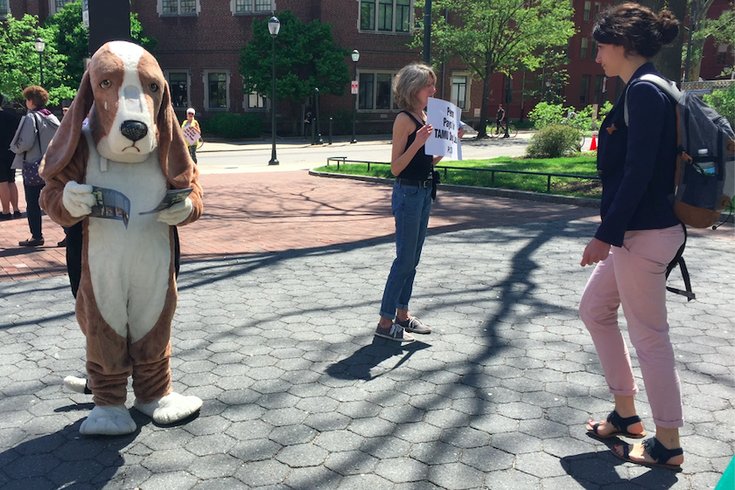 A PETA supporter in a dog costume distributes flyers urging passersby to question why a University of Pennsylvania researcher helps fund experiments on canines.

The 50-some people who marched through the University of Pennsylvania campus on a mission to “Save the Penn Book Center” might have been the loudest protesters in that area around lunchtime Tuesday.

But they were not alone in spending a beautiful day to spread their message near 34th and Walnut streets.

A group of nearly a dozen PETA supporters commemorated “World Week for Animals in Laboratories” by distributing flyers, holding signs urging the university to stop animal testing in its labs, and asking passersby to “Please stand up for dogs.”

Among them was one supporter dressed like a dog for visual impact, and local animal-rights activist Marianne Bessey, who once led the charge to have elephants removed from the Philadelphia Zoo.

Bessey, a Penn alum, said the focus of the protest was a lone researcher at the university who helps provide funding for muscular dystrophy experiments on dogs at Texas A&M University. (Video of the experiments performed on golden retrievers it claims are bred "to develop canine muscular dystrophy” is difficult to watch.)

They'd like to stop all animal experiments at Penn, but today’s focus was this “egregious experiment,” she said. 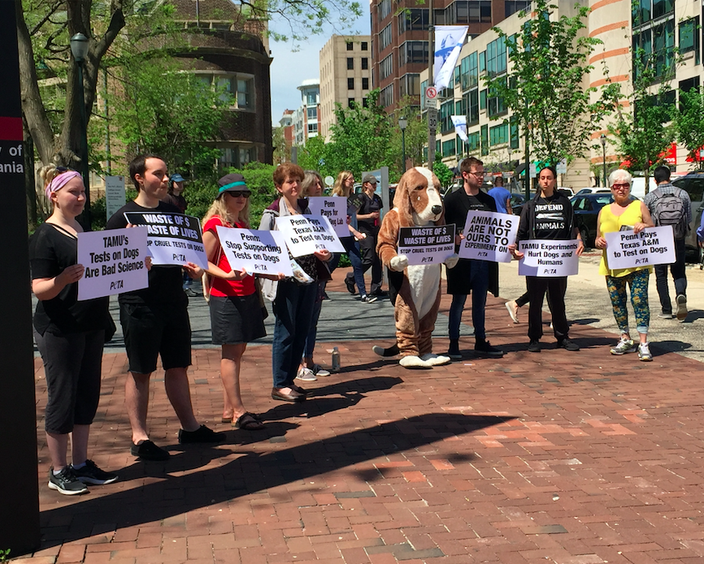 A group of PETA supporters commemorated 'World Week for Animals in Laboratories' with an hour-long protest at 34th and Walnut streets on Tuesday, April 23, 2019.

While a request from the university for comment went unreturned, Bessey claimed that Hansell H. Stedman at the Perelman School of Medicine provides part of a federal grant that he receives from the National Institutes of Health to researchers at Texas A&M.

“It’s a cruel and unnecessary experiment that’s been going on for 37 years,” she said. “No cure, no treatment has emerged from it. If this was a business, it’d have been shut down in no time. And, our taxes are funding it.

“I’m fired up about it. We’re asking them today to stop this experiment," she added. "We were here last year, and we’ll keep coming back until they stop it.”

That sentiment was echoed by Dr. Emily Trunnell, a research associate quoted in an advisory about the protest as saying, “PETA is calling on Penn to pull its funding from these indefensible experiments immediately.”

The gathering was expected to be more “vibrant” than it was, but Bessey said there’s good reason why it was scaled back on Tuesday.

“We were going to bring dogs out with us today, but it was too hot for that,” she said.

Add Brian's RSS feed to your feed reader
Have a news tip? Let us know.