'Philadelphia Museum of Art workers finally reached a fair deal that treats them with the respect and dignity they deserve,' said AFSCME President Lee Saunders

By Brian A. Saunders
PhillyVoice Staff
Business unions
from 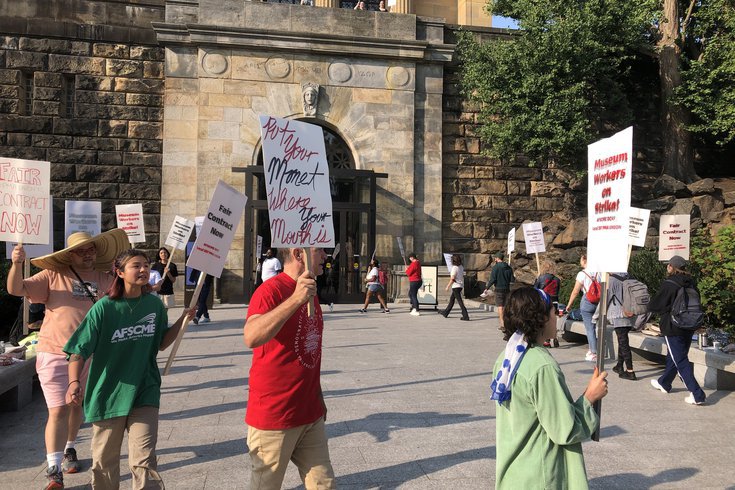 Philadelphia Museum of Art workers agreed to a tentative deal to end a 19-day strike on Friday. The workers picketed for better treatment and fair wages.

After years of unsuccessful attempts to negotiate new contracts, a summer of rallies, and a 19-day unionized strike, Philadelphia Museum of Art workers have agreed to a tentative deal on a more just three-year contract with their employer.

Union members of the AFSCME DC47, Local 397, and PMA Union will vote on a new contract on Sunday.

"After more than two years fighting for a fair contract and nearly three weeks on strike, Philadelphia Museum of Art workers have finally reached a fair deal that treats them with the respect and dignity they deserve. Sticking together in the face of union busters, scabs, and stonewalling from management, PMA workers showed us all how it's done," said AFSCME President Lee Saunders.

19th day of our historic strike: @PMA_Union has reached a tentative agreement with @philamuseum management!! There were 5 issues going into the strike. We got all 5. Management claimed they wouldn’t move. They did. Say it with us: UNITED WE FIGHT UNITED WE WIN pic.twitter.com/yKvCXykZBJ

The Inquirer reports that the agreed-upon contract includes salary increases of 14% over the next three years and a $1.75 increase in the minimum wage to $16.75 an hour.

For every five years of service as a worker, PMA employees will now receive a $500 bonus for longevity.

"This victory today is an example of what happens when workers come together in a union to demand better wages, fair treatment, and respect on the job," Saunders said. "This is why cultural workers at museums, libraries, and zoos across the country have started a wave of worker organizing that's taking hold of the industry. We're proud that they're part of the AFSCME family."

It's gonna take me a long time to process the three hard weeks of our strike (and what it means for my relationship to the museum and the field), but right now my main feeling is of deep pride and gratitude for my @PMA_Union colleagues and the many, many people who supported us. https://t.co/sx0LAjAbZ2

Employees in the union alleged that the Museum management did not take negotiations seriously and failed to do anything about unfair labor practices since the union formed in 2020, which led to an initial one-day strike on Friday, Sept. 16. After attempts to negotiate better pay and affordable healthcare plans and better benefits such as the agreed upon paid parental leave, PMA workers were at a standstill.

Local union president Adam Rizzo said that PMA management was resistant to making any changes, and once the charges were filed, negotiations were no longer productive, which forced workers' hands.

At the time, Rizzo said that once the museum realized that workers could shut the operation down, they would come back to the table to negotiate in good faith.

After the initial strike, things got more tense, and on Sept. 23, the PMA union announced it would begin striking indefinitely on Sept. 26.

"We had hoped the museum's appointment of a new director and CEO, Sasha Suda, would signal a change in tone and that she would be more involved in helping us reach a fair agreement," Rizzo said. Unfortunately, that hasn't happened. If the choice is between accepting the status quo or going on strike, we choose to strike. It's up to museum management to present a better option."

At least 180 union workers picketed daily as the PMA, which has a $60 million yearly budget, paid its workers wages 20% lower than workers in similar museums.

As the strike intensified, picketers shouted, "No contract, no peace, no contract, no Matisse," as the countdown to the opening of a Henri Matisse exhibit loomed.

That's no longer a worry, the next challenge is for PMA management to rebuild trust and the relationships with its employees.