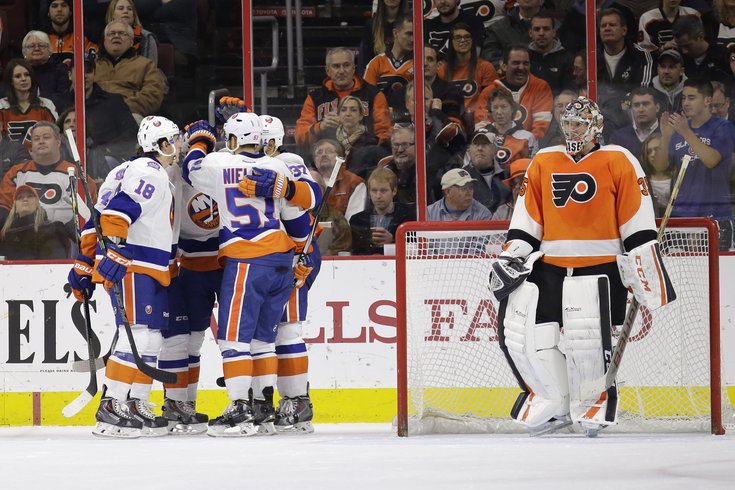 Flyers goalie Steve Mason looks on as the Islanders celebrate a goal.

Top of the division is nice. Winning the East sounds even better for the surprising New York Islanders.

Cal Clutterbuck scored the deciding goal in the seventh round of the shootout to lead the scuffling Islanders to a needed 3-2 win over the Philadelphia Flyers on Thursday night.

"There wasn't really a plan, just hit a hole," he said.

Clutterbuck hit the open one and the Islanders remained firmly in the hunt for the top spot in the Eastern Conference. Tampa Bay was the lone team to catch after a three-game losing streak kept the Metropolitan Division leading Islanders from gaining valuable ground in the standings

"It was a lot more the way we wanted to play than the last couple have been," Islanders captain John Tavares said.

Clutterbuck scored just his fifth goal of the season in regulation, and Mikhail Grabovski scored his eighth. Frans Nielsen got a puck past Steve Mason on the first shot of the shootout, and Wayne Simmonds scored on Philadelphia's last tying attempt in the third round.

"There are some other things I can do that can be beneficial to the boys," Clutterbuck said of his goal outburst.

After Clutterbuck's wrister got past Mason, Sean Couturier was denied by Jaroslav Halak on the tying attempt and Philadelphia's season-high four-game winning streak was over.

"We needed it and we got to keep it going now," Tavares said.

Mason had 28 saves. Nick Schultz and Chris VandeVelde scored in regulation on a scarcity of shots for the Flyers.

"I don't think we were happy with the overall effort in tonight's game, but my job's not to worry about what's going on, just make the save," Mason said. "I didn't make enough of them, obviously."

With NHL points leader Jake Voracek and fellow All-Star Claude Giroux unable to get on track, the Flyers struggled to generate any offense. They took just six shots in the first period and five more in the second.

But the Flyers did make the most of their limited opportunities, scoring twice on their first eight shots on Halak, who had 16 saves. Schultz put the Flyers up 1-0 on his second goal of the season. Both goals have come over the last three days — which makes his production almost like Sidney Crosby after he went 125 games without one before last week. He had not scored before Thursday since he played for Edmonton on April 28, 2013.

VandeVelde made it 2-0 in the second on a shot from the circle moments after coach Craig Berube used a timeout to spark the Flyers.

Philadelphia's momentum was short-lived. Grabovski scored an unassisted goal late in the period and Clutterbuck scored his first goal since Dec. 13 off a rebound to even the score at 2.

The Flyers did get some rare production from Vincent Lecavalier, who had two assists. The four-time All-Star, drafted No. 1 overall by the Lightning in 1998, has been a bust since the Flyers signed him in the summer of 2013. He was a healthy scratch for a spell this season and was demoted to the fourth line.

Philadelphia's dim playoff hopes could get a boost with the return of defenseman Kimmo Timonen. Timonen, who turns 40 in March, has sat out all season because of blood clots in his lower right leg and lungs and will skate Friday with the goal of returning to the lineup. He said he'll skate on his own for 7 to 10 days before a potential return to full practice with his teammates.

Timonen and general manager Ron Hextall both said during an in-game press conference they would not risk the veteran defenseman's health just so he could finish his career on his skates.

"I think the biggest thing for you to need to know is the bleeding factor," Timonen said. "I've seen a couple (of) articles that say, 'What happens if Kimmo gets cut on the ice?' There's no bleeding factor because on gamedays I can't be on blood thinners."

Timonen stood by his decision that he will retire after this season.