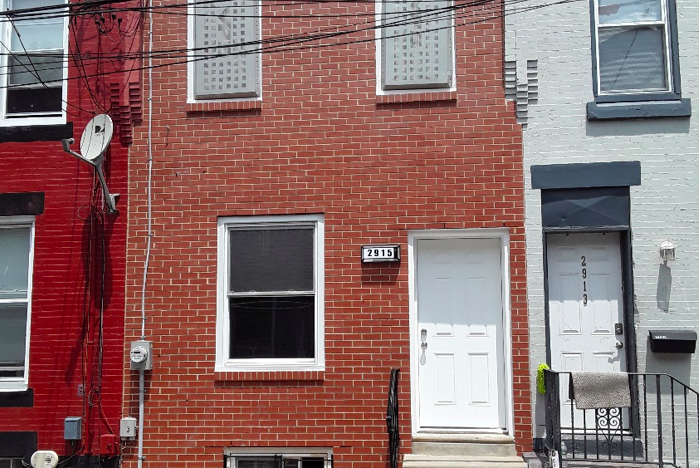 The Philadelphia Housing Authority welcomed former residents of the Sharswood homeless encampments into renovated homes in North Philadelphia on Tuesday. Above is one of the completed rehabilitation projects on Westmont Street.

The Philadelphia Housing Authority has begun to fulfill its agreement made in October 2020 with leaders of a homeless encampment that was located in the Sharswood neighborhood.

PHA welcomed the first families of their housing pilot program into their new homes on Tuesday, following renovations made to long-vacant homes in North Philadelphia that were transferred to the newly-formed Community Land Trust, according to a statement released by the agency.

The Community Land Trust was established by protest organizer Jennifer Bennetch following the closure of two homeless encampments in the city – "Camp Teddy" previously located along the Benjamin Franklin Parkway, and another located near PHA headquarters at 21st St. and Ridge Ave.

The formation was a direct response to those closures, and the PHA notes that its purpose is to provide community control of land and provide adequate and available affordable housing.

"As I always say, there is an affordable housing crisis in Philadelphia and throughout the country," said Kelvin Jeremiah, president and CEO of the PHA. "No entity can solve this vexing issue alone."

As part of its pilot program, nine homes on Westmont Street in North Philadelphia were rehabilitated, and PHA has announced plans for an additional 25 homes to be renovated by the PCLT in order to house more of the former encampment residents. The first two homes were renovated using free union labor, with costs for the remaining seven properties averaging about $150,000 per home.

One of the first residents to move into her new home is Jannie Mitchell, who said that after three years of homelessness, she is extremely thankful that she and her family "finally have a place to call home."

Tumar Alexander, managing director for the city of Philadelphia, said that the city looks forward to continuing to work with PHA and PCLT to support efforts to provide affordable housing.

"These new homes are a testament to the vision and dedication of our partners," said Alexander in a joint statement with the PHA. "Today we see...what that means for our city. It means the stability and security of affordable long-term housing, transformed properties and neighborhoods, and momentum for our local efforts to address the national housing crisis."

Following protests by then-residents of the homeless encampments throughout the spring and summer of 2020, the city agreed to provide 50 homes to the community land trust. The agreement was officially made in October 2020, effectively closing the encampments.

In an initiative to address the affordable housing crisis in Philadelphia, PHA made plans to develop 240 properties in the city for affordable housing, many of which are in communities in Fishtown, East Kensington, and Northern Liberties.

Other than the direct transfer of affordable housing to former residents of the encampments, PHA began the process of transitioning homeless Philadelphians by assisting in their engagement with the agency's Workforce Development program, which provided optional workforce services.

According to the statement, each participant also worked one-on-one with a social worker and, in collaboration with Project HOME, 20 participants took advantage of individual supports offered. The non-profit also provided supplementary housing services.