The site along the Schuylkill River will become a logistics, e-commerce and life sciences hub 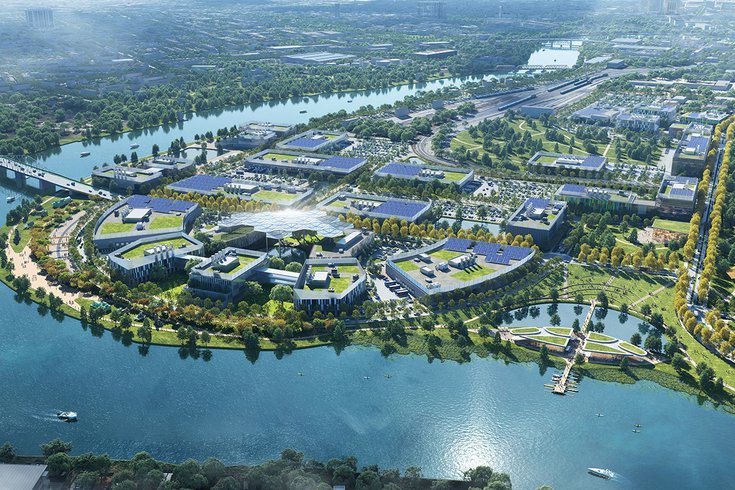 The site of the former Philadelphia Energy Solutions refinery will become an economic hub called The Bellwether District. Hilco Redevelopment Partners is leading the remediation and renewal of the 1,300-acre site, which was rocked by a series of explosions on June 21, 2019.

Hilco Redevelopment Partners, the company handling the cleanup of the 2019 Philadelphia Energy Solutions refinery explosion, has unveiled a key piece of its long-term vision for the 1,300-acre industrial property.

The developer said Monday that the site will be a future hub for logistics, e-commerce and life sciences called The Bellwether District.

"Nowhere is the story of re-creation and re-envisioning being played out more dramatically than it is here at The Bellwether District in Philadelphia," said Roberto Perez, CEO of Hilco Redevelopment Partners "The Bellwether District is a holistic, thoughtful reimagining of post-industrial property into a cleaner, greener and more sustainable workplace for generations of people and businesses."

Hilco officials estimate that the site, which encompasses roughly 2% of Philadelphia's landmass, will generate as many as 19,000 jobs in Southwest Philadelphia over the next 15 years. The site covers both sides of the lower Schuylkill River near Passyunk Ave.

The June 2019 explosion at the refinery produced a massive fireball with enough force to launch airborne fragments of heavy machinery, including a 38,000 pound surge drum, across the Schuylkill River. The fires at the refinery were caused by a failing pipe that leaked volatile chemicals in its alkylation unit, leading to a series of three explosions.

Horrifying explosion at the biggest oil refinery on the east coast in Philadelphia. Fossil fuels are not safe for our present or future. Solidarity with Philly residents. pic.twitter.com/zcXYytSp3X

No one was killed in the explosions, which happened during the pre-dawn hours, and only five people reported minor injuries.

The site in Southwest Philadelphia has been dedicated to the petrochemical industry for roughly 150 years. Philadelphia Energy Solutions had claimed to be the largest continuously operating refinery complex on the East Coast, processing roughly 330,000 barrels of crude oil per day at the time of the explosion, but it had run into a series of financial crises leading up to the 2019 explosion.

In the time since the Philadelphia explosion, Hilco's remediation of the site has entailed the removal of nearly 950 miles of pipe and 30,000 tons of asbestos. The company has described the decommissioning of the refinery as "complex," requiring a meticulous deconstruction blueprint and environmental testing to ensure the site's future safety for those who work there and live in surrounding communities.

Weeks after the disaster, tests conducted at the site's fence lines found that the refinery had the highest levels of benzene – a cancer-causing hydrocarbon – of the more than 100 U.S. refineries included in a final report by the Environmental Integrity Project.

The U.S. Chemical Safety and Hazard Investigation Board also determined that the explosion and fire released about 5,000 pounds of hydrofluoric acid, a chemical that can cause skin damage, chronic lung disease, blindness and other conditions.

As of Aug. 23, Hilco officials said approximately 50 oil tanks on site had been demolished. The only notable incident reported thus far was a fire that happened in August during the demolition of an empty oil tank, which may have had some oil residue smoldering inside. The fire was extinguished without any injuries.

Hilco's construction of a multi-modal logistics park at the site is expected to unfold over the next decade, supporting more than 13,000 project jobs. The company has estimated the project will deliver $2.3 billion in economic development to Philadelphia. 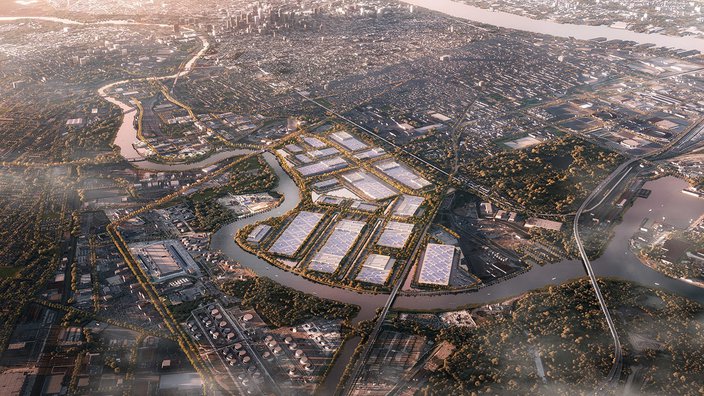 Aerial view of The Bellwether District. 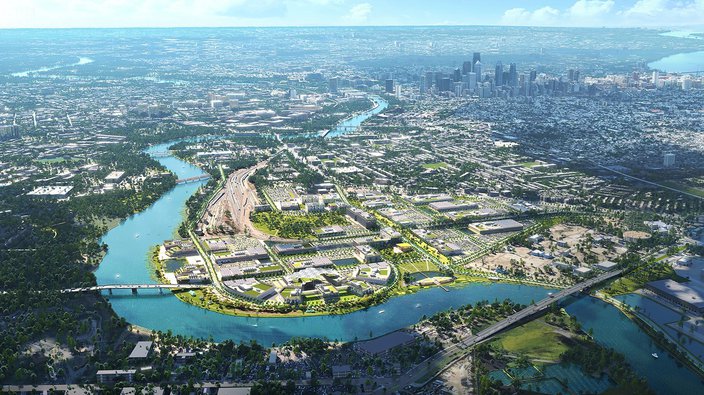 Another rendering of The Bellwether District in South Philadelphia.


Surveys and workshops with design professionals led to a series of recommendations for Hilco and the city, including the creation of a grid of streets and central boulevard through the site and the creation of new public green spaces.

To raise awareness about plans for the former refinery site, Hilco has partnered with the Philadelphia Eagles on several billboards and radio ads that will play in the coming weeks. SEPTA buses and various stations also will be branded with information about The Bellwether District.

Mayor Jim Kenney said of the project, it "creates jobs, ensures the future commercial viability of the site and decreases the former refinery's environmental impact."