By Monday morning, it will warm slightly and the winter storm will produce rain 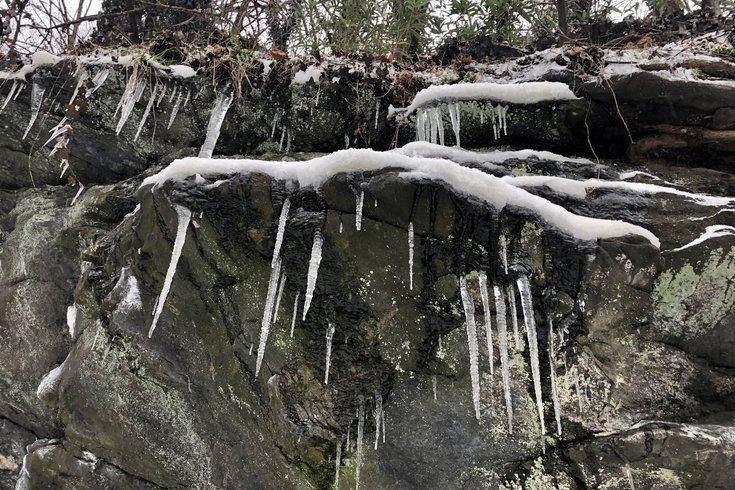 After extremely cold weather to start this weekend the Philly region, there will be a winter storm that brings snow, sleet and rain, starting Sunday afternoon into Monday. Overnight low temperatures Friday and Saturday will be in the teens and wind chills will make it feel much colder. The file image above show icicles hanging from rock near the Wissahickon Creek in February 2021.

The second winter storm of January is on the horizon for the Philadelphia region, as a mix of snow and sleet is forecasted to fall Sunday into early Monday morning. But first it is going to get dangerously cold.

The snow is predicted to begin after 1 p.m. Sunday, according to the National Weather Service, just as Eagles fans settle in to watch the wildcard game against Tom Brady and Tampa Bay. By 10 p.m., the precipitation will change to a mix of snow and sleet.

MORE: Speed camera program to begin on I-95 in Wilmington

As temperatures rise more, the weather system will produce snow and rain until 1 a.m. Monday before giving way to rain until 1 p.m. that afternoon.

It's uncertain how much snow and sleet could fall Sunday into Monday. As of Thursday, there was a 50% chance of accumulation but that all likely will be washed away as it gets above freezing and the precipitation turns to rain, the NWS's extended winter weather outlook says. Snowfall accumulations will be greater north and west of the city where the temperature remains colder.

This storm will produce strong winds along the coast and potentially cause coastal flooding. Wind speeds could reach 60 mph near the shore late Sunday night.

Before that, temperatures plummet will be well-below freezing. On Friday night into Saturday, the low will be around 14 degrees in Philly and it will be blustery. Wind chills from winds gusting up to 30 mph will make it feel like zero degrees and possibly colder. Then Saturday night, the low temperature in the city will get down to 12 degrees.

Philadelphia had its first significant snowfall of the season last Friday when parts of the city got as many as 5 inches of snow. On Jan. 3, the region's first official snowstorm of the season buried parts of the Jersey Shore under more than a foot of snow.

Below is the NWS's forecast for Philadelphia through Tuesday.