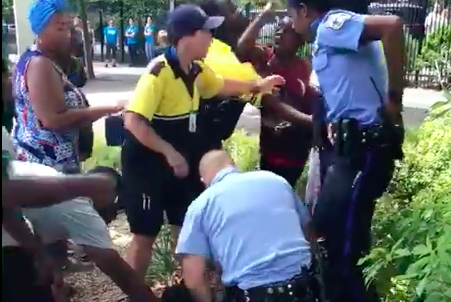 A video posted to Facebook on Thursday at about 12:30 p.m. shows a young black male being arrested by two Philadelphia Police officers.

A video taken outside the Philadelphia Zoo on Thursday allegedly showing the arrest of a black teenager selling water has gone viral on Facebook.

The 92-second video shows what appears to be an aggressive scuffle between a teen and two Philadelphia police officers outside the zoo's front gates. At the same time, two zoo public safety officers appear to be arguing over the incident, one asking the other, "Is this what you want?"

Two officers eventually place handcuffs on the teen and escort him away as a number of children and adults look on.

Philadelphia police have yet to confirm the arrest, but said they are aware of and are reviewing the incident.

But in a statement to PhillyVoice, Dana Lombardo, director of communications at the Philadelphia Zoo, called the arrest "unfortunate" and "unusual."

Lombardo alleged there have been multiple incidents with the same group, including "soliciting money from Zoo guests" and "throwing rocks at a Zoo member (just the previous day)," as well as "harassing another female public safety officer just before this incident occurred."

It's the zoo's policy to ask anyone engaging in "aggressive" or "commercial" behaviors to leave the entrance plaza, she said.

"When asked to leave the area, the group began to move off but made a threatening remark to the public safety officer as a Philadelphia Police Department vehicle was driving by," the statement read. "At that time the public safety officer flagged down the Philadelphia Police Department vehicle and asked for help in dispersing the group.

"Unexpectedly, the subsequent interactions between PPD and the group resulted in the arrest of one of the individuals involved. This is an unfortunate and unusual incident at the Zoo. Philadelphia Zoo is an integral part of the City of Philadelphia and is proud of the diversity of the staff who work here and guests who visit; we work closely with our neighbors in the West Philadelphia community and the Philadelphia Police Department and will continue to do so."

The video was reposted by Black Lives Matter activist Asa Khalif, who also issued a statement on the arrest, saying it "would not go unanswered" in a Facebook live post on Friday afternoon.

"The Philadelphia cops are out of control," Khalif said.

"They were selling water," he added. "Not crack, not drugs, not any of that nonsense. They were selling water to raise money. Entrepreneurs, that's what they were and that's who they are. ... It ended in arrest. A violent arrest. And I'm not gonna tolerate that. ... We're not tolerating that kind of nonsense when it comes to our children."

Khalif said The Coalition for Black Lives is investigating the incident and has reached out to the Philadelphia Zoo and the parents of the individual arrested for more information.

"They have been warned that we want answers and if we don't get those answers, we will be in front of the zoo and protest in front and shut that zoo down and the street if necessary," Khalif said.