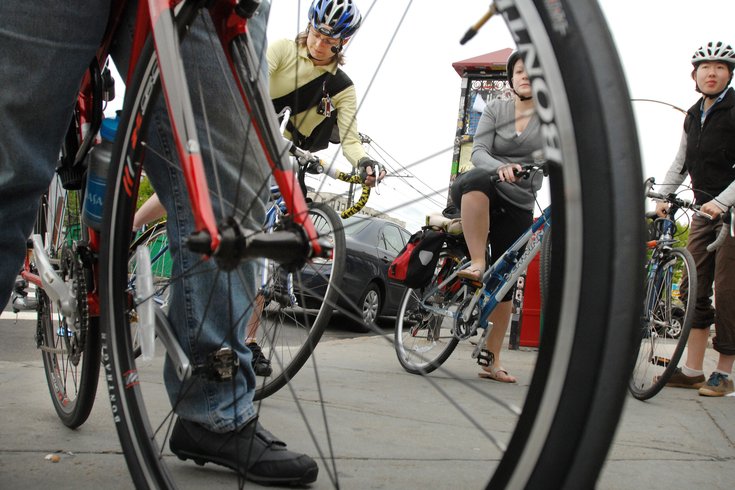 South Street is closing to vehicle traffic from river-to-river Sept. 24 for an open streets even aimed at cyclists and walkers.

Bike to work? Join the club.

Yet another report, this time released by the Center City District/Central Philadelphia Development Corporation, shows that the number of Philadelphians who choose to bike to work has increased again, and pretty dramatically. Since 2010, the average number of morning bike commuters jumped by 79 percent, and 22 percent from 2014 when the CCD last conducted the survey.

To find the number, the organization took a look at how many cyclists came into Center City on northbound streets between 8-9 a.m. in mid-September.

The survey, whose results were released Tuesday, also found that 13th Street and 22 Street, both of which have bike lines, were most used.

But, the number is no shock. The Bicycle Coalition of Greater Philadelphia has been reporting growth for years while City Council continues to push for pro-bike legislation. 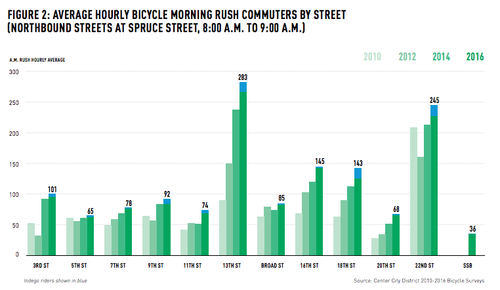 Take Councilman Bobby Henon's proposal for a new, buffered bike lane in Mayfair. His efforts to create the lane, which would create a physical separation between cyclists be it by way of flexible polls or potted plants, passed council unanimously in June and opened in September.

Henon is far from the only city official on board with making Philadelphia a better biking city. Mayor Jim Kenney has also pledged to add 30 miles of protected bike lanes throughout the city while he's in office. It's a big deal, considering that Philadelphia was one of three cities without a "protected bike lane network," according to the Coalition.

Though, in Philadelphia, implementation for the protected lanes is difficult. Making bike lanes could mean getting rid of current driving lanes or parking spots.

In its report, the CCD acknowledges that the majority of bike commuters are between 18-34 while the residents who make up the civic organizations that would help determine the fate of bike lanes and other features are typically older. Seventy-seven percent of commuters are also non-Hispanic whites, the report shows.

Though, one thing was clear between the cyclists and motorists interviewed for the survey – people have a strong dislike for the state of Philly streets. Both parties said that potholes, uneven pavement surfaces and a lack of traffic enforcement were "top transportation priorities to be addressed."

It's back @philly311 pot holes filled 2 wks.ago. there's a water leak under causing this at Front & Wingohocking sts pic.twitter.com/UNmW7CrTBi

The city's Geographic Information Systems Services put together an interactive map that shows what Philly311 requests were most common in each zip code throughout the city.

The Streets Department has fixed more than 27,000 potholes in 2016, PlanPhilly reported.