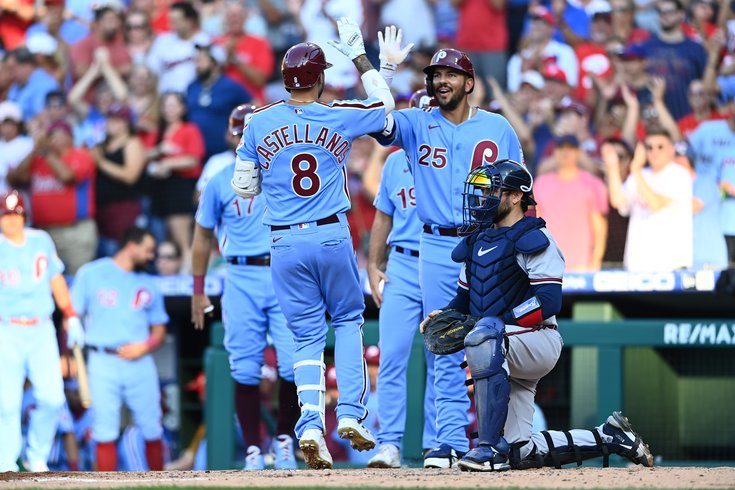 The Phillies salvaged an important win in Thursday night's blowout over the Braves.

The Phillies bats exploded for 14 runs as they salvaged the final game of a series loss to the Braves Thursday, one of the teams leading them in the wild card race.

As we've done after every series so far this season, let's take a look at some of the major takeaways before they turn the page for another important series against a contender at Citizen's Bank Park:

• There was a clear post Bryce Harper injury hangover to start the series, and understandably so. With Harper getting surgery to his injured thumb and out until at least mid to late August, the Phils seemed pretty downtrodden, scoring just four runs in the first two games of the series — with a particularly frustrating loss in Game 1, 3-5, wasting a solid Zack Wheeler start. The pen blew a tie game in that one.

It was nice for everyone to get the monkey off their backs in the finale of this series, perhaps a signal that they are putting the injury to their best player behind them. We'll see if it creates any momentum for the offense going forward.

• Nick Castellanos finally found a way out of his June slump, at least the Phillies hope, when he blasted a three-run homer Thursday, his first of the month of June. With their superstar outfielder sidelined, there may not be a player with more importance offensively than Castellanos may have over the next couple of months. If he can find his hitting stroke, his contributions could go a long way toward making up for the loss of the MVP.

• There were two key debuts this past series for the Phillies you may have heard something about. First, Darick Hall, a longtime minor leaguer whose power stroke earned him a big league call this week. After an 0-fer in his debut Wednesday, the big DH got his first two big league hits in the series finale, both home runs. That'll probably earn him a roster spot for a few more games at least, and could spell the end of Mickey Moniak's latest MLB stint as the team will need to trim a roster spot when they add a fifth starter (likely Bailey Falter).

The second debut was former first overall pick Mark Appel — yes you read that right, first overall pick — who has had quite the journey to the majors after some serious struggles and even quitting baseball altogether. He tossed two scoreless frames against the Braves and if he winds up being a lasting bullpen piece it will be an amazing development for the almost 31-year-old rookie.

• The Phillies' 19 wins in the month of June are the most since 2010. They remain two and a half games behind the Cardinals, who come to town this weekend.

• Philadelphia will throw Falter (who will fill in for Zach Eflin, currently in the IL with a knee bruise) and Kyle Gibson in the first two games of their weekend trio of games against the Cardinals before a Sunday Night showdown between Wheeler and Adam Wainwright, two of the NL's best starters. The Phillies can close the gap for the final wild card spot with a series win before the Nationals come to town next week.