Are Phillies wasting Kyle Schwarber's power? Who should lead off? 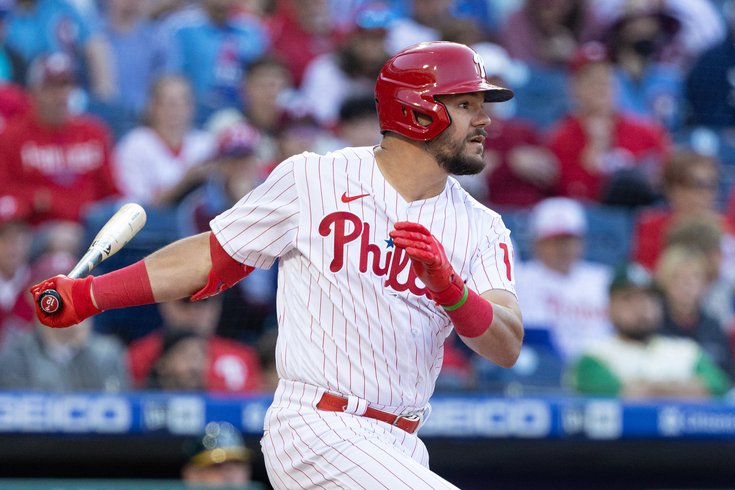 Kyle Schwarber turns on a pitch at Citizens Bank Park.

The Phillies could be trying to zig where everyone else zags.

With Kyle Schwarber (and everyone else they try) in the leadoff spot the season, the Phillies are in a way, putting themselves in a hole before the game really even starts.

Through 99 games this season, only one team has a worse batting average in the leadoff spot (the Athletics, who have 14 fewer wins than the Phillies), and only three have a worse on base percentage. With no true speedster who hits for a high average on the roster, the Phillies have elected to go with Schwarber — the NL leader in home runs — as their first man up this season.

Schwarber has led off in two-thirds of the Phillies games this season and he's hit 24 homers in the spot. He has also walked 34 times there, helping the Phillies collect 46 of them in total (the 6th most in the leadoff spot in MLB).

But are they wasting Schwarber's long balls? Isn't there a better approach, even for this team?

That last stat has to be troubling. No team has gotten more strikeouts in the leadoff spot than the Phillies this season.

So is Schwarber just the best of a bunch of really bad options right now, as Bryce Harper and Jean Segura work their way back into the lineups? Is this a sleeper of a need at the trade deadline?

Let's first nix Rhys Hoskins, J.T. Realmuto and Nick Castellanos from the list of potential leadoff men. Each provides middle of the order power and neither Hoskins (.232 in 14 leadoff starts) nor Realmuto (.154 in three) has shown they are a good fit for the role.

Here's a look at a few things they could try that would free up Schwarber to be a cog in the middle of the lineup and potentially a better run producer:

Bohm is such an obvious choice here and it's remarkable Rob Thomson — who has done a spectacular job thus far in his role as "interim" manager — hasn't really tried it yet. Bohm is the active batting average leader for the Phils (as Harper rehabs) and the team would certainly not be wasting any power with him atop the lineup (he has just two homers).

Bohm's 19.6% strikeout rate is one of the lowest on the team, but his walk rate is just 5 percent and perhaps that is one of the biggest reasons Schwarber and his team best 12.6 percent base on balls rate are currently leading off. Bohm is in the midst of a 13-game hitting streak and has hit safely in all but one game in the month of July. Maybe ride the hot hand?

Stott's raw numbers in 2022 haven't been particularly impressive — he got off to a very slow start — but of late he's rounding into form and flexing some power (seven homers in 226 at bats) along with plate discipline that rivals Schwarber's (he strikeouts just 17.7 percent of the time, almost half as much as Scwarber and his walk rate is fourth on the team).

“I saw about 30 at-bats and there weren’t many bad at-bats,” Thomson said during the Braves series (via The Athletic). “Almost every one of them was just what you are seeing right now. Really good plate discipline, using the field, showing a little power, hitting balls in. Yeah, he’s got all those traits. He really does. And he handles lefties. He stays in on lefties very well.”

Centerfielders typically make good leadoff men. Vierling has some speed and has actually been extremely good in limited reps leading off an inning, hitting .286 this season after 38 tries. He has pretty good strikeout and walk rates relative to the rest of the team.

He was great in 2021 but has dropped off a bit this season. But perhaps Thomson will continue to show faith in his youngsters by moving Vierling up in the order.

Jean Segura (when he returns)

The Phillies infield situation may be a fluid situation with Segura nearing his return to the majors after missing some time due to injury. However, the simplest solution could be to tag Segura as the leadoff man. After all, he's done it in 410 games and over 1,737 at bats during his career.

Over that stretch, the 32-year-old has hit .295 in the No. 1 batting slot, with a .339 on base percentage and 76 stolen bases in those games leading off. Has he lost half a step as he's aged? Maybe? But why not go to someone tried and true and allow your power hitters to bring them home?

The clock is ticking with the MLB's trade deadline looming Tuesday. There are a bunch of good leadoff hitters who could be had and some that would also fill a need in the field.

Cedric Mullins is one such guy who comes to mind. He's hitting .260 with a .322 on base percentage while playing centerfield for the Orioles. He also hits left handed. Other options from selling teams include Robbie Grossman, a Tigers outfielder on an expiring deal with a .311 on base rate this year and .348 for his career, as well as Whit Merrifield, a Royals outfielder and second baseman who has led the AL in stolen bases three times and has a .332 on base percentage.