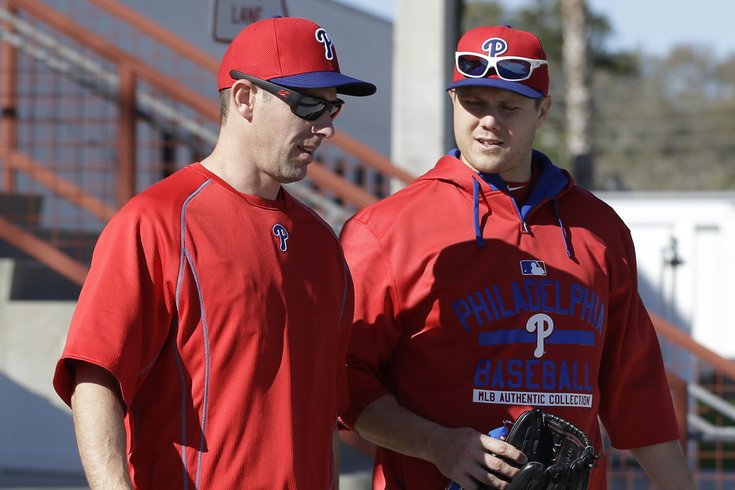 This is going to hurt a little bit.

Pitchers and catchers had their first workout of the spring Thursday in Clearwater, but the players you saw out there -- at least the ones you know best -- may not be around much longer.

Cole Hamels, Cliff Lee and Jonathan Papelbon are three of the Phillies best veteran trade assets, and if the team is truly intent on rebuilding, all three could be shipped out by the trade deadline, if not sooner.

If you're a fan of seeing young, unproven talent, then that may be music to your ears. But if you like seeing the big-name players do their thing down at Citizens Bank Park, you may want to avoid watching too many Phillies games this summer. They're a team in transition, to say the least, and part of that transition will be saying goodbye to players you've been cheering on for years, like Jimmy Rollins.

The uncertainty will make camp interesting, if nothing else. And hey, wins and losses are meaningless this time of year, so you have that going for you, which is nice.

Here's a look at the Phillies' spring training roster as it pertains to the pitchers:

Cole Hamels, LHP - Hamels said Wednesday that he wants to play for a winner. That's not going to happen in Philly -- at least not for a while. However, if general manager Ruben Amaro, Jr. is unable to make a deal during spring training, he'll be the team's opening day starter. I'd be surprised if Hamels is still with the team on August 1.

Cliff Lee, LHP - After suffering an elbow injury last season, Lee will have to prove he's healthy -- not to Amaro and to the Phillies, but to other teams that may be interested in acquiring the former Cy Young winner at some point this season. That's just the 2015 Phillies. Get used to it.

Aaron Harang, RHP - Acquired this offseason after making 33 starts for the Braves in 2014, Harang could be the team's No. 1 starter by the end of the season if they move both Hamels and Lee. In the meantime, look for him to start the season in the middle of the rotation.

Miguel Alfredo Gonzalez, RHP - Injuries hampered the Cuban pitchers progress last season after he signed a three-year, $12 million deal last winter. He'll likely be in the rotation when the season starts, as long as he can stay healthy.

Chad Billingsley, RHP - The veteran righty, who underwent Tommy John surgery in 2013 and another operation last year to repair the flexor tendon in the same arm, will have to prove he's healthy before making his way into the starting rotation, which could open up an opportunity for other pitchers to fill in until that time comes.

Jerome Williams, RHP - Assuming Billingsley isn't 100 percent on April 6, there's a good chance Williams could enter the season as the team's fifth starter. In nine starts last season, Williams was sharp, posting a surprisingly low 2.83 ERA, and in the process earned himself a one-year deal from the Phillies.

Jesse Biddle, LHP - Despite a poor showing in 2014, the Phillies added the former first-round pick to their 40-man roster earlier this winter. Biddle, who graduated from Germantown Friends before being selected by his hometown team in the 2010 draft, comes into camp with much to prove. Considering the fact that he's yet to reach the triple-A level, he's a very long shot to make the opening day roster.

Jonathan Pettibone, RHP - After going 5-4 with a 4.04 ERA in 18 starts with the Phillies in 2013, the 24-year old righty missed most of 2014 due to shoulder surgery. If he looks healthy in Clearwater, there's a chance he cracks the rotation for the start of the season. If not, he could start in the bullpen, or perhaps spend some time with the Iron Pigs until the team deems him ready for big league action.

Joely Rodriguez, LHP - At just 23, Rodriguez struggled last season in the Pirates organization after making the jump to double-A ball, much like Biddle did. Acquired in the deal that sent Antonio Bastardo to the Pirates, look for the young lefty to join Biddle in Lehigh Valley to start the season.

Jonathan Papelbon, RHP - Much like the Phillies top two starters, there's a good chance the team's closer doesn't finish the season in Philly. That may not be a bad thing, however, as it will give flamethrower Ken Giles a chance to get more experience finishing games.

Ken Giles, RHP - He'll start the season the same way he finished 2014, as the team's setup man, unless they work out a deal for Papelbon. And keep an eye on his progress this season, because as soon as Papelbon blows a save or two (assuming he has that many chances on a team this bad), fans will begin clamoring for the 24-year-old righty who can top 100 MPH on the gun.

David Buchanan, RHP - Last season, Buchanan started 20 games as a rookie for the Phillies, posting a 6-8 record to go with 3.75 ERA. In his second season, however, the 25-year-old righty could be moved to the bullpen with the returns of Lee and Pettibone from injury and the additions of Harang and Billingsley.

Justin De Fratus, RHP - Count on the 27-year-old being on the 25-man Opening Day roster. He was strong last season after a rocky start, finishing the season with a 2.39 ERA thanks to a 17-inning scoreless streak that lasted over a month.

Jake Diekman, LHP - So far, we've only mentioned righthanded arms in the bullpen. The fact that Diekman is a lefty won't be the only reason he makes the 25-man roster, but it certainly won't hurt.

Phillippe Aumont, RHP - He came to the Phillies in the deal that sent Cliff Lee to the Mariners a few winters ago and has yet to prove worthy of a full-time bullpen spot. Now that he's out of minor-league options, Aumont needs a strong showing this spring to convince the front office he's worthy of keeping..

Luis Garcia, RHP - He struggled out of the 'pen last season, and could lose out to our next guy if the Phillies want another lefty reliever.

Mario Hollands, LHP - All other things being equal, Hollands has the edge over Garcia because of what side of the mound he pitches from. That being said, he'll still need to beat out a plethora of competitors this spring if he wants to crack the roster.

Andy Oliver, LHP - Could Oliver be the lefty Amaro is looking for? He's a Rule 5 pick, so he needs to stay on the 25-man roster all season. That may not bode well for a guy like Hollands.

Ethan Martin, RHP - Once a starter, Martin will compete for a bullpen spot, but he's coming off a back injury, so there's still work to be done.

Nefi Ogando, RHP - He's the Ricky Vaughn of the 2015 Phillies. At just 25, Ogando is up there with Giles when it comes to velocity. But unlike Giles, he'll probably start the season in the minors due to control problems.

Adam Morgan, LHP - Yet another pitcher coming off injury with something to prove. He's likely to start the season in triple-A Lehigh Valley.

Kevin Slowey, RHP - After spending the last two seasons with the Marlins, Slowey has a lot to prove if he is to make the big-league roster.

Aaron Nola, RHP - Drafted out of LSU last June, Nola could join the Phillies at some point this season, but not right away. He'll likely start at double-A Reading, but if he continues to progress as he did last year, don't rule out seeing him at Citizens Bank Park this summer.

Zach Eflin, RHP - Like Nola, Eflin will probably start the season in Reading. He can't even legally buy beer yet, but after coming to the Phillies in the deal that sent Jimmy Rollins to the Dodgers, he may not be that far from seeing major-league action.

Tom Windle, LHP - Also part of the Rollins deal, Windle adds much-needed left-handed pitching to the Phillies farm system. He's got some work to do before joining the big club, but he's definitely worth keeping an eye on.

Ben Lively, RHP - He was the Reds' minor league player of the year last season, but they gave him up in exchange for Marlon Byrd.

How much Hamels, Lee?

How much of Cole Hamels will fans actually get to see this year? And how much will be too much? The Phillies are risking Hamels injuring himself -- although he's been pretty healthy most of his career -- and screwing up any intentions they have of dealing him. The same goes for Cliff Lee, although he actually needs to prove he's healthy before any teams will want him.  And unlike Hamels, injuries have been an issue for the 36-year-old lefty.

Granted, Hamels remains the prized gem of the Phillies roster, considering age difference and relatively similar salary implications. However, if Amaro remains stubborn in his demands for a high return for Hamels, don't rule out the possibility of Lee moving first. He won't fetch nearly the haul Hamels would, so there's a chance Amaro finds a willing partner of Lee before Hamels.

Complicating matters for both the Phillies and interested teams is that Lee has a vesting option of $27.5 million if he hits 200 innings pitched this season. That's well more than he's worth at this point, and could scare some teams off that are looking for a rental player at the deadline.

How long will it take for fans to turn on Jonathan Papelbon? With Ken Giles, who posted a 1.18 ERA in 44 appearances in 2014, waiting in the wings, Papelbon must perform it will get ugly.

I don't think Papelbon "blocking" Giles is actually that much of an issue. Giles will be the team's setup man, so Papelbon won't exactly be taking playing time from him. He'll get essentially the same amount of experience he would as the closer, just in a slightly different role.

Here's how I see the rotation and bullpen looking when the Phillies open the season against the Red Sox:

*Could be Buchanan if he's not ready to go

What they're saying about the Phillies pitching

• Bob Ford of the Inquirer says that Hamels' comments could hurt the Phillies at the bargaining table.

• Cliff Lee got some psychic help answer questions at his first press conference of spring training.

• Sandberg doesn't think Lee's elbow will be an issue, although the lefty has been suffering from an upper-respiratory illness.

• After starting 20 games last season, Buchanan knows his spot in the rotation is anything but safe.

• The Phillies bullpen could actually be their strength in 2015.

• The Phillies have some hard-throwing young pitchers, and David Murphy of the Daily News has an early nomination for "Chillest Dude in the Clubhouse."