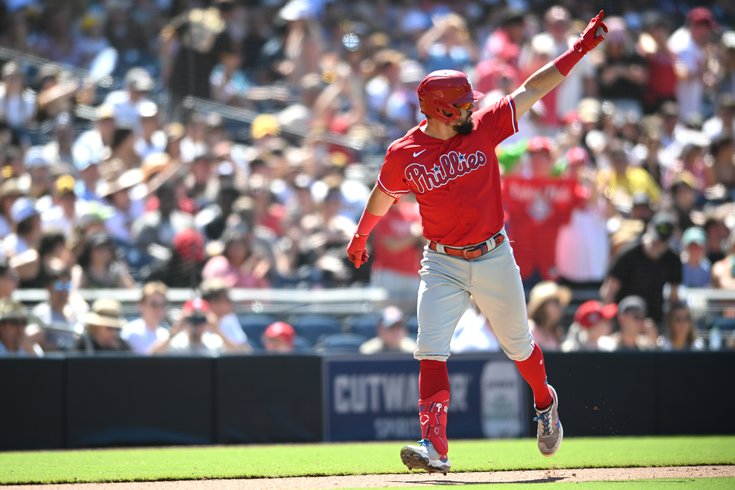 Morale is at a low among Phillies fans after Bryce Harper's broken thumb situation, but the team itself stepped up in the reigning National League MVP's absence. Taking three out of four in San Diego, the Phils are just 1.5 games out of the second Wild Card spot. Making ground against the Padres, who are currently in the top NL Wild Card spot, was huge.

Some thoughts and points on the Phillies as of late...

As mentioned, Harper was a hit by a pitch from Padres starter Blake Snell on Saturday night. An MRI confirmed that Harper has a fractured left thumb. To say that this is devastating for the Phils' playoff chances would be an understatement. If he's able to only miss four or six weeks, this team has a shot to continue to tread water in the Wild Card picture. If it requires surgery and Harper is out the remainder of this season, to say nothing of that nagging UCL tear, the Phillies are likely toast.

More than ever, the Phillies need new sluggers Kyle Schwarber (✅) and Nick Castellanos (❌) to pick up the slack. Also, Dave Dombrowski might want to hit the phones and start making some calls about help at any of the three outfield spots.

June Schwarber is the real deal. The lefty slugger is hitting .283 with a whopping 1.068 OPS in 24 games this month. In the game where Harper went down on Saturday and on Sunday, Schwarber combined for five total RBI. An opposite field, three-run homer on Sunday with the Phils down two in the seventh inning is exactly the timely hitting needed if this ball club is going to survive its Harper-less lineups:

July 1 may be on Friday, but don't tell that to Schwarber, who's been raking all June.

Captain Obvious incoming... Not only will the Phillies' hitters need to bring it with Harper out, but their pitchers will need to do so also. Know who wasn't up for that task over the weekend? Kyle Gibson. On Sunday, in just 2.2 innings, Gibson surrendered five runs while walking three batters. If not for Schwarber doing his best Jim Thome impersonation, that was likely a Phillies loss, one that would've been pinned on Gibson.

The Phillies bullpen pitched 13 innings in four games against the Padres. How many runs did they give up? Zero. ZERO! That feels impossible, especially since it seemed the stars weren't aligned with this Phillies squad following Harper's injury, but, hey, props for the relievers for getting it done. That torrid pace will not continue, but it's encouraging enough that perhaps the pen can get by until trade deadline help arrives in Philly.