Philly brutally snubbed yet again by a 'Best Cheesesteaks' list 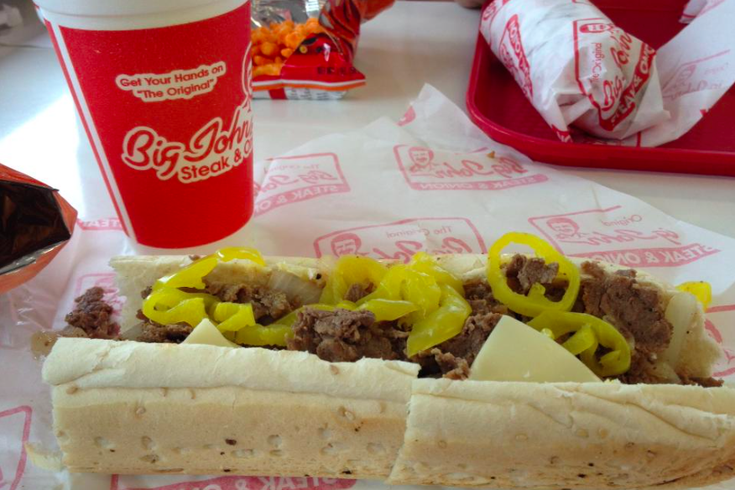 This is supposedly the best cheesesteak in the United States of America.

Unbelievable. There is some kind of conspiracy going on with rankings of Philly cheesesteaks — namely, Philadelphia isn't getting the deferential top rank.

All of us here were just starting to get over that horrible USA Today poll whose design handed Pittsburgh an easy road to claiming  The Groove Cheesesteak Co. as Pennsylvania's best. That was an abomination of democracy.

It's another matter entirely when the editors of a food-focused website make it a point not to put a Philadelphia restaurant atop their list of America's best cheesesteaks. This is a list, mind you, that would never even exist without Pat and Harry Oliveri's Philadelphia hot dog stand.

Guess what? The Daily Meal went and did it, probably going by the same logic that says the Talking Heads cover of "Take Me to the River" is better than Al Green's original. It is, but come on.

Is it possible for a copy to be better than its inspiration? Sure. Is that likely in the business of cheesesteaks? No, it isn't. There are dozens and dozens of cheesesteak spots in Philadelphia. One of them has to be the best, unless we as a city are about ready to relinquish ownership of the meal. We can start making steakcheeses with cheesy steak wrapped around a roll. That'll show them, biters.

This is bad, by the way. Philadelphia didn't even get second place here. Campo's, the Old City and stadium deli that touts itself as Philadelphia's best cheesesteak spot, placed third, followed by a slew of familiar Philadelphia and South Jersey restaurants.

At number one, we have Big John Steak & Onion, a chain in Michigan.

This Michigan mini-chain has 16 locations, most of which are in Flint. In business since 1972, they’re using fresh rib-eye steak in their cheesesteaks, griddled to order and piled onto a freshly baked roll with or without onions. White American is the cheese of choice here.

Right, we're sure that goes great with a tall glass of water.

This family-run shop is serving the best cheesesteaks in Los Angeles, starting with rolls shipped in from Philadelphia’s Amoroso’s. The formula here is simple — griddled thin-sliced rib-eye, grilled onions, and your choice of American, Cheese Whiz, or provolone — but the ratio is a lot harder to perfect than you might think. These guys hit the nail on the head.

Alright, points for the Amoroso's rolls. That's thoughtful, and the picture on the landing page of their website looks phenomenal. Still, the name of the place is exactly the reaction it warrants here.

We should all be proud that the cheesesteak has become a national dish. It's one of Philly's greatest exports. But these lists that don't put one of our restaurants at the top? Get the hell out of here with that.