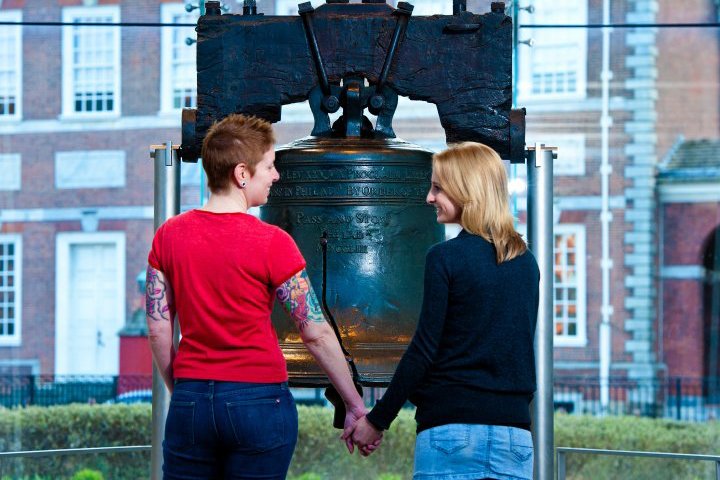 Brotherly or sisterly, love is love.

As the Fourth of July festivities set to commence around Philadelphia and down the shore, the LGBT community will mark an extra celebration. July 4, 2015, is the 50th anniversary of the LGBT civil rights movement, as the first demonstration demanding the equality for gays took place at Independence Hall July 4, 1965. Called the Annual Reminders, demonstrations continued to take place there each year through 1969.

Thus, events will be held to commemorate this occasion and the pioneers of the LGBT civil rights movement from Thursday, July 2 through Sunday, July 5. Throughout the weekend, the National Constitution Center, the National Museum of American Jewish History, The African American Museum in Philadelphia, the Liberty Bell Center and the Free Library Central Branch will host special LGBT history exhibits.

Thursday's activities kick off with a wreath laying at the gay pioneers historical marker at 2:15 p.m. on the northwest corner of 6th and Chestnut streets. At night, a National Politics and a National Legal Panel will take place followed by the 50th Anniversary Party at NMAJH and parties in the Gayborhood.

Saturday at 2:15 p.m. the big anniversary celebration takes place at Independence Hall. Comedian Wanda Sykes will be the master of ceremonies, hosting a day of tributes to gay pioneers Barbara Gittings and Frank Kameny, musical performances and reenactments of the Annual Reminder demonstrations.

James Obergefell, the plaintiff in the Supreme Court case which recognized same-sex marriage as a fundamental right, thus legalizing it throughout the U.S., will also appear. Though the keynote speaker has yet to be announced, a keynote speech will take place followed by a performance of "True Colors" by the New York, District of Columbia and Philadelphia Gay Men's Choruses.

Beginning Sunday at noon, a street festival in the Gayborhood will finish off the weekend's celebrations. The Annual Reminders Block Party will run down Locust Street from Juniper to 11th Streets, plus 13th, Camac and 12th Streets from Walnut to Spruce streets.

A formal dedication of the rainbow crosswalks at Locust and 13th will take place during the festival and Pride Central will be located at 12th and Locust. Just like OutFest, the block party will have tons of food and drink vendors, activities for all ages and over 110 local business partners.

The weekend is full of events celebrating the Annual Reminders. Click here for the full schedule.