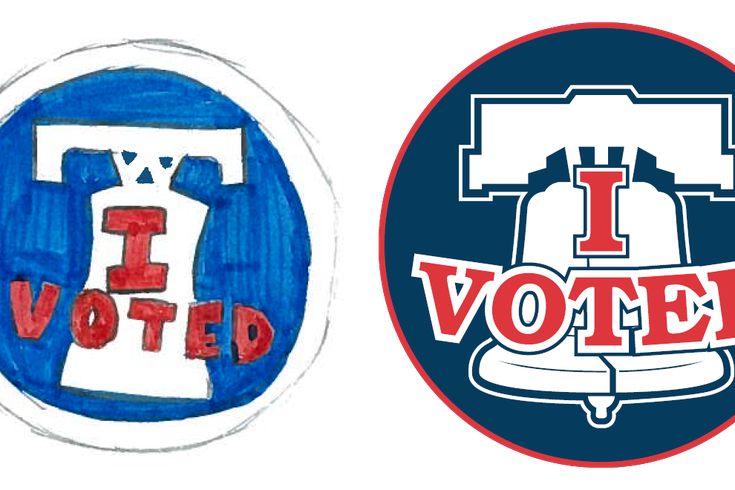 Philadelphia residents can vote on their favorite design for the 2020 'I Voted' stickers that are handed out at polling places. Several of the finalists designs incorporated the Liberty Bell, like this one by Philadelphia student Elodie Breslin. Voting continues until March 1.

Before deciding which candidate they want to in the White House this November, Philadelphia voters have an even more important decision to make: what the city's "I Voted" stickers will be for 2020.

The Philadelphia City Commissioners, in partnership with the School District of Philadelphia, are asking city residents to vote for their favorite sticker design ahead of the state's presidential primary election this spring.

Voting officially began Thursday morning after the City Commissioners released the nine finalists for the sticker contest, which was open to all Philadelphia residents and students. The contest received 150 entrees, according to city officials.

The five judges selected three adult entrees, as well as two each from the college, high school, and elementary/middle school levels. The nine artists range from elementary school students to professional graphic designers.

"I know the ‘I Voted' stickers may not be the most important thing that we do, but it is certainly something that the public is highly passionate about" City Commissioner Chairwoman Lisa Deeley said. "With the all-important 2020 elections upon us, this is the perfect time for us to roll out a new, unique sticker and get people excited about going to the polls. I am so happy with the wonderful designs that Philadelphians get to choose from. I hope everyone goes out and votes and gets their new sticker in April."

Voting, which is open until March 1, can be done either directly on the City Commissioners' website or here via SurveyMonkey. The winner will be selected soon thereafter and the new stickers are expected to be in place before the primary on April 28.

All of the designs can be seen below.

🚨🚨🚨 The finalists for the new 'I Voted' sticker have been announced and voting is now live. Vote for your favorite anytime between now and March 1st here ➡ https://t.co/RSgsPtGscv pic.twitter.com/ROOcjIk65M

Some of the designs include replicas of the Liberty Bell, City Hall, Independence Hall, the green street signs, and the SEPTA logo. All designs will be translated into Spanish.