Philly gets new bus shelters at no cost to taxpayers 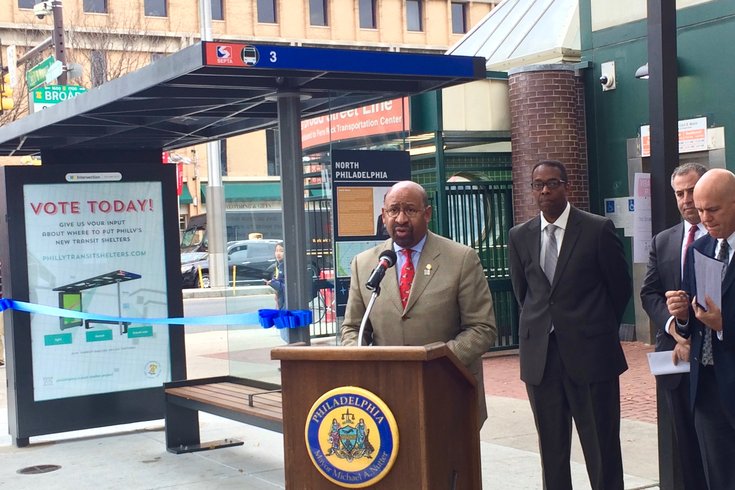 Mayor Michael Nutter, flanked by City Council President Darrell Clarke (D-5th District) announce a plan to install 600 new bus stop shelters, like the one seen here at Broad Street and Cecil B. Moore Avenue. They will be built at no cost to city residents.

A bus stop is something of a ubiquitous urban element.

Walking through any neighborhood in Philadelphia, you're likely to stumble on them everywhere.

A covered bus stop, however, can seem harder to find when you need to catch a bus in the rain.

But it might soon be easier. The city unveiled plans on Wednesday to construct 600 new bus "shelters" at some of SEPTA's more than 8,000 bus stops.

And, according to Denise Goren, director of the Mayor's Office of Transportation and Utilities, they will be built and installed without costing the city a dime.

"People have been waiting a long time for shelter," she said. "Well, today we are going to bring them shelter."

Goren said it has likely been more than 20 years since the city built bus shelters.

Now, with the new project, the city will not only be able to replace damaged shelters at many bus stops but gain a revenue stream, she said.

The city has negotiated a deal with Intersection, the technology and design company that created the structures with help from Philly-based architecture firm Digsau, that over the next 20 years is guaranteed to generate at least $100 million of revenue for its general fund through advertising at the shelters. 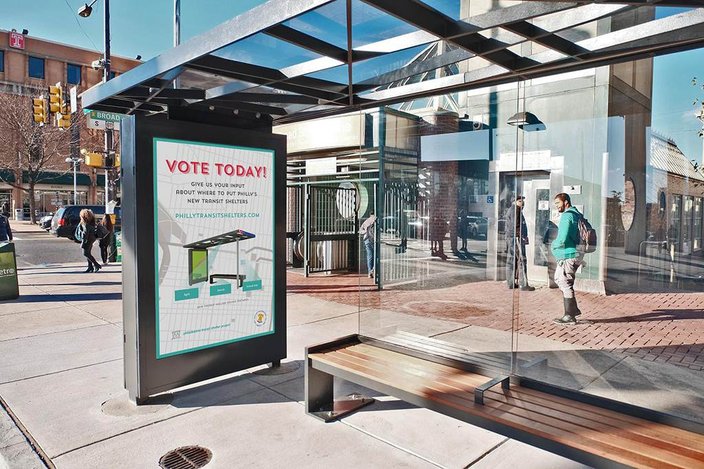 A new shelter will protect riders at a SEPTA bus stop at Broad Street and Cecil B. Moore Avenue. (Source: City of Philadelphia)

The shelters will have advertising, some will have digital screens, to allow them to generate revenue.

According to Goren, the deal will require that the city gets a percentage of ad revenue for its general fund, but she wasn't ready to identify that percentage. Instead, she said, the rate will depend on the amount of ad revenue once the bus shelters are installed.

If the advertising plan proves successful over the life of the agreement, the city could make more than $100 million from the deal, she said.

"It could be faster and it could be much more," she said.

Initially, she said, the advertising revenue will be used by Interstate to recoup capital costs of about $12 million for the bus shelters. After that, Goren said, the city will get its share.

During a Wednesday morning press event to announce the new shelters, Mayor Michael Nutter visited the first new shelter at Cecil B. Moore Avenue and Broad Street, and shared his thoughts on the new project.

The shelters feature a clear roof, slightly tinted to allow sunlight inside, as well as an opening on the rear, so handicapped riders can gain access without having to move into the street.

The shelters feature maps and information about SEPTA routes, as well as LED safety lighting. And, as Nutter pointed out, some shelters will share a bit of local history. The new shelter at the Temple University campus will tell the history of Cecil B. Moore.

"I dare say that Cecil B. Moore would be pleased with this project," said the mayor.

Nutter applauded the design, saying that it was about time the city replaced bus shelters throughout Philadelphia, as many have gone in disrepair for some time.

"They are just beat. They are tired and worn out," he said.

"In this particular case, we were able to solve many problems," he said. "We figured out a way to save money. ... This is a very creative approach."

Local residents and SEPTA riders can decide where they'd like to see the new bus shelters installed. To vote and to learn more about the shelters, visit phillytransitshelters.com.