Actress-turned-producer Sarah Megan Thomas, a Haverford native, is teaming with "Orange is the New Black" and "How to Get Away with Murder" star Alysia Reiner to film the female-driven Wall Street flick "Equity."

The film, which has already been written by Amy Fox and will be directed by Meera Menon, will begin filming on July 11. Thomas said that some filming will be done in Philadelphia but wouldn't specify exactly where -- those details are still under wraps as contracts are negotiated. She did emphasize that all locations they've approached have been "generous" in offering their help. Thomas filmed her last project, "Backwards," in Philadelphia in 2011.

The independent film is part of Broad Street Pictures, a production company Thomas and Reiner developed in 2014 after meeting in a play they starred in together. They engaged in lengthy discussions about the lack of honest female portrayals in films and an equally striking lack of women behind the camera.

Thomas, trotting the Wall Street social circuit (her husband works on Wall Street), realized the startling absence of women in her company. So, making a Wall Street film felt like a perfect fit for the new production company's motivations.

"Wall Street movies in general, in my experience, have tended to portray women in a pretty specific stereotype," Thomas said. "We want more complex female characters in movies, because we see lots of those characters on television, but we want to contribute [to the film space]." 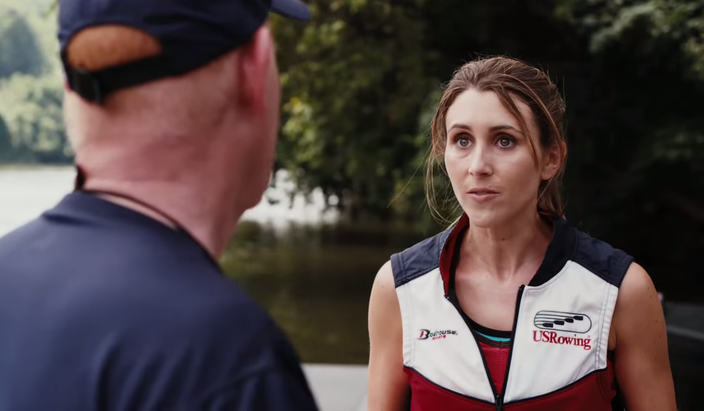 Sarah Megan Thomas (pictured), a Haverford native, produced and starred in the film "Backwards" in 2011 alongside James Van Der Beek. The movie, filmed in Philadelphia, followed a rower adjusting to life after failing to make the Olympics twice. 13th Night Productions / PhillyVoice

The female-driven goal of "Equity" is this: Tell a Wall Street-set story that's not just about women, but by women.

Still, while a major priority of the script is to create "complex" and "flawed" female characters, don't be confused into thinking it will be an all-women cast -- that much might even be naive, admitted Reiner.

"When we were making a Wall Street movie that had these great female characters, we had to create all of these male roles as well, because the truth of Wall Street is that there are more men on Wall Street than women," Reiner told PhillyVoice. "We were creating a realistic world."

That's a world that comes sans the tropes and staples of the Gordon Gekko days of Wall Street films.

“Our story, there’s not strip clubs and cocaine," Thomas said. "It’s a sneak peek at what happens behind closed doors, what happens post-financial crisis, in a world of Facebook. These are all sides of Wall Street we haven’t seen yet, and I think wide audiences do like to go see Wall Street films. That’s part of the appeal to making this movie.”

The film will follow lead heroine Naomi, a workaholic in a male-driven Wall Street world who's passed over for a promotion. Casting has yet to be set in stone for the role.

"Equity" will release next year, timed with the 2016 presidential election -- for obvious reasons, they said. The film, which just nabbed sponsorship from Bloomberg and is funded by private investors (some of whom are women on Wall Street), is shooting for a premiere at the Sundance Film Festival.

Thomas and Reiner will each make an appearance in the film.