The man who ambushed a Philadelphia police officer on Thursday night – firing 13 shots at the patrolman as he walked toward the car – later told investigators his actions were in allegiance with "the Islamic state."

Officer Jesse Hartnett, 33, was in his patrol cruiser at 60th and Spruce Streets, when the suspect rushed the vehicle about 11:40 p.m. Thursday, police said.

Edward Archer, 30, of Yeadon, Delaware County, started firing the weapon – a police-issued 9mm Glock 17 handgun reported stolen in 2013 – on foot and continued shooting as he approached the vehicle.

"He has confessed to committing this cowardly act in the name of Islam," Police Commissioner Richard Ross said during a press conference Friday afternoon.

Harnett, a four-year veteran of the department assigned to the 18th District, was hit three times in the left arm and rushed to Penn Presbyterian Hospital in critical, but stable condition, police said. He managed to dodge 10 other shots in the incident, which Police Commissioner Richard Ross described as an "ambush."

"The bravery he demonstrated was absolutely remarkable," Ross said of Hartnett.

In an interview with police following the shooting, Archer said, "I follow Allah" and "I pledge my allegiance to the Islamic State," Capt. James Clarke, of the city's homicide unit, said during the press conference.

Archer, whose family has a home at 61st and Pine streets, near where the shooting occurred, has admitted to the shooting, Ross said Friday afternoon.

Ross did not say if the incident is linked to a larger conspiracy.

"Even if one exists, we don't know right now," Ross said.

The FBI searched houses connected to Archer in both Yeadon and West Philly.

Investigators were examining Archer's Internet history to see whether he had any contact with any radical Islamic groups, according to Philly.com. The search has not yielded any indication that Archer had such connections, although the authorities were investigating a 2012 trip he took to Egypt. 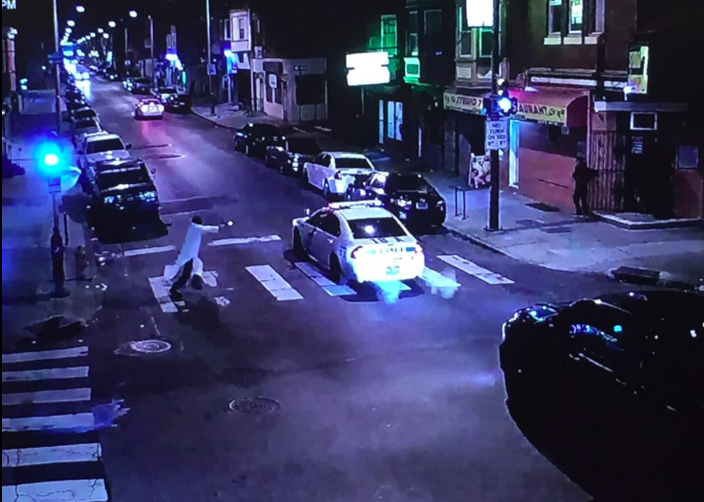 During the attack, Hartnett returned fire at Archer, hitting his assailant at least three times. At Friday's press conference, Ross said Archer was struck in the buttocks.

In a captured recording of Hartnett's radio call for backup, following the shooting, he can be heard shouting into the police radio, "I'm bleeding heavily!"

The suspect ran away but was quickly apprehended by other officers, authorities said.

Ross, who was sworn in as commissioner Tuesday, said there was no apparent motive for the attack.

"Why someone would do something so absolutely evil is just beyond us," Ross said. "It's amazing he's alive."

Ross said Archer had not yet told police what he had been doing the day leading up to the shooting. Police know who the stolen handgun belonged to, but declined to make that information public, he added.

Archer's mother, Valerie Holliday, told The Philadelphia Inquirer he has been hearing voices recently and that family asked him to get help. She also said her son felt targeted by police.

She described him as devout Muslim. Jacob Bender, the executive director of the Philadelphia chapter of the Council on American-Islamic Relations, an advocacy group, said he contacted about five inner-city mosques and found no one who knew of Archer. He said at this point, the motive still appears to be conjecture.

"I think the important point is not to lay the blame for this on the entire Islamic community," he said.

Mayor Jim Kenney complimented the work of the police department in the ongoing investigation and, noted that while Archer may have cited the nation of Islam in his actions, there is no reason to blame Archer's actions on the Muslim faith.

"In no way, shape or form, does anyone in this room believe that Islam, or the teaching of Islam, has anything to do with what you see on that screen," said the city's newly inaugurated mayor. "That is abhorrent. It's just terrible and it does not represent the religion in any way, shape or form or any of its teachings."

During the shooting, Archer called out to Hartnett before he began to open fire, and as Archer unloaded the clip of his handgun, he walked toward the car, eventually thrusting the gun into the police cruiser, Ross said.

Police have released images taken from surveillance cameras near the incident.

Hartnett reportedly was awake and alert prior to surgery at Penn Presbyterian. Ross said both the officer and Archer are in stable condition.

The officer's father, Robert Hartnett, said his son was in good spirits.

Hartnett served in the Coast Guard and has been on the Philadelphia force for four years. He always wanted to be a police officer, his father said.

Archer accepted a plea deal last year in Philadelphia Municipal Court for simple assault and carrying a firearm without a license in an incident that occurred in 2013. He was sentenced to 9 to 23 months in prison and two years of probation.

In November, Archer was convicted in Delaware County of fraud, forgery, driving with a suspended license, accidents involving damage and related charges for an incident that occurred in 2014. He has a sentencing hearing scheduled for Tuesday.

We are grateful for the outpouring of support for our brave officer,Jesse Hartnett.Please keep him in your thoughts & prayers as he recovers

An investigation is underway and updates will be provided as the story develops.