Friday's sunrise was a majestic and eerie scene 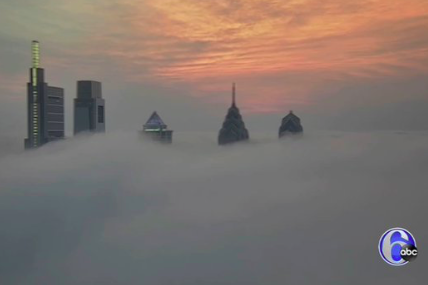 Center City's skyscrapers were swept up in a rolling fog on Friday morning that made for a beautiful sunrise. The skyline looked like something out of "Gulliver's Travels" or the Cloud City from "Star Wars."

Videos and photos of the sunrise were captured by 6ABC's Chopper 6 and some residents who were lucky enough to get a close-up view.

Nice depiction of fog across Philadelphia this morning in a photo by @karenrogers6abc of the Philly Skyline. The Comcast Tower on the left is 1,121 feet tall. Not a bad forecast by the ARW on the right! #PAwx #NJwx #PhillyWx pic.twitter.com/XyuJDVEclk

Looking down from high atop the Comcast Center at a sea of THICK FOG! @NBCPhiladelphia
@Telemundo62
@comcast pic.twitter.com/eoy04MChud

What an amazing shot of the skyline. You can clearly see the fog that is reducing visibility to near zero in some spots this morning. You can also see the sun rising. We'll see some sun mixing with the clouds today. @6abc pic.twitter.com/TqZ1F18GeG

From the ground, others observed dense fog and gave drivers a heads up to be careful.

@MPetersonWx @jimdonovancbs3 the fog in thick in N.E Philadelphia, pa. 19115 just got back from @Wawa 😊 #BeSafe pic.twitter.com/50sJ377tq7

With visibility reduced to zero in some parts of the city, the National Weather Service issued a dense fog advisory that ended at 10 a.m.

Areas of fog have developed across the region and should persist through mid morning. If you are driving this morning, please exercise caution for rapidly changing visibility. #mdwx #pawx #dewx #njwx pic.twitter.com/d6ZgzqlkMF

By Friday afternoon, some of the cloud cover is expected to clear and give way to sunny skies.

Here's a look at the weekend forecast in Philadelphia.

Friday: Partly sunny, with a high near 79 degrees. Calm winds  around 5 mph in the afternoon.

Friday night: A chance of showers, mainly after 3 a.m. Patchy fog between midnight and 3 a.m. Otherwise, mostly cloudy, with a low around 62. South wind around 5 mph becoming calm in the evening. Chance of precipitation is 30%. New precipitation amounts of less than a tenth of an inch possible.

Saturday: A chance of showers. Mostly cloudy, with a high near 76. South wind around 5 mph. Chance of precipitation is 40%. New precipitation amounts of less than a tenth of an inch possible.

Saturday night: Patchy drizzle with a slight chance of showers. Mostly cloudy, with a low around 64. Southeast wind around 5 mph becoming calm in the evening. Chance of precipitation is 20%.

Sunday: Partly sunny, with a high near 81 degrees. South wind around 5 mph.

Sunday night: A slight chance of showers. Mostly cloudy, with a low around 66. Chance of precipitation is 20%.