Philly Touch Tours guides those with low vision through the arts 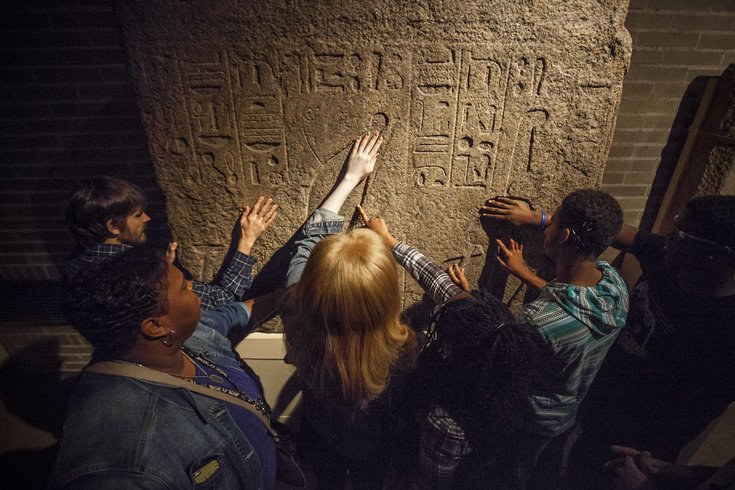 Students with vision loss touch a wall piece from ancient Egypt during a Philly Touch Tour on Wednesday, Nov. 3, 2015.

Inside the Egyptian Gallery of the University of Pennsylvania Museum of Archaeology and Anthropology, a group of high school students from Overbrook School for the Blind crowds the room's 15-ton sphinx. A sighted guide gently takes the hand of a girl curiously feeling around the statue’s front and moves her palm over its paws with the same careful flow of a planchette gliding over a Ouija board.

Her face beams with wonder, and the guide leads into a short lecture about the detailed etchings of the sphinx that make it so unique, some of which, like the statue's ribs, weren't even discovered until those with vision loss were able to feel the typically hands-off statue for themselves.

"We have a saying, and it's, ‘Seeing is believing, but when you touch, you know.’ When you touch these ancient pieces of stone, you know," Seraphin, who has been blind since birth, told PhillyVoice. "It gives you an appreciation and a whole new way to learn." 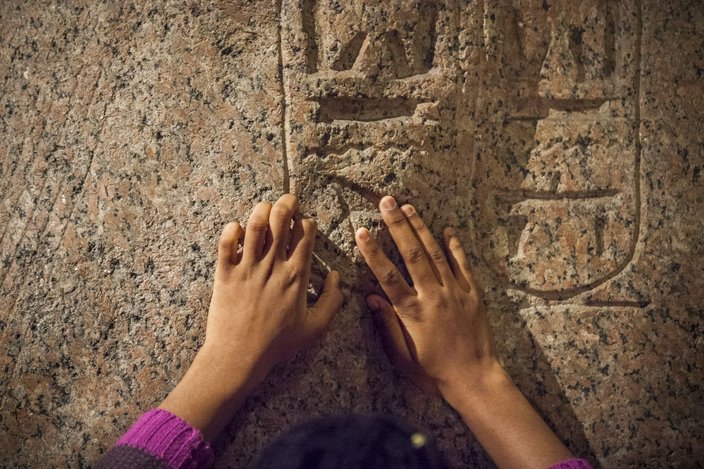 Students touch the markings on the red granite sphinx of Ramesses II during a Touch Tour. (Thom Carroll / PhillyVoice)

Philly Touch Tours, an LLC, officially launched this spring to offer arts and culture tours tailored for those with vision loss, as well as provide workshop services to schools, hospitals and museums in need of accessibility training. It's rooted in a consultant position arts educator Maunder held at Penn Museum from 2012 to late 2014, coordinating special projects -- like the tour through the Egyptian exhibit -- for its galleries. Seraphin said he "serendipitously" met Maunder at an event in July 2013 and jumped on board as a docent before eventually brainstorming the idea to launch a program together independent of Penn Museum.

In short, the "touch tour" outings take groups of about 10 (but sometimes more) people with low vision of any age through locations that range from the seemingly ordinary - like the shops of the Italian Market - to the historic buildings that tell the tale of William Penn and the awe-inspiring Egyptian Gallery. On that tour, high-school-age participants get to do what even museum workers don't: touch objects that are thousands of years old with their bare hands.

"I try and do as many hands-on things as I can, but there's nothing like this experience of having the kids touch all these old objects," Joan Whartnaby, a world history teacher from Overbrook School for the Blind, told PhillyVoice.

Museums, Maunder said, have only recently started offering the sorts of accessibility programs that allow minority groups to get involved. In some of her past experiences, she said, museums maintained a degree of ignorance of what it meant to be accessible -- a lack of recognition that, by today's standards, means more than installing a wheelchair ramp.

“[I'd go to] meetings that would be about accessibility and I would sit there and say, ‘Just where are the people you’re speaking about?’ And they’d say, ‘We’ll meet with them another time.’ And I’d say, ‘Why? Why aren’t you meeting with them the first time? Wouldn’t they surely know more than you?’ And they’d say, ‘Well, that will come the second time,’" Maunder related.

"I came across that too many times. Stop speaking on behalf of others, and ask other people, ‘What do you think?’" 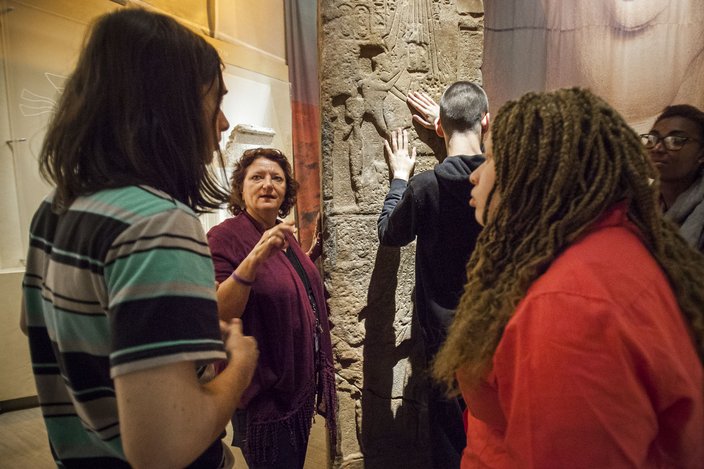 Trish Maunder (second from left), creative director and co-founder of Philly Touch Tours, explains the importance of the monumental wall relief from the reign of Akhenaten to students on a touch tour at Penn Museum. In the background, a student touches hieroglyphics, what Austin Seraphin describes as "like Braille pictures." (Thom Carroll / PhillyVoice)

Maunder's experience working with people with low vision began with her now-29-year-old daughter, who was born blind. She suddenly had to start thinking in a way that was more multi-sensory.

The point being that she began to understand how touch, for example, might provide a sensory experience not inferior to sight, but merely different -- informative for someone who studies art with a perspective skewed by the luxury of seeing. Maunder took that personal experience with her when she created Philly Touch Tours, taking on the motto, "Nothing about us without us." It stresses the importance of constructively gathering feedback from the people who are actually impacted.

"When you're blind, there's nothing more boring than a sightseeing tour," Seraphin said, explaining that he's often left to stand around and wait during tours, rather than participate. "It's an incredible feeling to finally be able to touch in museums. For years, there was nothing for me." 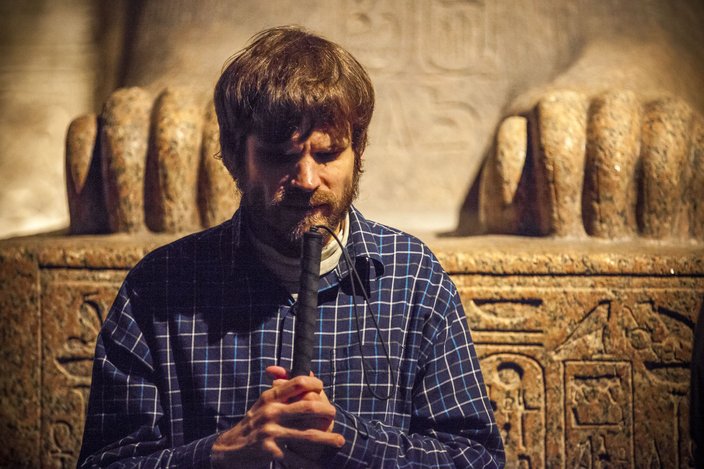 Austin Seraphin, who is blind himself, is the co-founder of Philly Touch Tours. Here, he stands in front of the red granite sphinx of Ramesses II during a Touch Tour at the University of Pennsylvania Museum of Archaeology and Anthropology, Wednesday, Nov. 3, 2015. (Thom Carroll / PhillyVoice)

Because the blind community tends to be fragmented, he said, it's difficult to find activities to participate in as an adult blind person. That's been his primary motivator for spreading the word about the touch tours: bringing a group of people together who don't often have obvious venues to connect, but have so much in common.

"Collaborations and relationships are so powerful between people with these particular groups. There's a lot of camaraderie," Maunder said. "There's a level of empathy and understanding for one another that exists in a stronger way." 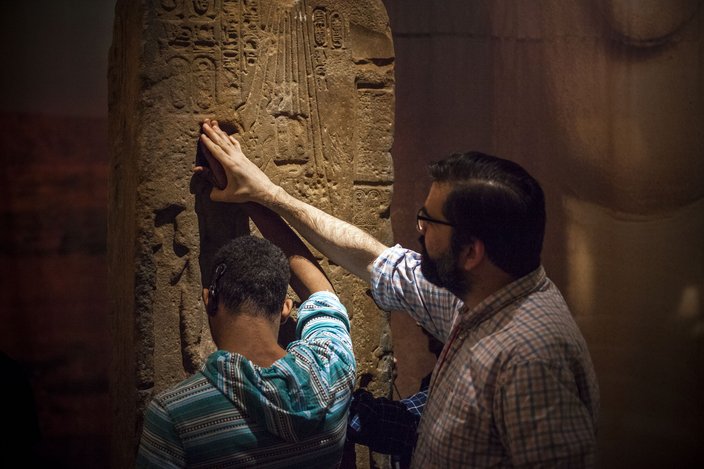 Kevin Schott, guide program manager of the University of Pennsylvania Museum of Archaeology and Anthropology, guides a student's hand over the monumental wall relief from the reign of Akhenaten during a Touch Tour, Wednesday, Nov. 3, 2015. (Thom Carroll / PhillyVoice)

Looking ahead, Philly Touch Tours hopes to create a more robust offering of events. They're also seeking additional partners and, of course, funding.

For now, though, it's more than satisfying enough to simply take in tour groups like the one at the Egyptian Gallery - ones who are constantly teaching them something new.