Remembering WrestleMania XV in Philly with the legendary Blue Meanie 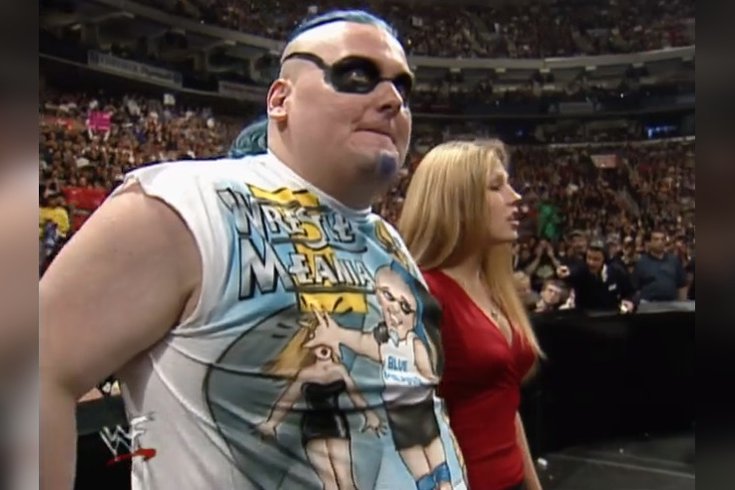 The Blue Meanie at WrestleMania XV.

March 28, 1999 was an epic date in the life of Brian Heffron, better known to the Philly crowd as the Blue Meanie, and his thousands of fans around the world. Just a few months after joining what was then the World Wrestling Federation, Heffron would be booked to make an appearance in the biggest pay-per-view in the wrestling business, WrestleMania, and in his own backyard of Philadelphia at what was then known as the First Union Center.

Growing up in Atlantic City, Heffron attended both WrestleMania IV and WrestleMania V, which took place in the Historic Atlantic City Convention Hall in 1988 and 1989, respectively. After training with Al Snow in Ohio, he’d make his way back East and became a staple of Extreme Championship Wrestling. As ECW grew, talent left for the greener pastures of the World Wrestling Federation and World Championship Wrestling. Heffron would join the former in November 1998, a couple of weeks after the company’s Survivor Series pay-per-view.

“I remember when I first got signed by WWE, the electricity that went through my body,” Heffron said on the Straight Shooters podcast. “As soon as I hung up that phone, [I] was able to go into the next room and tell my folks to put all the bills in my name. When I found out I would be a part of WrestleMania, and it’s in my hometown of Philadelphia in front of my friends and family, there’s a jolt that goes through you.”

Heading into the biggest stage in the wrestling industry, Heffron first had a stop at the WrestleMania Rage Party (we did a deep-dive podcast on it last year, and you can listen to that here), which occurred at the Pennsylvania Convention Center the night before WrestleMania XV.

On the podcast, Heffron talked about his scene that was cut from the event.

“I was slated to be on that Rage Party,” Heffron explained. “This is how competitive WWE was at the time, especially dealing with live TV. You could be slated to be on the show, and the last second they go, ‘Okay, your segment’s cut.’”

“There was a moment where me, Goldust, and Ryan Shamrock were in the middle of the floor at the Rage Party with a camera crew and everything, and we’re waiting to come back from a commercial, and the fans are watching us and I’m standing there waiting to go into Meanie Mode. I was supposed to do sort of like a lap dance for Goldust to win his attention over Ryan Shamrock. Ryan was going to be playing with his hair and massaging him and I was supposed to dance like I’m trying to win his affection … then the producer goes, ‘The segment got cut.’”

A segment like that would’ve fit right in with the product at the time, especially during an event called the WrestleMania Rage Party. However, even though it likely was tape delayed, only one hour of the event was shown nationally on the USA Network. If I remember correctly, since I taped it, it was on from 9 p.m. to 10 p.m. or 10 p.m. to 11 p.m. The event was pretty much an all-day/all-night thing, so there probably were more scenes that got cut from airing.

So, how exactly did Heffron find himself on the WrestleMania XV card in his hometown? It all started with a storyline between Goldust and Al Snow, who was carrying around a mannequin head that he would talk to — and apparently it would talk back to him. Goldust had stolen the head, so Heffron approached the head creative writer at the time, Vince Russo, and pitched an idea that would re-introduce a character he previously debuted in ECW.

“I go up to Vince Russo and pitch, ‘Hey, Goldust stole Al Snow’s head. I’m with Al Snow and the J.O.B. Squad. In ECW, I was Bluedust. Now Goldust is a character that plays the mind games … what if I brought back Bluedust and play mind games with the guy who plays mind games in order to get Al Snow’s head back?’,” Heffron said. “I watched him process it and he starts chewing his gum and he’s like, ‘Yeah, bro, yeah. Yeah, you’re gonna do it.’”

After Bluedust and Goldust had a match at the St. Valentine’s Day Massacre in February 1999 (we also did a deep dive on that right here), the two would become joined at the hip along with Ryan Shamrock, who was playing the role of Ken Shamrock’s sister. By WrestleMania night, the awkward trio would have their WrestleMania moment in a Four Corners match for the Intercontinental Championship against champion Road Dogg, Val Venis, and Ken Shamrock.

According to Heffron, his goal was to be noticed in the match but also not to be highlighted in a way that takes attention away from the performers in the ring. There’s a very fine art to that in professional wrestling, and there’s been many times where situations like this have moved the spotlight from inside the ring to outside the ring when it wasn’t supposed to.

“Just say my name. Say my name,” Heffron said, noting he would run to the announcers' table just to make a face so Jerry Lawler would mention him on the air, calling him an idiot. Heffron said that backstage after the match, it felt just like a normal day.

"You kind of digest what just happened and get with all the parties involved and say 'thank you' and go over what we just did ... We talked about the match for a minute or two and kinda just went our own ways."

After it all, Heffron understands the opportunity he was given and delivered as best as he possibly could on the biggest wrestling stage in the world.

“I think about all the opportunities I’ve had and the other people who would kill to be in that moment, and it makes you appreciate the opportunity to have a storybook moment in your career,” Heffron added. “I debuted for ECW in Philly … my WrestleMania moment’s in Philly. The only thing that would’ve topped it off is if I could’ve came back to the [Royal] Rumble in Philly.”

Heffron also talks about sneaking into a Holyfield-Foreman fight, his WrestleMania payoff, his relationship with Al Snow, the Phantoms game that he, Al Snow’s family, Paul Bearer, and the Headbangers went to that Friday night, the Brawl For All, the Philly crowd paying their respects to Gorilla Monsoon with a standing ovation, and so much more!