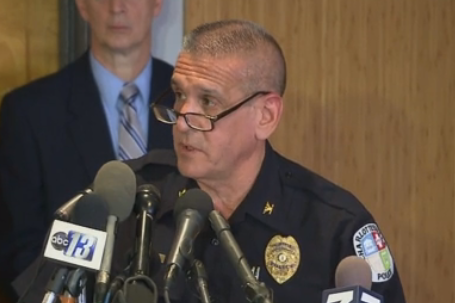 Charlottesville Police Chief Tim Longo addresses the media following the department's investigation that concluded there was no "substantive basis" for the story about the alleged rape of a UVA student that appeared in Rolling Stone Magazine.

A police investigation has found no evidence to back up a discredited Rolling Stone magazine story about a gang rape at a University of Virginia fraternity, officials said on Monday.

Rolling Stone reported in November about an alleged Sept. 28, 2012, attack on a woman at a Phi Kappa Psi fraternity house pledge party and the university's failure to respond to it. The magazine backtracked on its story in December, citing "discrepancies" in the accuser's account.

Charlottesville Police Chief Timothy Longo said an investigation had been unable to corroborate the magazine's story of the assault on Jackie, the student identified in the article by her real first name.

"I'm not in a position where I can say, based on all the evidence we've developed, something terrible didn't happen to that young lady that night," he told a televised news conference.

"All I can tell you is, there is no substantive basis for what is described in that article happened that night."

He said the investigation was suspended, not closed.

The article by reporter Sabrina Rubin Erdely provoked an uproar at the school, the flagship of the state university system, and renewed concerns about campus sexual assault. The university shut down fraternity and sorority activities for the rest of the semester and enacted more safety measures.

Longo outlined several inconsistencies in the Rolling Stone story, including no proof a party had taken place at Phi Kappa Psi that night. A time-stamped photo of the building's entrance hall showed no sign of a social gathering, he said.

Investigators were unable to find Jackie's alleged date at the party, with whom she said she worked at the university pool, and another pool co-worker, the chief said.

After the Rolling Stone article came out, Jackie met with Charlottesville police accompanied by a lawyer and a university representative. She declined to give a statement or answer questions, Longo said.

Rolling Stone has commissioned an audit of its story by the Columbia University School of Journalism. Pulitzer Prize-winning author Steve Coll is heading the review.

In a statement, Rolling Stone said it expected the audit shortly and would publish it in a couple of weeks.

"The report will provide a thorough analysis of the editorial process surrounding this piece and Rolling Stone has cooperated with Steve Coll extensively,” it said.