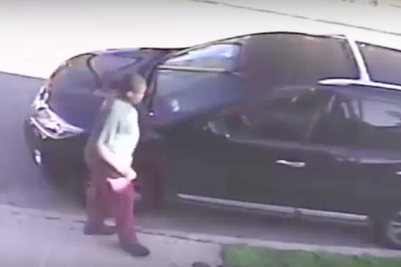 Police seek teen suspect who vandalized cars in Northeast Philadelphia on May 14, 2016.

Philadelphia police are seeking help from the public to identify and locate a teenager who allegedly vandalized several vehicles in Northeast Philadelphia.

According to authorities, surveillance video from the 8000 block of Erdrick Street shows the suspect scratch a vehicle before fleeing the scene at around 7:50 a.m. on May 14. Police say a total of nine cars were vandalized.

The suspect is described as a black male between 12 and 15 years old. He was last seen wearing a green T-shirt with the number 13 on the back, red pants, and brown or black shoes.

Anyone with information on this incident or the suspect is asked to contact the Northeast Detective Division at 215-686-3153/3154.