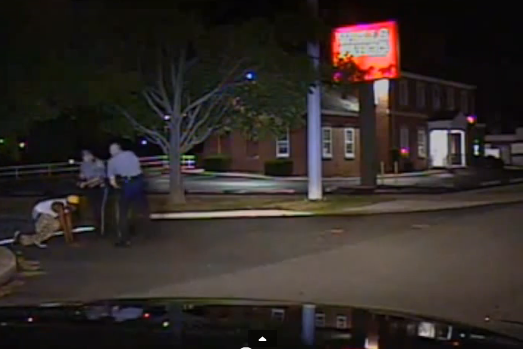 A dash cam video of a Dover police officer kicking a suspect has been made public after a judge's ruling.

Police in Delaware have released video from a 2013 incident showing a black suspect being kicked in the face by a white officer who has been charged with assault.

The dash cam video was released by the Dover Police Department on Thursday after a federal judge ruled the images it contains are no longer confidential.  The video, which contains raw language, has been posted on YouTube and can be seen here.

The video was released three days after Dover Police Officer Corporal Thomas Webster was arrested on a charge of felony assault for kicking Lateef Dickerson as he kneeled to the ground during his arrest near a Dover gas station, police said.

Dickerson suffered a broken jaw and was knocked unconscious, police said in a statement.

Webster encountered Dickerson during a call to break up a fight, police said.

"Webster, along with another officer, had the subject at gun point, giving him verbal commands to get on the ground to which the subject eventually complied," the statement said.

"As the subject was in the process of getting on the ground he was kicked in the head once by Webster rendering him unconscious," it said.

A previous grand jury declined to indict Webster on criminal charges and the U.S. Attorney's Office in 2014 found no violation of Dickerson's civil rights.

The American Civil Liberties Union sued Dover police on Dickerson's behalf and lobbied for the release of the video.

Fred Calhoun, president of the Delaware's police union, the Fraternal Order of Police, said the criminal charges against the officer were politically motivated, the News Journal newspaper reported on Thursday.

"It's not fair. This was done because of what is taking place in society today," Calhoun said.

Webster's attorney said he will plead not guilty to the assault charge. He is free on $5,000 bond, authorities said.