After long day of fundraising in California, President Obama reportedly had a private dinner with movie star 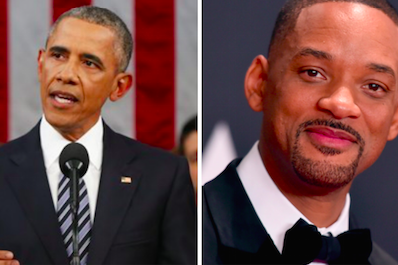 President Barack Obama (R) delivers his State of the Union address before a joint session of Congress on Capitol Hill in Washington, Tuesday, Jan. 12, 2016. Will Smith (L) arrives at the Governors Awards at the Dolby Ballroom in Los Angeles on Nov. 14, 2015.

In the lead-up to the release of Will Smith's controversial football biopic 'Concussion,' the Philadelphia native opened up about his interest in a pursuing a political career. On Thursday, Smith had a chance to sit down for a private dinner in Los Angeles with the man who holds the world's highest political office.

According to multiple reports, President Obama joined Smith, DreamWorks CEO Jeffrey Katzenberg and Walt Disney Studios chairman Alan Horn for a meal following a busy day on the campaign trail. On Thursday, Obama attended four Democratic fundraising events in California and attended a taping of "The Ellen Degeneres Show," according to Politico.

Back in November, Smith spoke critically about Donald Trump's immigration proposals and said the current climate of American politics may compel him to run for office.

"If people keep saying all the crazy kind of stuff they’ve been saying on the news lately about walls and Muslims, they’re going to force me into the political arena,” Smith said during an appearance on Hollywood Reporter's "Awards Chatter" podcast. ""As I look at the political landscape, I think that there might be a future out there for me. They might need me out there. This is the first year that I've been incensed to a level that I can't sleep, you know? So I'm feeling that at some point, in the near future, I will have to lend my voice to the conversation in a somewhat different way."

The dinner on Thursday was not disclosed by the White House and deputy press secretary Eric Schultz would not respond to questions about the meeting.

Katzenberg and Horn are both well-known Obama supporters and megadonors, having held L.A. fundraisers both during his 2012 presidential campaign and later in 2014 to raise money for Democrats.

Smith, whose most recognized title remains "The Fresh Prince of Bel-Air," said in November that if he were to make a foray into politics, he would shoot for the stars.

"I mean, I gotta be the president, you know,” Smith said. “Come on. Really? Keep it real. What else would I run for?”