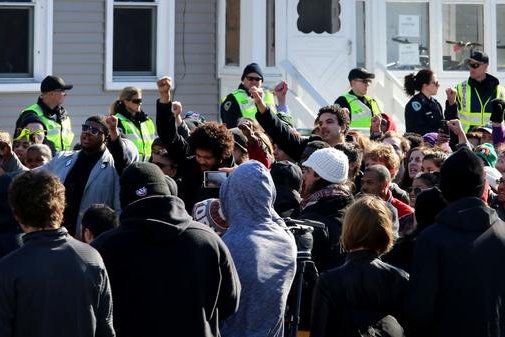 Demonstrators march in Wisconsin in protest of the police shooting of 18-year-old Tony Robinson on March 7, 2015.

MADISON, Wis. - Activists plan more protests in Madison, Wisconsin, this week after the fatal shooting of an unarmed black teenager by a white policeman, the latest in a string of killings that highlighted concerns of racial bias in U.S. law enforcement.
Tony Robinson Jr., 19, was shot in Wisconsin's capital on Friday evening after Officer Matt Kenny responded to calls reporting a man was dodging cars in traffic and had battered another person, Police Chief Mike Koval said.
Kenny, 45, followed the suspect into an apartment, where he was struck in the head, according to Koval. The officer then shot the unarmed teen, who died later in hospital.
Demonstrators marched on Saturday evening from the Capitol building to the neighborhood where Robinson was shot, carrying a banner reading "Black Lives Matter" and signs that read "Justice 4 Tony."
The community group called Young, Black and Gifted plans a demonstration on Wednesday afternoon at the Wisconsin Department of Corrections building in Madison, according to the group's Facebook page.
"There's no doubt about the fact that we have to be clear about this. I want to be very transparent: He was unarmed," Koval said at a news conference on Saturday.
Last year, the deaths of unarmed black men in Ferguson, Missouri, and New York City triggered a nationwide wave of demonstrations against the use of excessive force by law enforcement.
Kenny is on paid administrative leave while the Wisconsin Department of Justice conducts an investigation instead of local authorities, as mandated under a law enacted in 2004.
In a statement on the city's website, Madison Mayor Paul Soglin called the shooting "a tragedy beyond description" and said the city will be "open and transparent" in communicating results of an investigation into the shooting.
He noted that the incident occurred on the same weekend as the 50th anniversary of "Bloody Sunday" march in Selma, Alabama,  a turning point in the U.S. civil rights movement. Kenny, a 12-year veteran of the Madison Police Department, was exonerated in a police shooting in 2007 and even earned a commendation in the incident, Koval said.
"The circumstances of that case were concluded to be a suicide-by-cop sort of predilection," Koval said.
According to media reports, a 48-year-old man in that instance was shot to death after he pointed a gun at officers and refused to drop his weapon. The weapon was later determined to be a replica of a .38-caliber handgun.
Wisconsin court records show that Robinson pleaded guilty to armed robbery last year and received a probated six-month sentence.
Koval declined to comment on Robinson's record.
"I'm not here to do a character workup on someone who lost his life less than 24 hours ago," he said.