The former Pennsylvania health secretary will have a more visible influence on U.S. public policy 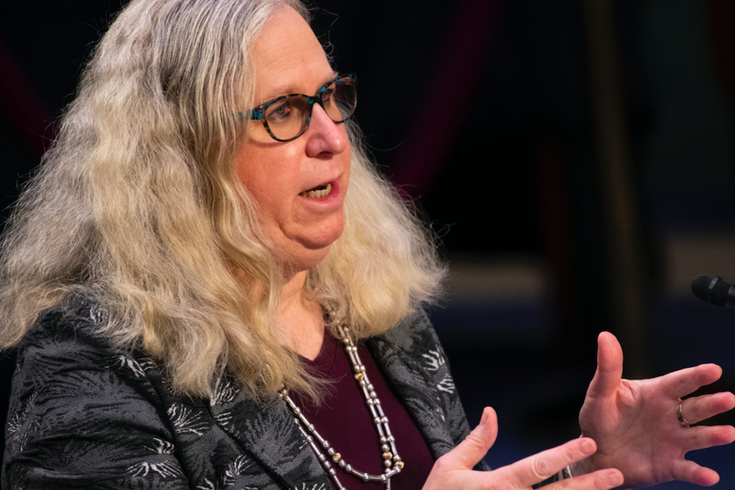 Dr. Rachel Levine, Pennsylvania's former health secretary, shown above in February, was sworn in as a four-star admiral with the U.S. Public Health Service Commissioned Corps on Tuesday.

U.S. Assistant Secretary for Health Dr. Rachel Levine has become the nation's first transgender person to be sworn in as a four-star admiral. She now joins the ranks of the U.S. Public Health Service Commissioned Corps, a force of 6,000 uniformed officers who respond to health crises and national disasters.

Levine, 63, who formerly served as Pennsylvania's health secretary under Gov. Tom Wolf, also is the first female officer to serve as a four-star admiral in the corps.

"This is a momentous occasion and I am honored to take this role for the impact that I can make — and for the historic nature of what it symbolizes," Levine said Tuesday. "I stand on the shoulders of those LGBTQ+ individuals who came before me, both those known and unknown."

Levine — who plans to regularly wear the blue uniform of the corps — delivered remarks after being sworn in.

“May this appointment today be the first of many more to come,” the new admiral said. “Diversity makes us stronger.” pic.twitter.com/JepXrOcFZH

GLAAD, a worldwide advocate for LGBTQ acceptance, congratulated Levine for the historic accomplishment.

The Commissioned Corps, led by the U.S. Surgeon General, is one eight uniformed services in the United States. Along with the National Oceanic and Atmospheric Administration Commissioned Officer Corps, the public health corps is separate from the military branches but plays a critical role in responding to crises such as the coronavirus pandemic.

Levine has risen quickly in the Biden administration since being confirmed to her post in the Department of Health and Human Services in March. She then became the highest-ranking openly transgender federal official in U.S. history. Wolf congratulated her in a tweet on Tuesday.

Congratulations to @HHS_ASH Dr. Rachel Levine on this well-deserved honor.

I was proud to serve Pennsylvanians alongside Dr. Levine, and I’m proud of all the work she’s doing now to protect public health across the nation.https://t.co/m0JSJ0ZufZ

But Levine's career as a public official also has been met with fierce backlash and ridicule at every step up the ladder, primarily from conservative groups who have painted her advancement as a political gesture.

Presidential appointees often receive high-ranking roles in the corps, including Levine's predecessor, Brett Giroir, the Trump administration's assistant health secretary who was sworn in as an admiral after his Senate confirmation in 2018.

In Pennsylvania, Levine was frequently the target of hateful and transphobic attacks during her time as health secretary. She was vigorously defended by Wolf, who called on state residents to stand up against transphobia.

Levine dismissed the anticipated backlash to her new status with the corps, praising Biden for his commitment to diversity and inclusion.

"The time is now for our country to continue to move the bar forward for diversity," Levine said. "And I am proud to wear this uniform and answer that call."

In joining the federal health corps as a leading figure, Levine will play an active role in shaping a division that has received little visibility as it operates under HHS. In addition to its response to the pandemic and major hurricanes over the years, the corps prominently works with medically underserved populations including American Indians and Alaska Natives, and has had a growing role in shaping national policy around mental health.