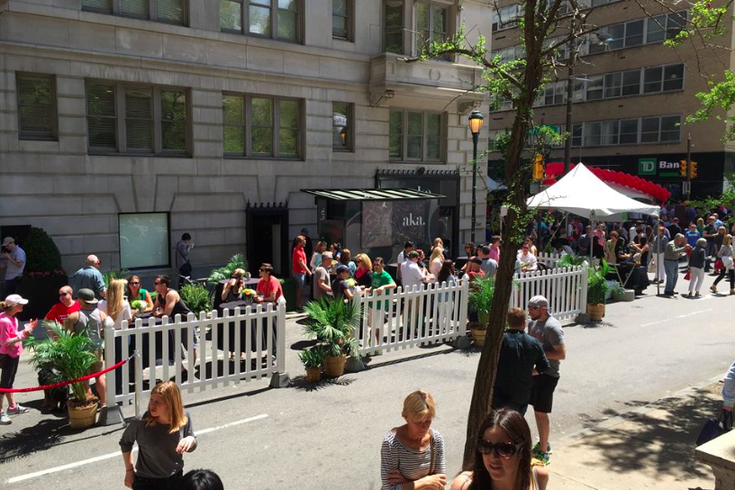 The number of dining establishments with outdoor seating in Philadelphia has proliferated over the past 15 years, increasing by an incredible 439 percent since 2001, according to a new report from the Center City District.

The CCD says there are now 372 eateries located between Vine and South streets and from river to river. Combined, they offer a total of 5,579 seats to Philly residents, suburban visitors and tourists. The number jumps to 431 after other outdoor seating venues — nail salons, park plazas and pop-up events — are factored into the running count.

Since the 1990s, the rise of these new establishments — restaurants, cafes, bakeries, ice cream parlors, etc.— has brought new life and character to the city's sidewalks. Here's a map of the distribution of these businesses in 2016. 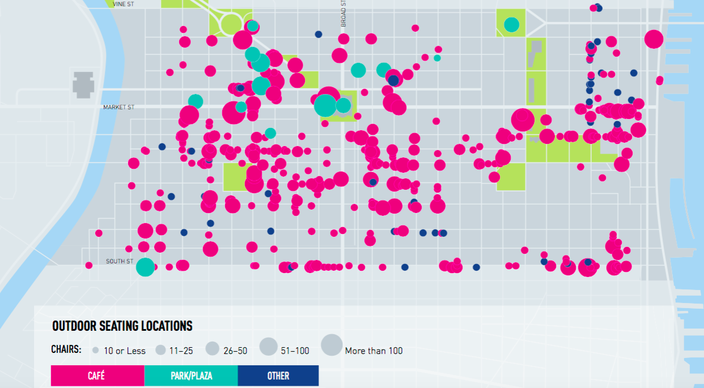 2106 map of Center City businesses with outdoor seating by type.

The upward trajectory was set in motion by a 1995 executive order from former Mayor Ed Rendell, who authorized sidewalk cafes in the area of Rittenhouse Square. As Center City's downtown population and tourism numbers rose, other neighborhoods and business types followed from there, creating a diverse mix of offerings for street services in nice weather conditions.

Philadelphia averages about 207 sunny days per year, roughly the U.S. average, and was ranked 52 out of 100 in Wallethub's city climate analysis, behind about 100 + tied paradises in California. Philly tied with Mission and Pharr, Texas; Springfield and Peoria, Illinois; Savannah, Georgia; and Montgomery, Alabama.

After two straight years of growth averaging 4.5 percent, Center City will soon see another rise in outdoor seating venues to go along with major developments on East Market Street.

"The map of seating locations shows just two locations on East Market Street between City Hall and Independence Mall," the report notes. "However, that is soon to be filled by two major, mixed-use projects with ambitious pedestrian-oriented redevelopment plans."

The projects include the PREIT/Macerich redevelopment of The Gallery as The Fashion Outlets of Philadelphia (expected to be completed in 2018) and National Real Estate Development's mixed-use East Market, which recently revealed plans for a second residential tower that will bring a combined total of 562 units to the busy corridor.