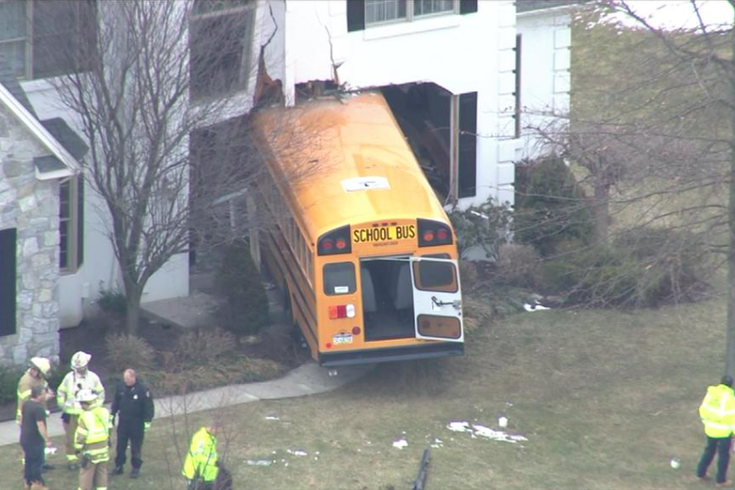 A school bus crashed into a home in Blue Bell on Tuesday morning.

A school bus carrying nine elementary school students careened off the road and crashed into a occupied home in suburban Philadelphia home on Tuesday, and no injuries were reported, police said.

Neither the students, the driver nor a resident who was on the home's second floor at the time of the 7:45 a.m. crash were injured, Whitpain Township Police said in a press release.

A photograph of the scene showed a yellow school bus piercing the first-floor window of a white plaster home in Blue Bell, Pennsylvania, 20 miles northwest of Philadelphia. The rear of the bus remained in the home's front lawn, and its back emergency exit door was open.

"All nine students and the driver were able to exit the bus through the rear emergency door and all were uninjured," police said in the release.

The bus driver, a 58-year-old man whose name was not released and who was employed by the First Student transportation company, was taken to Abington Hospital for evaluation, police said.

The students, who attend Saint Helena School, a parochial elementary school, were transported school and their parents were notified.

The crash was under investigation by Whitpain Township Traffic Division.