The secret science behind chocolate's sensuality

By Meeri Kim
PhillyVoice Contributor
The Science of Everything Chocolate 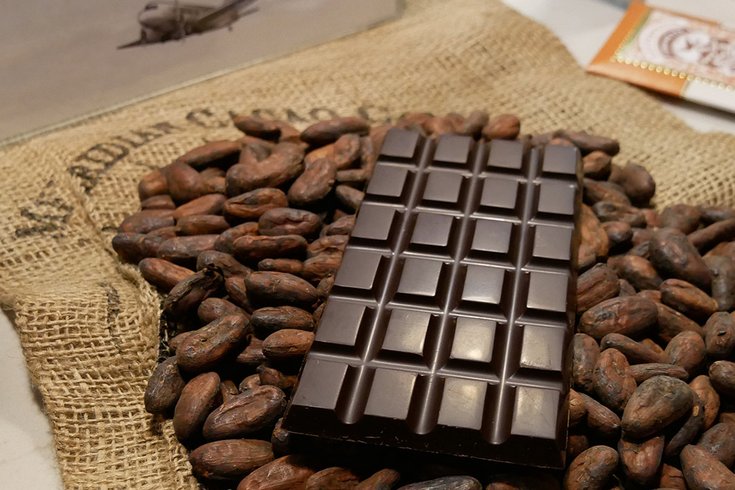 “We are chocolate makers, not chocolatiers. What that means is, rather than starting with big blocks of chocolate that we melt down and turn into truffles, we actually start with raw cacao beans, roast them, and do the entire process ourselves from bean to bar,” said David Menkes, owner of LetterPress Chocolate in Los Angeles. He and his wife started the business in their apartment.

More than 250 years ago, a Swedish botanist who grew up memorizing long-winded, complex plant names came up with a better way to classify living things. Considered the “Father of Taxonomy,” Carl Linnaeus invented binomial nomenclature — the two-word naming system we still use today that pegs humans as Homo sapiens, which is Latin for “wise man.”

He named more than 12,000 species of plants and animals, but only one truly had the honor of being dubbed “food of the gods” in Greek: Theobroma cacao, the evergreen tree used to make chocolate.

For most of the Western world, chocolate is consumed for the purpose of pleasure and indulgence. Whether you're snapping off a piece of a quality 85 percent cocoa bar, savoring bites of a warm molten cake, or letting a truffle melt in your mouth — eating chocolate remains a sensual and not cerebral experience.

But scientific scrutiny does have its place in the world of chocolate. Thousands of scientific publications investigate the substance from all angles: How does cocoa origin affect the eventual taste? Which post-harvest treatments create better flavors? What makes certain people love and crave chocolate more than others?

To start with, chocolate has fascinating material properties. An instructor at Johns Hopkins University's engineering school even uses chocolate to teach her students about key concepts in materials science, such as crystallization. Cocoa butter, the vegetable fat extracted from the cocoa bean, has six known types of crystal structure. These different crystalline forms, called polymorphs, have different melting temperatures and textures that can make or break a chocolate-savoring experience.

“Bean-to-bar has seen growth as people begin to learn about the value in cacao and dark chocolate, and the desire for quality dark chocolate has been increasing exponentially in the last 10 years.” – Lee Scott Theisen, chocolate expert

In fact, only one configuration of molecules — called Form V — is acceptable for gourmet chocolate. Form V gives the finished product a glossy finish, satisfying snap, and melt-in-your-mouth smoothness. Forms I through IV cause it to melt easily at room temperature, while Form VI chocolate has a grainy texture and dull appearance.

Manufacturers achieve the coveted Form V through tempering, a complex process that involves carefully melting, stirring, and cooling the chocolate. Tempering is one of the last stages of chocolate making, each of which has a significant effect on flavor, texture and appearance.

With the rise of bean-to-bar manufacturers processing cocoa beans in-house, technical questions about roasting methods, cocoa bean origins, tempering, and other variables matter more than ever.

“We are chocolate makers, not chocolatiers. What that means is, rather than starting with big blocks of chocolate that we melt down and turn into truffles, we actually start with raw cacao beans, roast them, and do the entire process ourselves from bean to bar,” said David Menkes, owner of LetterPress Chocolate in Los Angeles.

These chocolate makers often get started by experimenting in makeshift labs within their own homes. For instance, LetterPress consists of only two people: Menkes, a former DreamWorks animator, and his wife Corey. They began making chocolate out of their apartment in 2014 until their landlord forced them to move the operation elsewhere. 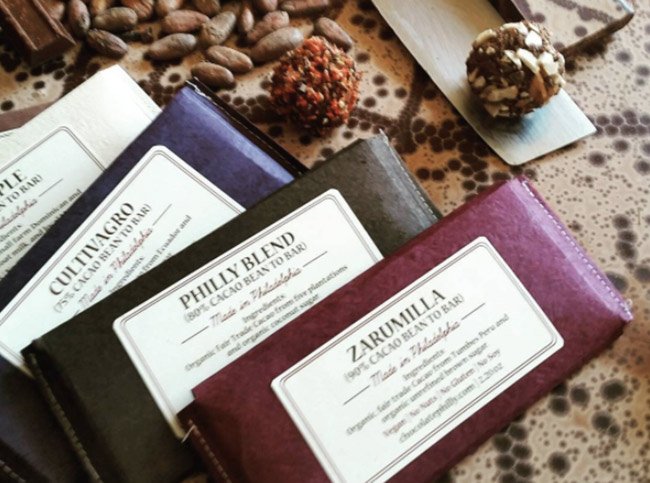 Robert Campbell, known as the “Chocolate Alchemist,” makes the only bean-to-bar chocolate in Philadelphia. Among the offerings: Zarumilla, 90 percent dark chocolate made with cacao from Peru and sweetened with unrefined panela sugar from Colombia, and Philly Blend, an 80 percent blend of cacao from five different regions and sweetened with coconut sugar.

'I DO EVERYTHING BY HAND'

“I’ve been messing around with chocolate since my wife and I opened up our restaurant 12 years ago, and I started doing bean-to-cup with drinking chocolate,” said Robert Campbell, co-owner of Sazon Restaurant & Cafe in Northern Liberties. “Then I released my first bean-to-bar to the public two years ago. I do everything by hand, from scratch.”

His creative takes on drinking chocolate — made with offbeat ingredients like goji berries, habanero pepper, and curry — have delighted Philadelphians for years. But in order to garner national attention, Campbell decided to capitalize on the current bean-to-bar rush and sell chocolate bars online. At the moment, the self-proclaimed “Chocolate Alchemist” is the only known bean-to-bar manufacturer in the Philadelphia area.

Philadelphia chocolate maker Robert Campbell prefers blends of beans in his bars instead of single origin cacao. Using a proportion of each type balances the overall flavor profile.

But he will likely be fending off local competitors soon enough, as chocolate making surges in popularity across the country.

“Bean-to-bar has seen growth as people begin to learn about the value in cacao and dark chocolate, and the desire for quality dark chocolate has been increasing exponentially in the last 10 years,” said Lee Scott Theisen, a lecturer at the Osher Lifelong Learning Institute of the University of California, Los Angeles who teaches a course called “How Chocolate Conquered the World.” He estimates that out of 270 bean-to-bar makers in the world, close to 100 are based in the United States alone.

As with wine and coffee, Theisen says the concept of “terroir” — meaning the influence of a crop's environment on flavor — matters for chocolate. With all other variables staying the same, cacao beans harvested from a tree in Kona will result in a different bar than one made from a tree in Hilo — even though both come from the Big Island in Hawaii.

Campbell prefers blends of beans in his bars as opposed to using single origin cacao, using a proportion of each type to balance the overall flavor profile. But the main reason he loves chocolate is for his health. While chocolate has been shown to have some beneficial effects on cardiovascular disease risk, he swears by the long-lasting energy boost it provides him as a lifelong endurance athlete.

“I always was looking for something that would give me more energy and endurance — I tried ginseng, guarana, honey, Red Bull — nothing has worked better than raw cacao or high percentage dark chocolate mixed with berries,” Campbell said.