Amid scandal, Sepp Blatter says he will resign as FIFA president 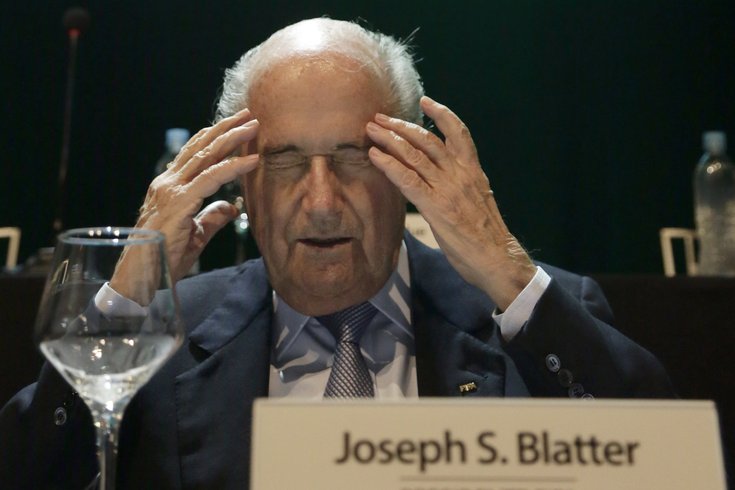 FIFA President Sepp Blatter will resign from soccer's governing body amid a widening corruption scandal and promised Tuesday to call for fresh elections to choose a successor.

The 79-year-old Blatter was re-elected to a fifth term on Friday, two days after a corruption crisis erupted and seven soccer officials were arrested in Zurich ahead of the FIFA congress.

"This mandate does not seem to be supported by everybody in the world of football," Blatter said Tuesday at a hastily arranged news conference in Zurich. "FIFA needs a profound restructuring."

Elections are expected to take place sometime between December and March.

"I will continue to exercise my function (until the new election)," said Blatter, who looked strained and serious while reading a statement in French before walking off without taking questions.

Three days earlier, Blatter was defiant and feisty in the same room when fending off questions about FIFA's battered reputation and the chance U.S. federal agencies could seek his arrest.

The U.S. Department of Justice indicted 14 men last Wednesday, including the seven arrested in dawn raids on a luxury Zurich hotel.

The Justice Department said Tuesday it would have no comment on Blatter's announcement. The Swiss attorney general said Blatter was not under investigation in Switzerland, but authorities said last week they have opened a criminal probe into the 2018 and 2022 World Cup bidding votes.

Blatter's decision to stand down came four days after he defeated sole challenger Prince Ali of Jordan 133-73 in the FIFA presidential election for what would have been another four-year term. He has been in office for 17 years.

Michel Platini, the president of European body UEFA, had called for Blatter's resignation last week before the vote. On Tuesday, he praised Blatter's decision to go.

"It was a difficult decision, a brave decision, and the right decision," said Platini, Blatter's one-time protege.

Platini opted out of taking on Blatter head-to-head in last week's election, but the former France great is a likely candidate for the next vote.

Blatter said he reached the decision after he had "thoroughly considered my presidency and ... the last 40 years in my life."

Blatter joined FIFA in 1975 as technical director for development projects, was promoted to general secretary in 1981 and spent 17 years as right-hand man to Joao Havelange of Brazil before being elected to lead world soccer.

A final few months in office promise to deliver the modernizing reforms Blatter promised in 2011 during a previous corruption crisis but fell short of expectations.

"Since I shall not be a candidate, and am therefore now free from the constraints that elections inevitably impose, I shall be able to focus on driving far-reaching, fundamental reforms that transcend our previous efforts," Blatter said.

Term limits for his successor and members of the executive committee; a smaller executive panel elected by all FIFA member federations and not just by continent; and tougher integrity checks for candidates done centrally from Zurich are among changes that could be put into place.

Blatter again directed blame at his executive committee colleagues who have repeatedly been implicated in bribery and corruption.

"The executive committee includes representatives of confederations over whom we have no control, but for whose actions FIFA is held responsible," he said.

The new election will be overseen by Domenico Scala, chairman of FIFA's audit and compliance committee.

Scala gave a statement immediately after Blatter in which he praised a decision that was "difficult and courageous in the current circumstances."

"This is the most responsible way to ensure an orderly transition," Scala said. "There is significant work to be done to regain the trust of the public."