"There are kids getting broken bones – one girl lost vision in one eye," SEPTA police chief says

At 3 p.m. on a school day in Philadelphia, it might as well be high noon.

At least that's how it seems to SEPTA police Chief Thomas Nestel.

Nearly every day, his officers have to deal with violent confrontations between students at SEPTA stops and stations throughout the city. Some victims are suffering serious injuries.

"We've been struggling with student-on-student violence for months," he told PhillyVoice on Tuesday.

According to Nestel, SEPTA officers have been working closely with the city's police force on the problem for at least a year.

And while two recent incidents have involved attacks on students from Roman Catholic High School in Center City, Nestel said that no one school, or specific school rivalry, is to blame for the uptick in student violence.

Instead, he said, students "come from all over the city" and gather at SEPTA stations, notably the Frankford and Olney Transportation Centers and the transportation corridor at 15th Street in Center City.

"It's social media-driven and it's spontaneous. People look to police to solve the problem, but we aren't solving this." – SEPTA police Chief Thomas Nestel

On Tuesday alone, he said, a child was injured in an altercation at the 13th Street station on the Market-Frankford Line, and another fight erupted between students at the SEPTA station at 8th and Market streets. There were no reported injuries in that second incident.

The level of violence seems to be rising.

"There are kids getting broken bones – one girl lost vision in one eye," he said. "There is really serious stuff happening."

Last Wednesday's attack on Roman Catholic freshman Jimmy Fallon near Broad Street and John F. Kennedy Boulevard left him with an ugly bruise under his left eye. Fallon told 6ABC more than a dozen students attacked him after one of the assailants swung at him and he fought back.

Once he fell to the ground, the attackers kicked him and took his phone after it fell out of his pocket, Fallon said. 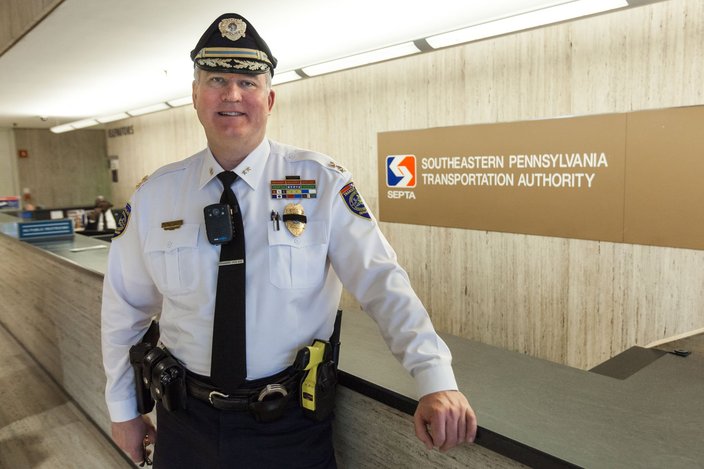 Moreover, many of the students involved in these altercations have an utter lack of respect for police. Once upon a time, Nestel said, a group of students might break up a fight and scatter when approached by officers. These days, he lamented, students are openly insubordinate and will engage in violent activity right in front of officers.

"The level of disrespect is just unbelievable," he said.

The disagreements leading to widespread violence after school dismissal varies greatly, but there is one constant in almost all cases: social media.

"It's social media-driven and it's spontaneous," the captain said. "People look to police to solve the problem, but we aren't solving this."

The problem is really a "parenting issue," said Nestel, adding the problem would be alleviated if parents made sure to know where their children were at all times after school hours.

Too often, he said, small issues that could easily be handled by police, then build and get out of hand because there are too many students "in the wrong place at the wrong time."

"They aren't going to the library down here. That library is empty every day after school," he said of the Philadelphia Free Library's Parkway branch at 19th and Vine Streets.

To combat the problem, Nestel said SEPTA transit officers are keeping a closer eye on groups of students riding public transportation after school hours. In addition, more plainclothes officers – trained to look for issues that lead to violence – are riding the subway.

Surveillance video from cameras in SEPTA stations, plus footage from the body cams worn by many of his officers, help the transit police hold violent students accountable for their actions, Nestel said

Finally, Nestel is very active on social media - you can find him tweeting at @TNestel3 - where he regularly communicates with SEPTA riders and members of the community to keep abreast of issues that might arise on public transit. With that heads-up, officers can often respond to incidents before they get out of hand.

"We are doing a lot of babysitting right now," he said.