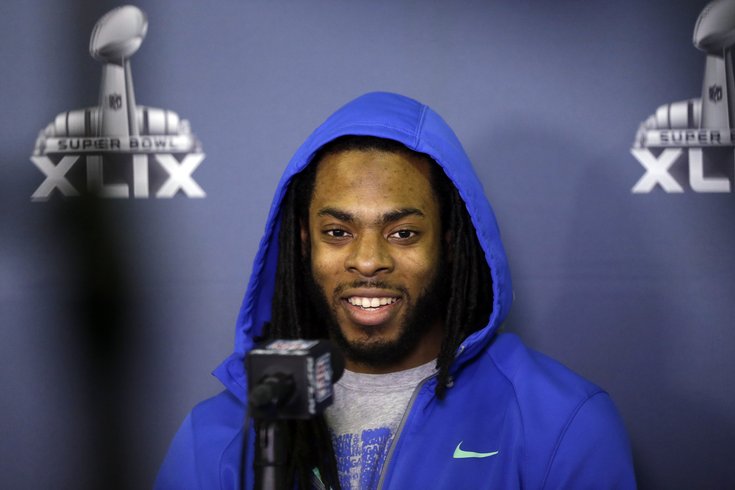 Richard Sherman answers a question during the Seahawks’ media availability Sunday in Phoenix.

PHOENIX  — Relishing no longer being in the "villain" role, Seahawks cornerback Richard Sherman is painting his team's Super Bowl opponent as occupying that position.

He also doubts that the Patriots will be punished by the NFL if they are found guilty of doctoring footballs in the AFC championship game.

"Not as long as Robert Kraft and Roger Goodell are still taking pictures at their respective homes. He was just at Kraft's house last week for the AFC championship," Sherman added. "You talk about conflict of interest.

"But as long as that happens, it won't affect them at all. Nothing will."

Patriots coach Bill Belichick said Saturday the team "followed every rule to the letter" in preparing footballs on game day. New England arrives in Phoenix on Monday as the league's investigation into under-inflated balls continues.

This is the second Super Bowl in which accusations of cheating have followed the Patriots. During their unbeaten 2007 regular season, they were fined $250,000 and Belichick was docked $500,000 for spying on New York Jets coaches' signals. New England lost to the New York Giants in that Super Bowl.

For many of the Seahawks, the focus on football deflation is a non-topic. Quarterback Russell Wilson brushed aside questions about the subject the way he escapes onrushing defenders. All-Pro safety Earl Thomas admitted he knew nothing at all about it: "I've been in my own little world. I don't watch TV too much."

Sherman, as always, was not reticent about discussing it.

"I think more people might be inclined to root for us, to see history made," Sherman said, noting the Seahawks are seeking to become the first repeat champions in a decade — when the Patriots did it. "I guess the controversy gives us a little edge in that respect."

When it was revealed that some of the Patriots' footballs were under-inflated in the AFC championship, Sherman said "I didn't think it was a big deal at the time."

The edge that Sherman plays with has helped him become one of the premier players in pro football. It also catapulted him into that "villain" role last year after his rant against 49ers receiver Michael Crabtree following the NFC title game.

He didn't understand the reaction.

"To be painted villains I guess you need to do something heinous," he said, "and I didn't. You learn a lot about people around you and about society."

While he was at it, Sherman also criticized the NFL for not coming through on the booty he is entitled to for being selected to the Pro Bowl. Players who make the Super Bowl are replaced for the Pro Bowl.

"Only thing I'm disappointed about is that we didn't get our gifts from the Pro Bowl," he said. "Which is kind of dumb; the NFL is the only league that punishes the players who actually make the all-stars by not giving them their gifts."

He believed the gifts included "watches and stuff."