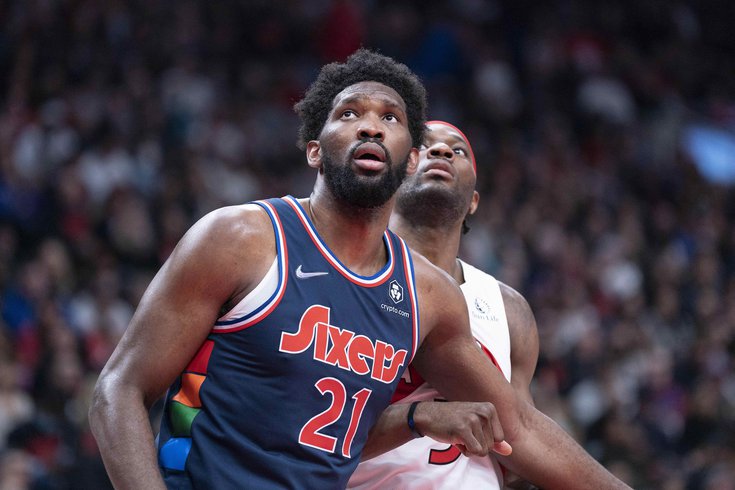 Joel Embiid boxes out for a rebound in Toronto.

TORONTO — His wrist and thumb wrapped with a soft brace once again, Joel Embiid sat at the podium on Saturday evening and dealt with a barrage of questions about his thumb, which he says will get an MRI on Sunday. The Sixers are heading back to Philadelphia with a 3-1 lead and a road victory under their belts, but they did not leave Toronto unscathed, nor did they play particularly inspiring basketball on the whole.

Embiid, like the rest of the Sixers who marched to the podium before their trip home, said that the most important thing to discuss and take away from the game was their performance, not his thumb or excuses or thoughts that focus beyond this series.

"When I go out there, I'm not really worried about whatever I can happen, I just want to take care of whatever I can, focus on whatever I can focus on," Embiid said. "It's painful, basketball you need to use your hand a lot."

"The biggest story is that we lost the game, we weren't able to close it out, and we've got to do a better job."

Well, Embiid almost got through his press conference without casting blame elsewhere. He saved passive-aggressive barbs for the officiating crew, headlined by Scott Foster and Ed Malloy, not-so-subtly suggesting that they accomplished what they were there to do — help extend the series.

The Sixers, mind you, did enough self-sabotaging on their own to render any officiating complaints useless. For the second consecutive game, Philadelphia was sloppy with the basketball (15 turnovers) and outworked on the glass (13-6 offensive rebounding margin), the Raptors' regular season strengths shining against a Sixers team that did not seem ready to play when the game tipped at 2 p.m.

"I just didn't think we deserved to win. I really didn't. Our guys have been great, but we weren't good tonight. That little mental part of the game where you have to come and play, I didn't think we had that tonight. I just thought they played harder, tougher, faster, more physical and good things come to the energy," Doc Rivers said. "It felt like when we actually executed what we wanted, we got a great shot... you can't win an NBA regular season game with the mistakes we made, let alone a playoff game."

Go down the list of available players and you will run into issues for just about every one of them, but starting at the top is the right thing to do. Embiid and running mate James Harden combined for nine turnovers against the Raptors, each of them contributing to Philadelphia's loss.

Passing, Embiid noted postgame, was one of the areas where he felt the thumb issue more than others. Indeed, there was a turnover on a pass to Tyrese Maxey in the middle of the floor where Embiid just straight up missed on the entry, perhaps a sign that his hand was holding him back from making a relatively easy play.

His decision-making, though, was at the root of a lot of bad possessions. The Raptors have continued to send waves of pressure toward Embiid in an effort to force the ball out of his hands so that someone else might try to beat them. Embiid hasn't been unwilling to pass out of doubles, but the Raptors have started reading some of his tendencies, such as his preference to hit the over-the-top pass to the corner when possible.

(There's another interesting angle to consider on this possession — OG Anunoby is willing to sell out toward Danny Green in the corner before Embiid ever makes the pass, leaving the ostensibly more dangerous Harden alone on the perimeter. Harden's spot is probably easier for a teammate to recover to if need be, compared to Chris Boucher leaving a player open in the paint in order to theoretically close on Green. But Harden's unwillingness to shoot catch-and-shoot threes is something the Raptors have picked up on in general.)

Embiid's real struggle was on the glass, where he pulled down eight rebounds but didn't look all that willing to bang with guys in traffic. That's where the intersection of sympathy for his pain and an understanding of what it takes to win playoff games happens — anyone with a brain and a functioning central nervous system can imagine how painful it would be to work from inside a thicket of bodies in an NBA playoff game, limbs flying and swiping everywhere. But if you're on the floor, you are ultimately responsible for doing what the task requires, and it certainly requires Embiid to be able to out-battle Thaddeus Young for defensive rebounds.

"I'm gonna adjust, I guess that means I'm going to have to use my left hand even more than I'm used to," Embiid said. "I thought I was fine shooting the ball, they were really aggressive about every single time I touched the ball, really everywhere on the court, they just doubled and tripled me. They tried to get the ball out of my hands, so I got to make adjustments, be more physical and get deeper touches."

Harden's raw numbers were a bit better than Embiid's, though his efficiency once again tells the story on offense. Philadelphia's perimeter leader would finish the game 5/17 from the field (including 2/8 from three), yet another poor shooting night for a guy who has had very few good ones since putting on a Sixers uniform. His head coach continues to insist that he's happy with the James Harden experience, and even offered that he thought Harden had a pretty good game overall.

But Rivers has frequently attributed poor stretches for this group to their lack of pace over the last two months, and Harden is certainly one of the faces of that.

"He's in the trees a lot, those are difficult shots," Rivers said Saturday. "He's also playmaking for us... it's the turnovers we got to cut down, and I still think there's a better pace for us to play."

Sometimes, it's a matter of Harden playing the style that made him a superstar, grinding down the clock as he sizes up a one-on-one matchup in front of him. Other times, there's a decisiveness issue, Harden getting the edge and then allowing defenders to get back into the play.

Frankly, this drive to the basket that ended with a block at the rim from Pascal Siakam registers as a positive for me, in that it represents Harden having the legs to get by Precious Achiuwa and go up strong to the rim.

The offense on this road swing frequently devolved into the James and Joel show, and not in a good way. Philadelphia played disconnected for long stretches of the last two games, something that seemed to impact Tyrese Maxey as much as anyone else. Doc Rivers approached Maxey for a lengthy conversation during a timeout in the third quarter, in part to remind him that he needs to seize opportunities and not let the game get away from him.

"It's clear for me when we're running our stuff, Tyrese is the benefactor a lot. And when we're not, he's not, he's just standing on the sideline a lot. I thought there were many times though that he had it and settled. We settled all night," Rivers said. "I asked him at one point, how many times did his fingernails hit the backboard, and he said once. I said I don't need to say much more."

The good news for Philadelphia is that they are still firmly in the driver's seat of the series, though the concern level should be a bit higher than it would be in a normal 3-1 series. Embiid's hand is a giant variable, and though Fred Van Vleet's injury looks bad for Toronto on the surface, he has been operating in a diminished form, and a longer, more athletic lineup might cause problems for Philadelphia.

For now, they are treating this like a good wake-up call, and a reflection of their own poor play, not a failure they need to find an explanation for.

"I told the guys after the game, I said this is probably good for us. Thought things were sweet," Harden said. "We had opportunities, we didn't convert like last game and they did. With that being said, it's 3-1. We've got to do those things, and we got to do them from the beginning of the game all the way to the end of the game.

"It's not about anybody else but ourselves. If we do that, we're getting it, we're growing as a team, which is a good sign for us."